Watcher of the Skies

The sky is pretty different in Mauritius, compared to Europe. In Europe, being situated north of the northern tropic (tropic of cancer), the sun always appears in the south. In European winter, the sun will appear on a flat path very much in the south, in summer on a rounder path higher up in the sky. But always in the south. Looking towards the sun, it will rise on the left and set on the right. At noon, it will be at its highest point, but it will – contrary to the often seen use of the term – never really be in the zenith, which denotes the position exactly overhead.

In the tropics, that is, the region between the northern tropic and the southern tropic, the sun sometimes appears in the south, sometimes in the north. In Mauritius, which is located close to the southern tropic (tropic of capricorn), the sun appears mostly in the north. However, around the end of the year, the sun will appear in the south for about a month, plus/minus. Hence, twice a year the sun is actually in the zenith at noon, namely on the day when it apparently crosses over from north to south, and then on the day when it crosses back after its “return” from the tropic of the south. Hence, twice a year, a pole exactly perpendicular to the earth’s surface (ie. pointing to the center of the earth), will cast no shadow in any direction. 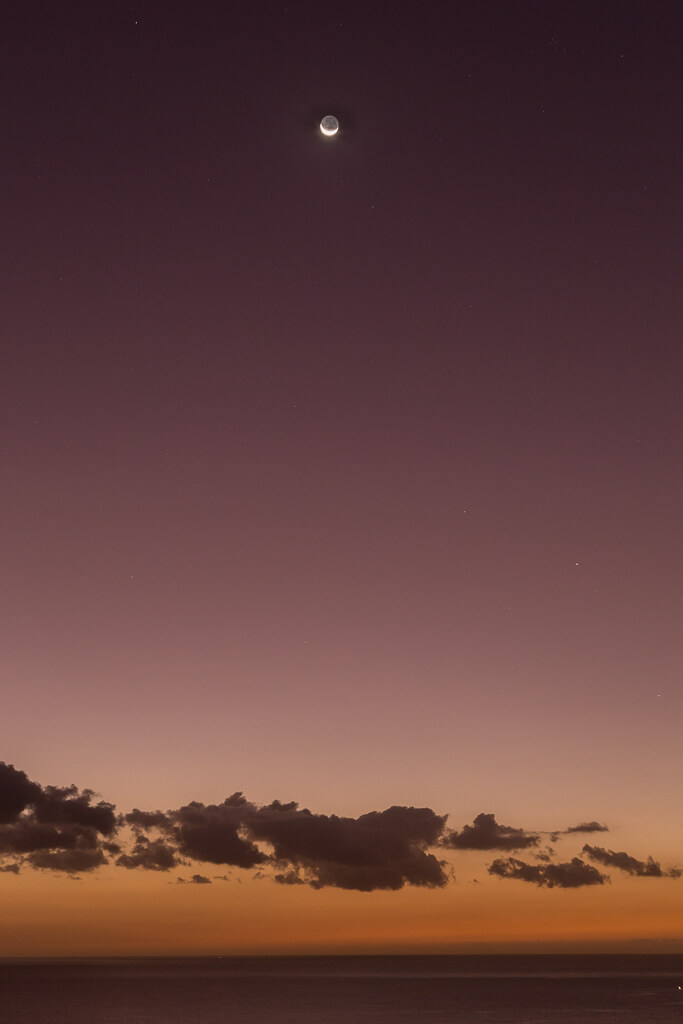 While the sun appears in the north, and the observer look towards it, the sun will rise on the right and set on the left. I know it’s obvious, when you think about it. But in daily life, simply being myself embedded in my world, and lacking a sense to detect if we live on the northern or southern hemisphere, it’s somewhat surprising at first, after decades of the contrary experience.

The moon also appears differently. In Europe, a waxing moon will be lit on the right side, a waning moon on the left. Here, it’s the other way round. And as the perceived paths of the sun and the moon are very perpendicular relative to the surface of the earth, not as flat as in Europe, the lit part of the moon can even be at its bottom or the top.

The picture was taken on 19 June 2015, shortly after sunset, a few days after New Moon, when the perceived positions of the moon and the sun were still in close proximity, and the moon is lit from the sun below the horizon.