I have been using notebook computers exclusively for more than 20 years. I just needed, and loved, the portability. Sure, I could have used a desktop computer when, well, at the office desk, and the notebook one for on-the-go. Actually I did that for a few years in the mid 1990s. But keeping two systems up-to-date and synchronised is just a PITA. Fortunately, notebook computers such as the MacBook Pro have become really powerful, so as I don’t do professional-level 4k-movie rendering, or frequently compile large software system, or any other such processor-hungry task, the still higher processing power of a desktop computer is simply not worth the aforementioned hassles for me.

Alas, using a notebook computer is sort of an ergonomic hazard, as the arrangement and positioning of the screen and the keyboard are far from ideal, enforcing a cramped body posture. About OK for on-the-go, temporary usage, but not healthy. 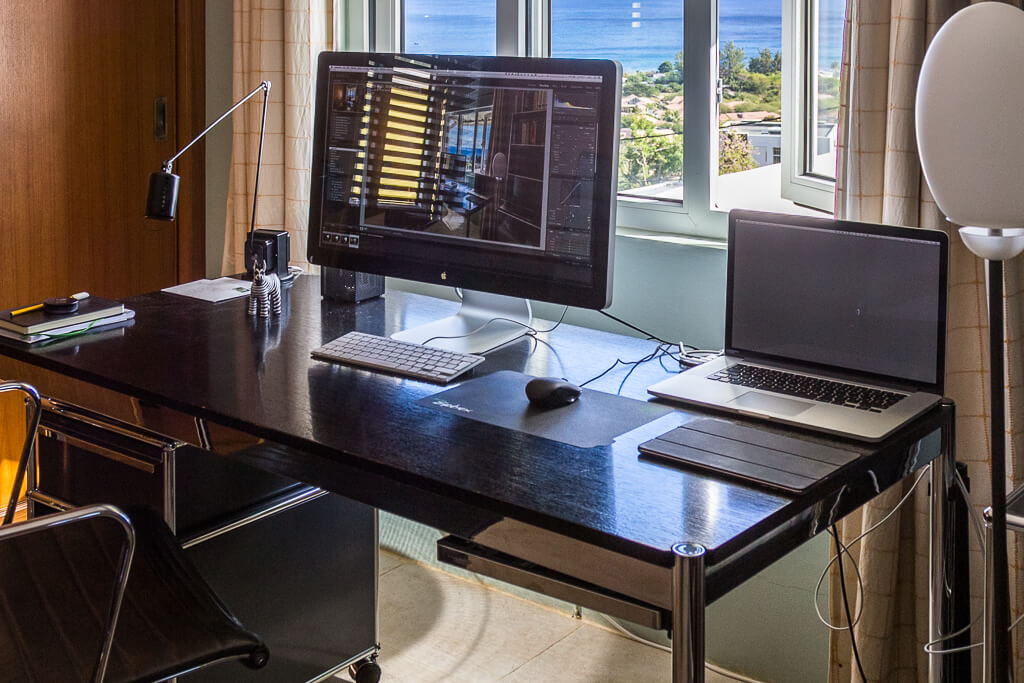 Hence, at my desk, I have been using an external display for many years, as well as an external keyboard and mouse. The notebook computer gets tucked away to the far edge of the desk, and the experience is pretty much the same as with a desktop computer.

Yes, I could put the notebook adjacent to the big screen, and also use the notebook’s screen in a two-screen setup, but as my main display is 27 inches, I don’t really need the additional screen estate.

Some weeks ago, my Mac wouldn’t start up. I heard two startup chimes, and I knew I was in trouble, even before I experienced a black screen. When even starting from a clone-backup disk didn’t work, I also knew there’s more to it that just some nasty disk corruption or failure. Disconnecting all cables and putting the computer right in front of me on the desk, I realised that the MacBook was “rolling” back and forth when typing – the bottom of the computer’s case wasn’t flat anymore, but bulging. Something inside was putting pressure on the bottom aluminium cover, and that something could only be the battery. I remembered that I had read, some time ago, about some bloated battery problems with certain MacBook models. No idea when this problem had started to manifest itself: alas, with my set-up, as described, I did not discover it, as I am not typing on my MacBook directly.

I had never opened this particular MacBook Pro before, and hence wasn’t familiar with the arrangement of the battery and the electronics. But obviously the swollen battery was causing the machinery to malfunction, and maybe even causing lasting damage to the electronics. Consequently I removed the bottom cover, which of course requires special screwdrivers, which to have handy when you live in the middle of the Indian Ocean is a good idea. Sure thing, the batteries are really, really swollen and bloated. However, with a sigh of relief, I couldn’t detect any physical damage to the electronics. 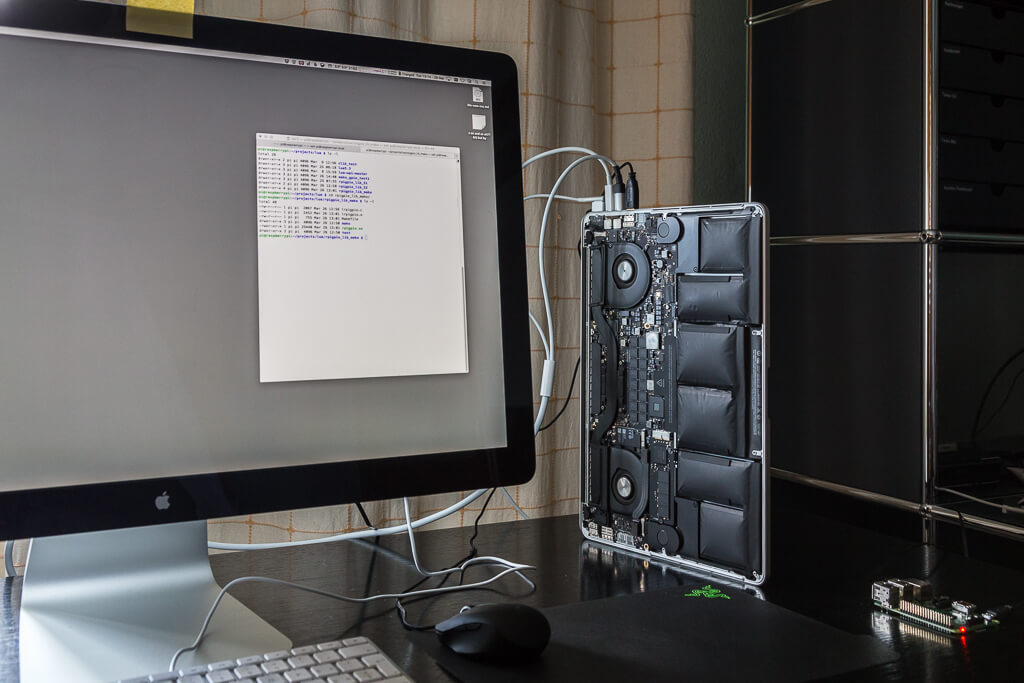 Better yet, after some attempts, and with the incantation of some Secret Arcane Spells, the Mac started up again. All seemed to work normal. Of course, I needed to place the Mac on its side, either typing on the built-in keyboard in vertical mode, or using the external keyboard. Also connecting the external display worked, so, aside from the strange position of the Mac, I could use it as before. Which I did for some time, just to see if there’s any weird behaviour popping up. But no, all normal.

I took the Mac to a certified reseller – yes, they even exist here on the island. Not astonishingly, they confirmed the diagnosis: battery gone bad. They could order and get a replacement part within “20 to 25 days”. Fair enough, at the end there is a price to be paid when living off well trodden paths of tech gadget civilisation. Even though one would think that getting a part from Europe with a provider such as FedEx or UPS would take only a few days. I have ordered stuff in the US and UK from here, and the shipping took two to three days. Anyway, the bummer was, or is, that they want to keep my Mac in the shop for all this time, even if I could use it in the meantime. Sure, I could use my older MacBook Pro, booting from the clone-backup drive. But the backup drive is a Thunderbolt drive with – really – spinning platters! Meaning in clear English: painfully slow. OK for a few days, but not a month. Or I could transfer all data to the older Mac’s SSD. But this is only a 500 GB drive, while the current one is 1,000 GB. And the current MacBook also has a Windows partition. And (re-) installing Windows was not something that I would ever want to attempt unless I really, really – I mean really – must do and see no way around. 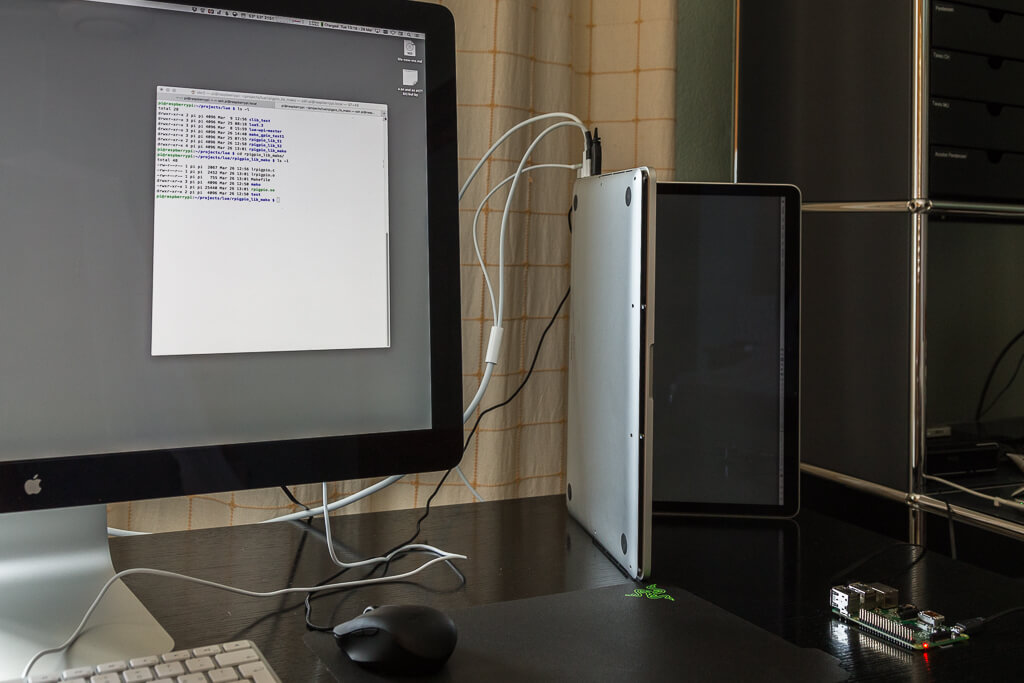 Bottom line, and to cut a long story short, I didn’t leave the Mac for repair, but took it home again. And I still have to make up my mind how to have it repaired. It was just too hot in the past weeks to think about all this and come up with a plan. Even more so as the Mac works fine, put on its side, using the external monitor, keyboard, and mouse. I just figured it would be better to protect the Mac’s underbelly with the bottom plate, against accidental touching and damage, so I screwed it back on using just two screws at the back, ie. where the hinge of the screen is, leaving it open at the front and giving the bloated batteries some room. I assume that this is also better for the airflow and the internal cooling.

I know I have to repair it, not least as I had to figure out a specific procedure to reliably boot it, be it into OS X or Windows. It includes arcane incantations and some voodoo. It sometimes does not work, and I don’t know why, exactly. When up and running, though, I don’t run into any problems.

I have no idea if the higher temperatures here have caused, or at least furthered, the bloating of the batteries, or if this would have happened anyway. When working on Desroches (Seychelles), I had often thought about what happens to the innards of a MacBook when the fans went into high gear while working on photographs and were pushing all this salt-laden sea air through the case. But this was the older MacBook, and I never had a problem with that one.

Good thing is, I still got AppleCare coverage, hence the repair will cost me nothing. Which is a calming prospect, as the batteries are glued to the top case of the Mac, which needs to be replaced as a whole. I guess that’s quite costly.