I was asked to take a series of pictures for a charity organisation that wants to collect money to repair the roof of a church down south-east in Mahébourg. Churches tend to be darkish inside, but have these bright coloured windows. The challenge here is that exposing for the high brightness of the windows leaves the rest of the picture in the dark, while exposing for the inside over-exposes the windows. Exposing for means to set the three camera parameters shutter time, aperture, and sensor sensitivity (“ISO”) to capture the light so that the corresponding detail (window, inside) appears in the picture as seen in reality.

I could have taken two pictures from the same position and perspective, with the different exposures, and then combined them into one resulting picture (HDR). But I consider this a last resort if everything else fails. Even if you have the camera on a tripod, the two pictures will be shifted by at least a few pixels, and while the HDR software is good with matching the originals on-top of each other, it’s not perfect, hence introducing softness. What’s the point of having a tack-sharp lens then? Exactly. 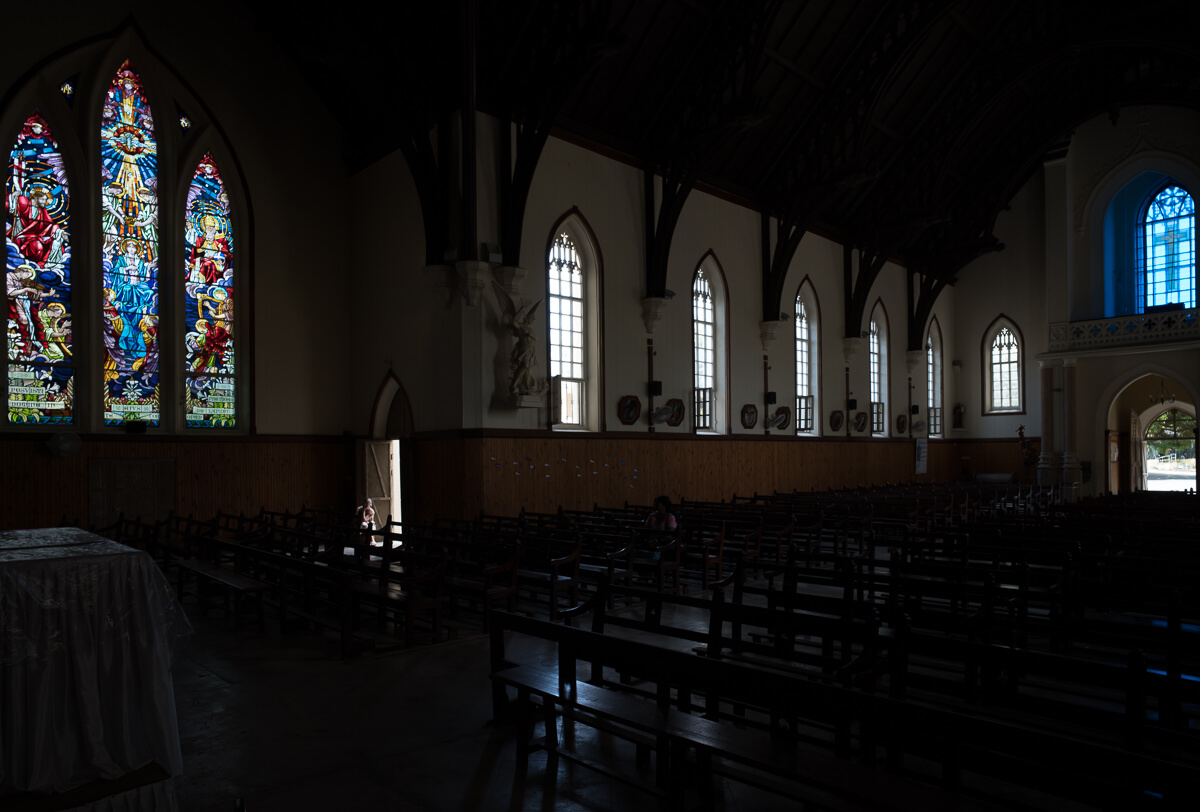 Instead I opted to expose for the windows, of course. I say of course, as you always expose for the highlights, ie. the windows here. Always. Overexposure can never be corrected. Overexposed (“blown-out”) pixels are simply white, and there is not detail information there anymore in the picture file. The luminosity values for the three colour channels are all one (“100%"). A paper printer would not put any ink on these spots. 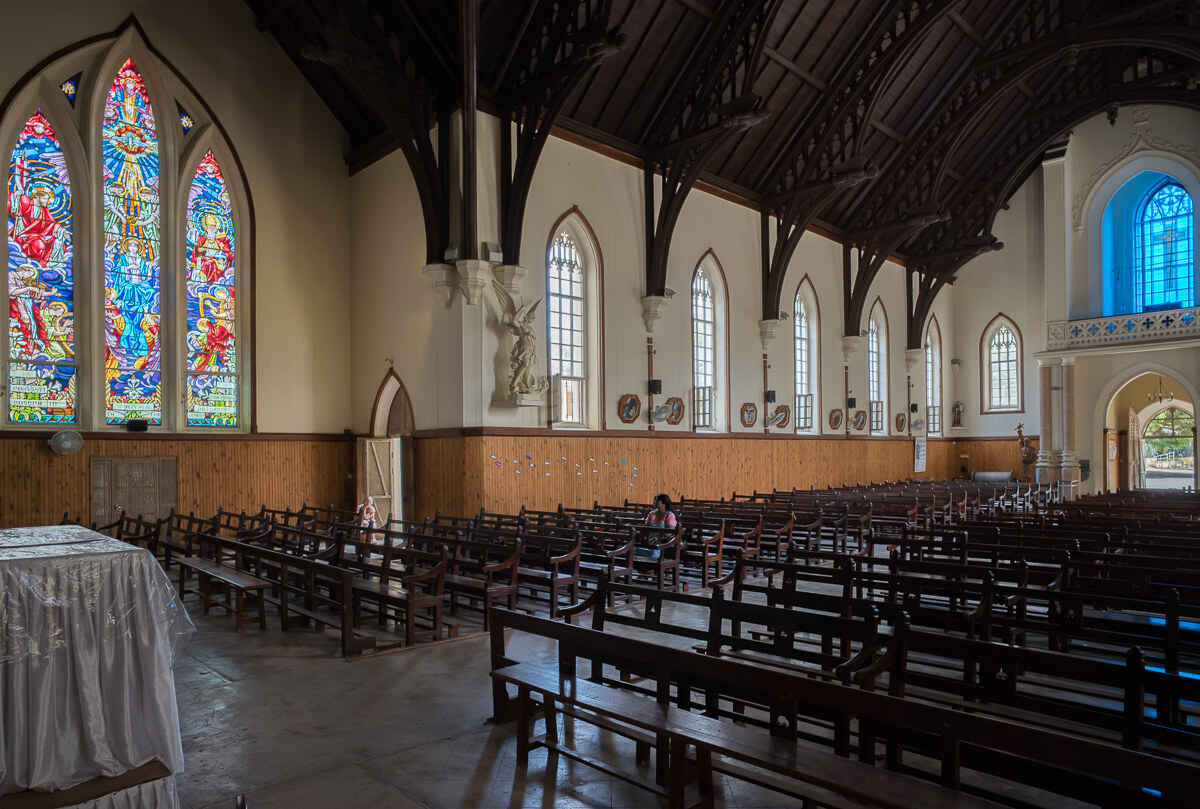 Underexposed areas can be salvaged, though. Simple: just multiply the luminosity values of all channels in the dark spots, technically speaking, right?! The problem here is that dark areas mean low values for the red, green, and blue channels as recorded from the sensor, and a nasty characteristic of all electronics kicks in: noise, which adds small random variations to the signals as recorded from the sensor. This random noise signal is always the same (at a given temperature), so small luminosity values get distorted more than higher ones, relatively speaking. Hence, amplifying (multiplying) the luminosity values also amplifies the noise, which becomes visible in the dark areas of the photo. Ouch. Noise is the bane of electronics engineers, and photographers. 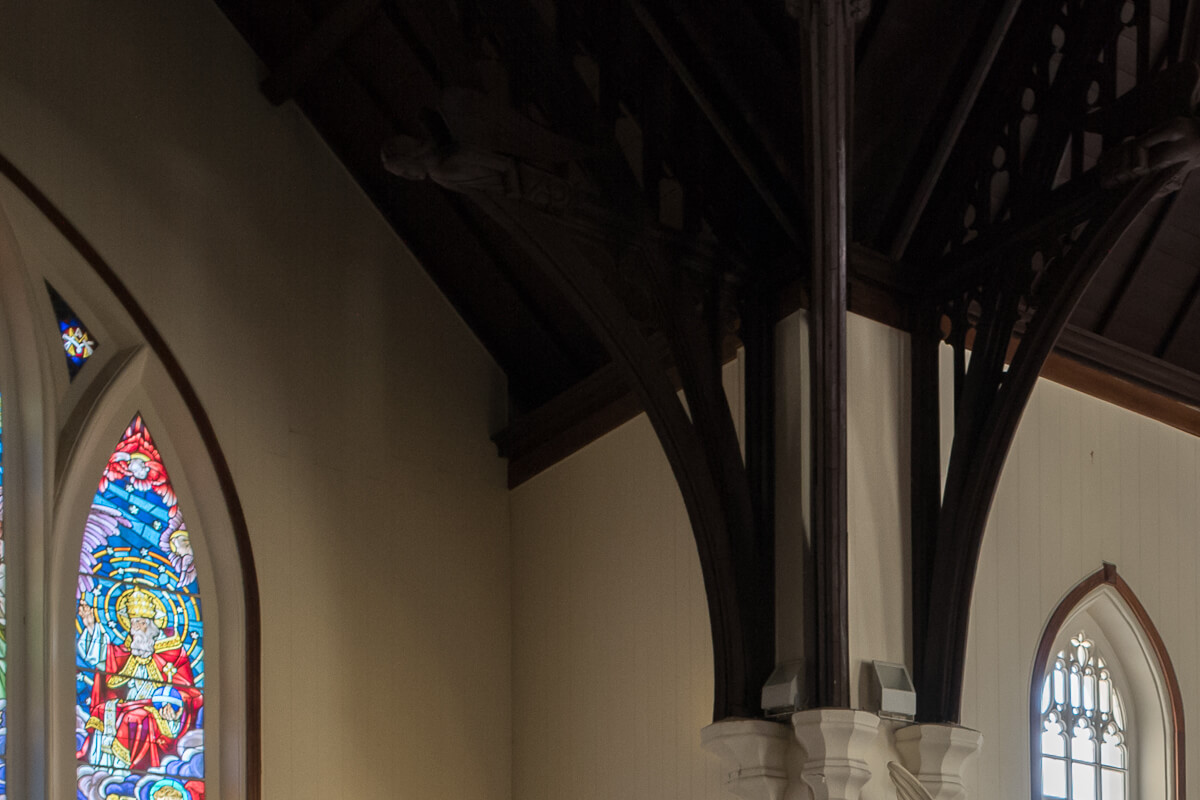 As you see, the picture as shot is really dark, underexposed but for the coloured windows. For the resulting picture I added 3.45 stops (!) of exposure in Adobe Lightroom, while at the same time pulling down the highlights to preserve them.

Noise? Nope! Behold the two 100% magnifications. No (visible) noise, and I left the noise reduction settings at their defaults. 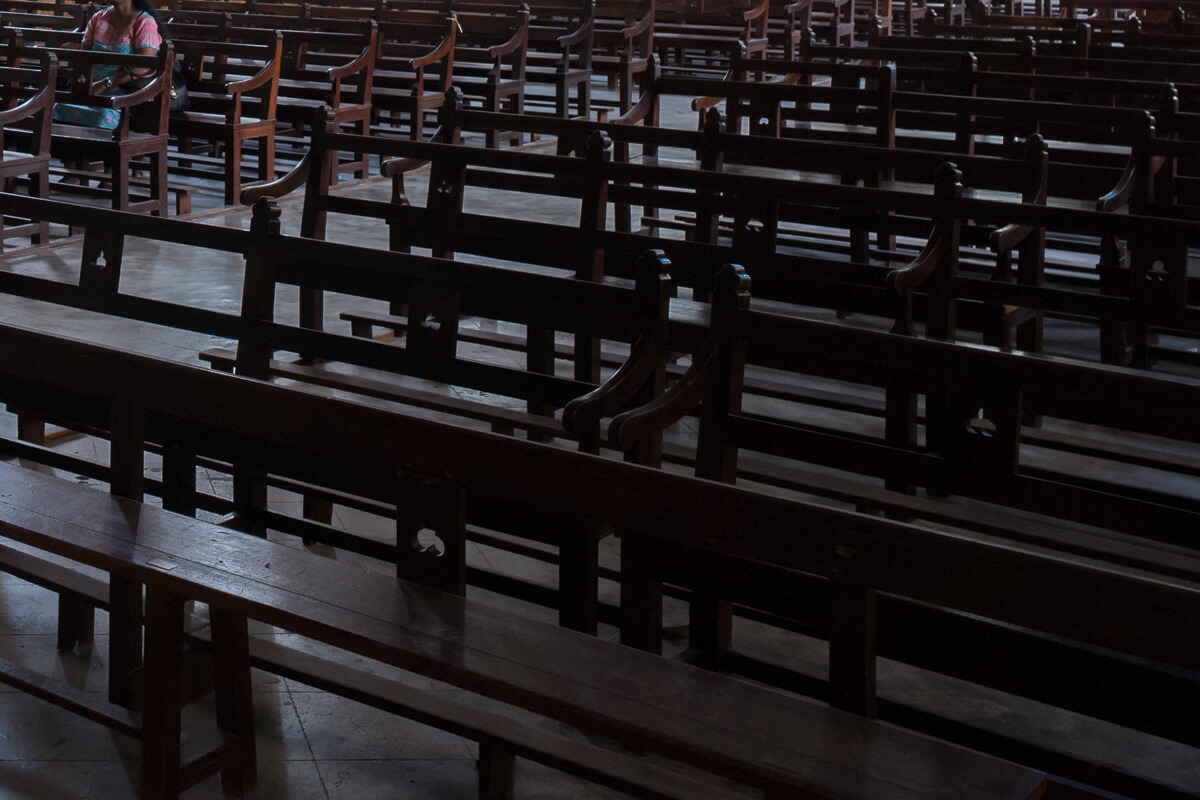 When I pulled up the shadows in Lightroom, ie. making the dark areas lighter, and they appeared out of the dark, noise-free, it was like magic. I have never seen this with any of my cameras before.

I knew, of course, that I had that kind of latitude with my new camera when taking the shot, otherwise I would have been effed back at my desk, developing the pictures for the customer. But it was nevertheless a first experience that made me dance a bit in joy. Literally. Yes, yes, I know… The camera engineers were able to create a sensor and electronics with low noise, and there might be some noise reduction wizardry in the camera’s digital processing path as well, but I don’t know. As a result, the camera has a pretty high dynamic range, ie. it can capture a wide range of luminosity values, from very dark to very bright, at top-notch quality.

The camera?! I won’t tell you, at least for now, as else you might think I am nuts. Suffice to say that I am very happy with it, also with the corresponding optics. More about the latter later. 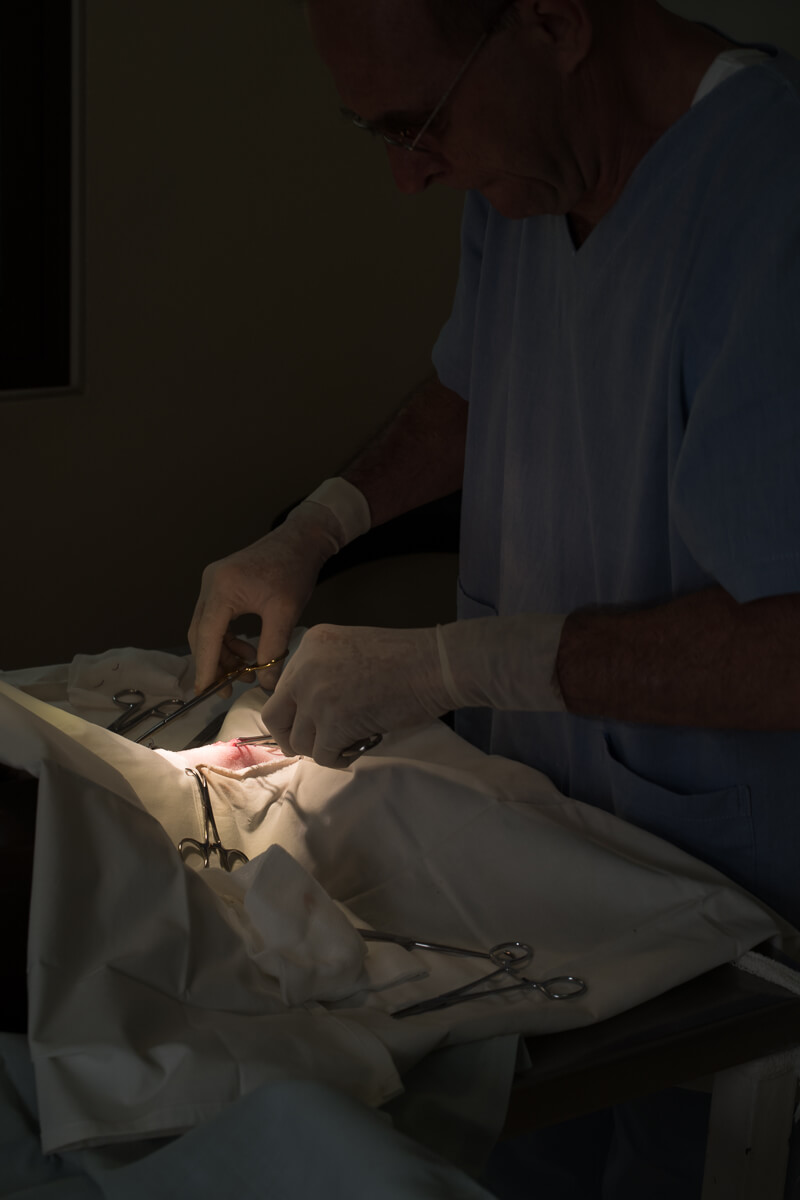 For now, another example, of a veterinarian doing surgery on a dog.

The surgery lamp is very bright. And I mean crazily bright. Which is nice for the vet, but an issue for the photographer. 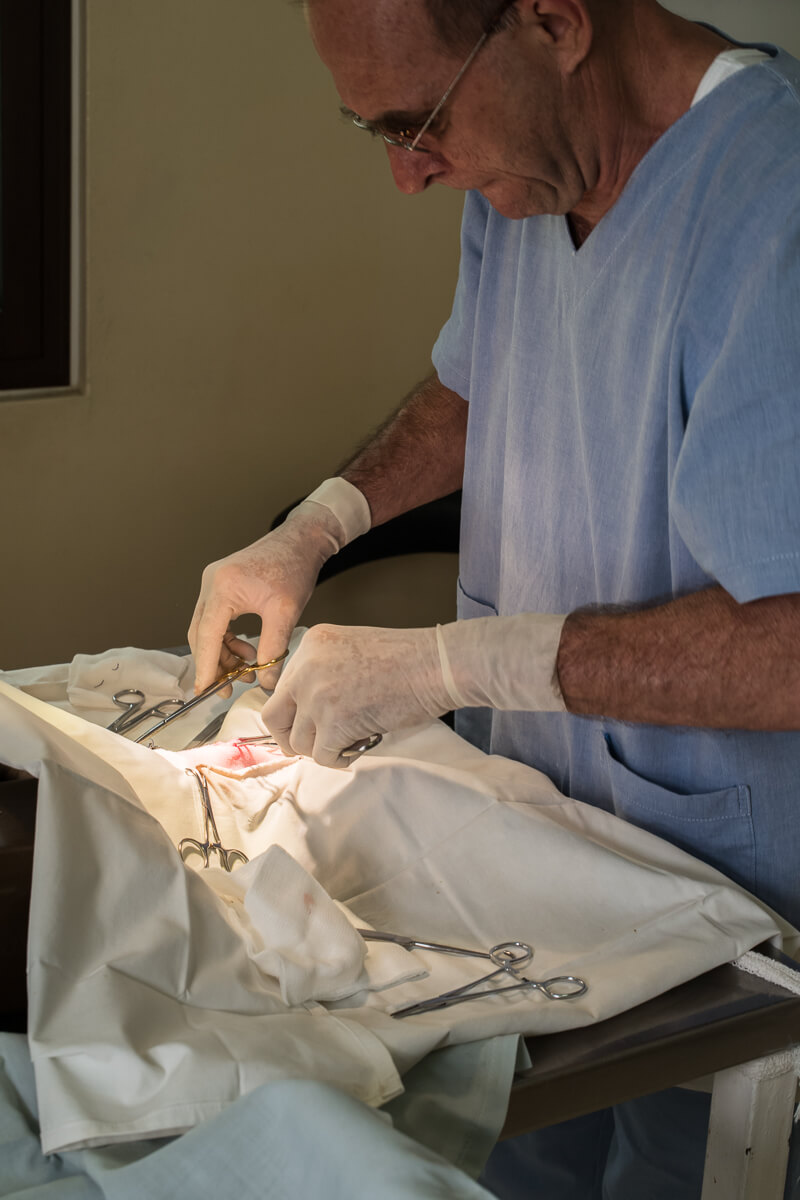 So, again, I needed to expose for the bright spot where the vet operated, otherwise that area would be simply a white blob, with no details, not contrast whatsoever. As a result, the surgeon is barely visible in the photo as shot.

Same as above, adding exposure (2.7 stops this time) and pulling down the highlights in Lightroom did the trick. The operating field under the lamp is nicely lit, with all details intact, and the veterinarian “appears”. The resulting picture looks about as perceived with my eyes and brain in reality (OK, a bit darker for the effect). 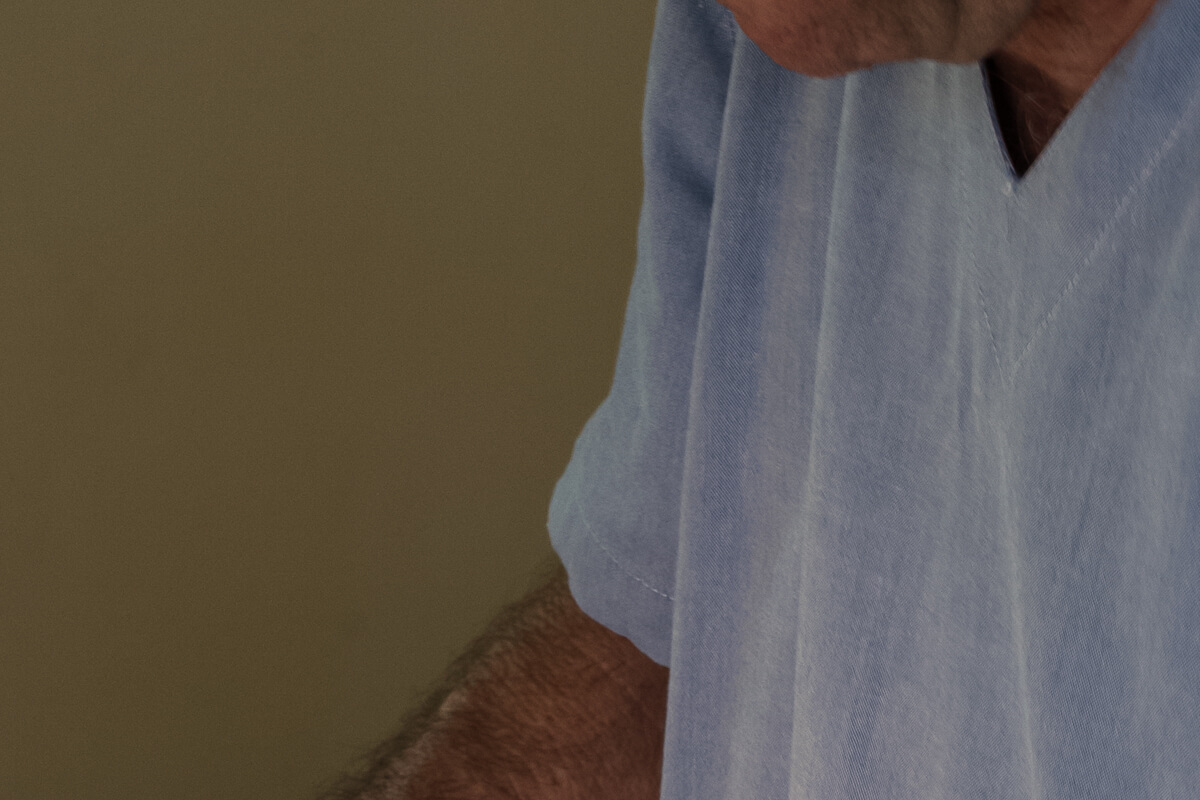 The magnification shows no noise, again without adding any noise reduction beyond Lightroom’s default settings. Pretty amazing. At least for me, it’s a new world.

Maybe I should have said this before, but in case this is not clear, here we go: such drastic picture edits are only possible if you shoot in the RAW format, which has a different name and actual technical implementation for each camera vendor (unless it’s DNG, which is a standard). RAW files are more or less direct recordings from the sensor, that is, the camera does not create the JPEG. The JPEGs on this page were created with Lightroom from the RAW files, after tinkering with the latter. If the camera creates the JPEG, all decisions how to develop the look of the picture are taken and fixed there, hence one has only very little latitude in the digital darkroom.

Shoot RAW, or both JPEG and RAW in parallel (most cameras allow this), unless you’re a sports or other events photographer, who needs JPEGs on the spot, quasi in real-time, to send to his or her editor for publishing. JPEGs are compressed 8-bit files, ie. with only 256 possible luminosity values per colour channel, and the compression is lossy: actual picture data gets thrown away, even if the camera had it recorded. Lost forever. RAWs have 10, 12, or even 14 bits, ie. 1024, 4096, or 16,384 possible values per channel, and if they are compressed, all data is preserved with most cameras and their specific RAW-formats (lossless compression). To add insult to injury, if you edit and save a JPEG, it will be recompressed, and the quality just goes downhill from there.