I found this post in my drafts folder. I probably thought it’s too odd and quirky to publish back when I wrote it. Then I forgot about it. Anyway, let’s have some fun now.

Some time ago, a friend pointed me to this personality test, mentioning that he found himself astonishingly well described by the results. As is my nature, I am very sceptical about these kind of tests, but hey, I thought, let’s have a look, why not.

I was positively surprised that there’s no need to register to take the test. That’s unusual these days, when everyone’s on-line game seems to be to collect as much personal and contact data as possible. Of course, you could register with made-up data, which is my modus operandi when possible, but they still could force you to give them at least an e-mail address by giving you the results only via e-mail, and leave a tracking cookie behind. They don’t.

Next, I poked around their descriptions of the methodology and some of the 16 personality types to get an overall impression. Yes, as to be expected, there’s some jargon you need to see and break through, but in general, I was not put off at least. 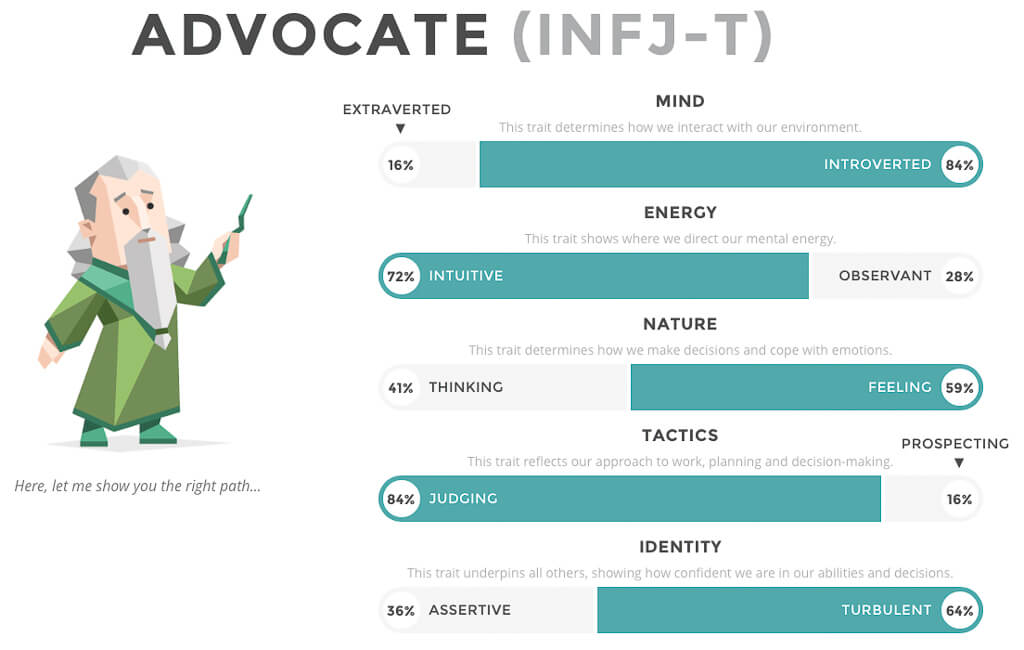 Taking the test takes some 15 minutes. I did a test run, just to see what kind of questions to expect, then a serious one. The result was “INFJ-T”. Each letter indicates one of five personality traits. Reading the corresponding descriptions I found that they are at least in the ballpark, ie. not completely off the mark. Of course, to state the obvious, everything should be read with a sceptical mind, not taking every statement and characterisation as absolute truth about you. I also assume that this test with its specific questions and results might not work well, or at all, for non-western people and civilisations (there’s even a category for our kind of society: Western, Educated, Industrialised, Rich and Democratic – WEIRD. Exactly.)

In addition, each trait carries a percentage, indicating its applicability. Hm. Being an engineer, I had this question: how stable is their underlying model to small changes in the answers to the question? What if I answered still truthfully, but with slight variations, that is, for example picking “fully agree” in lieu of “partially agree”, or the other way around, for certain questions? Realising that my percentage for the third trait (“F”) is close to 50%, it would be interesting to see if that could swing to “T”, again close to 50%, but on the other side of the spectrum. 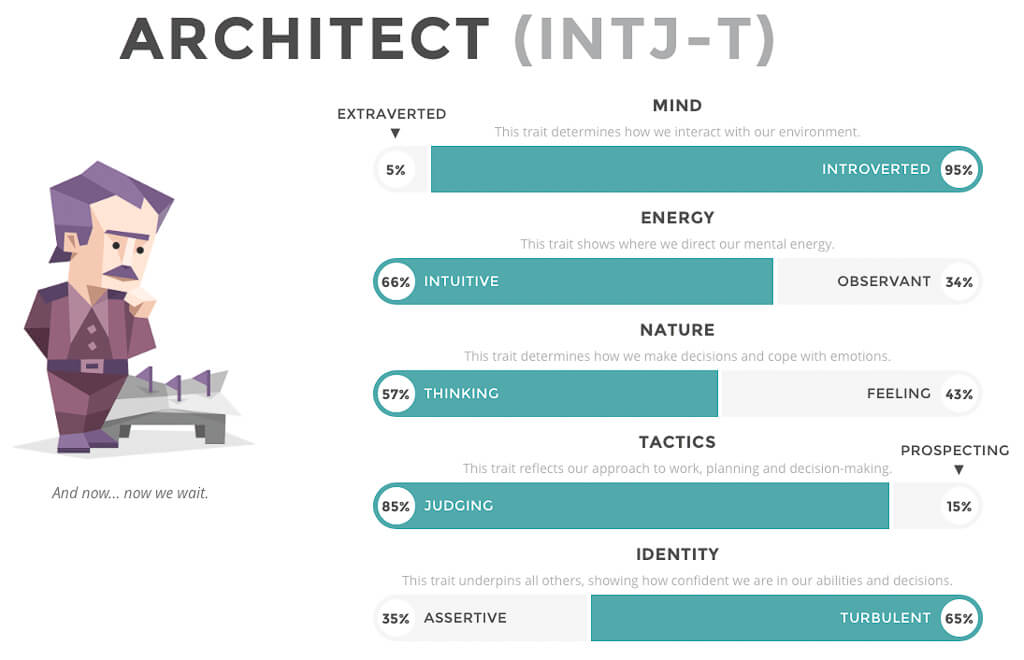 So, another run of the test. Just one, I didn’t try to game the system to get the expected result, by playing with the answers until I got there. And yes, the result was INTJ-T, with the third trait again close to 50%, while the other trait percentages stayed roughly stable. It seems I was able to guess the right questions to change the result. Which tells you something about these kind of tests in general, even though I have read reports that they are being used often by hiring agents these days.

Anyway, consider me officially classified between INFJ-T and INTJ-T. :)