So past Sunday I come home from a ten day Vipassana silent retreat – more about this in another post –, switch on my computers and walk away from the desk to let all backups and syncing and all that catch up while I do other stuff. 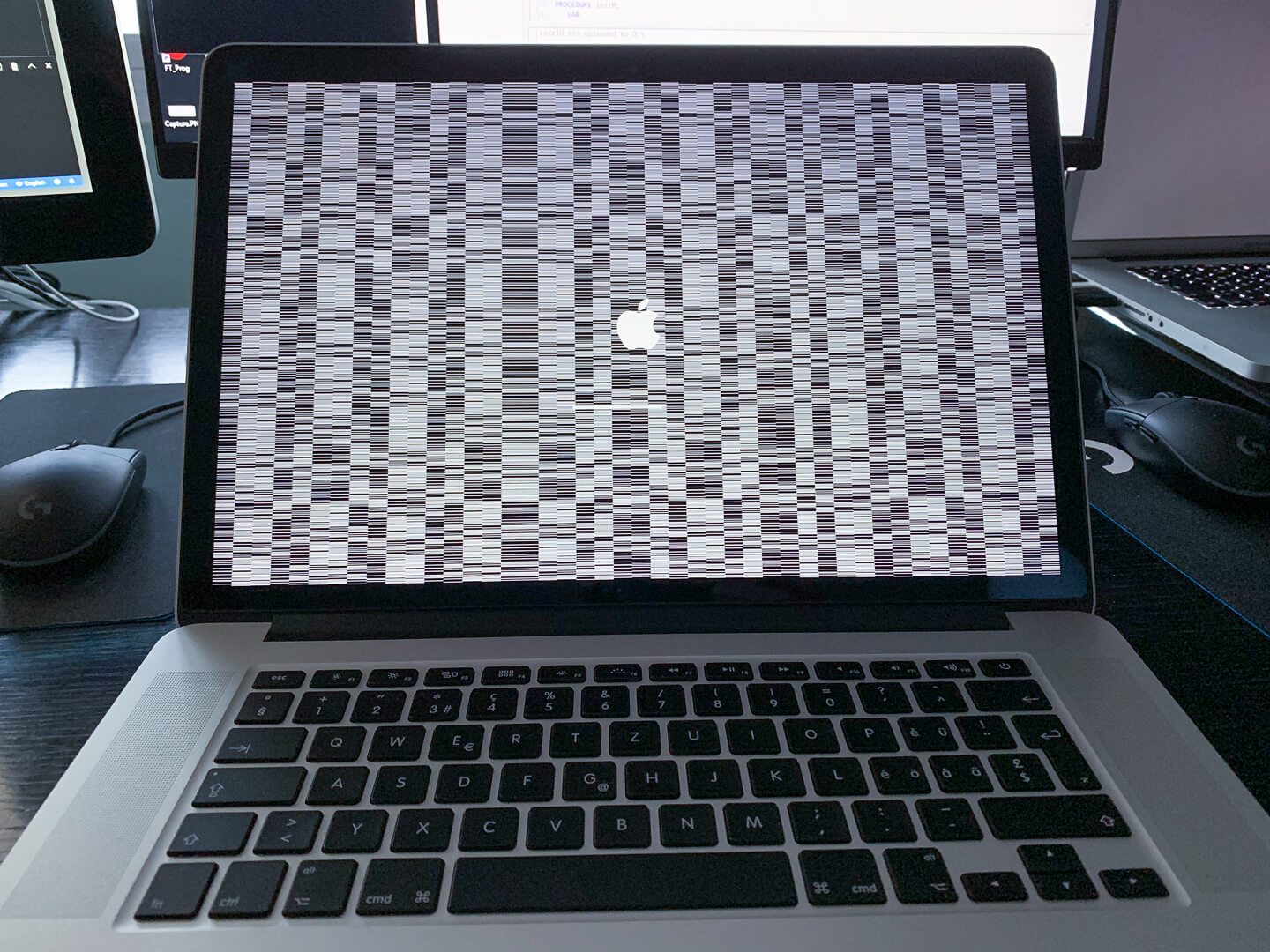 When I come back, my MacBook Pro’s screen looks funky, see the picture. Nothing a forced shut-down and restart can’t fix, right? Nope. Something is seriously hosed. OK, some times, unpredictably, it boots, but not into a stable state. Looks like the graphics processor is faulty. Which means a mainboard replacement. Ayo.

It’s a 2013 MacBook Pro model, so replacing it would not be an undue luxury. The problem is that Apple do not have a model I would even want to buy right now. The current models have flakey keyboards, and they really need to upgrade the cooling system, as I have mentioned before. Yes, yes, it’s the very same MacBook I have been bitching about here quite a few times already. The fun never ends. There are rumours afloat that there will be a new, completely overhauled model towards the end of the year. But – rumours.

For now, I have considered purchasing a Mac mini as temporary solution, which then could replace my even older Mac mini that I use as media system in the living room. But – of course – no-one has Mac minis in stock here on the island, and ordering one takes up to nine weeks.

I haven’t visited a repair shop yet.1 I already know that any repair will take weeks as well. Hence, for now, I needed another solution. I shortly considered moving everything to my Windows PC, but, first, Windows is a major PITA to be avoided unless it cannot be, and second, this would be a lot of work, to be reversed at a later stage when going back to a Mac. My motivation to get a Unix-y environment up on a Windows machine is rather low to start with. I know it’s way easier with the latest technologies and additions from Microsoft, but still. Not my cup of tea, and one needs to keep some minimal standards and dignity.

So – I have dug through my closet, and reactivated an even older MacBook Pro, a 2011 model. I cannot install the latest macOS version anymore on this hardware,2 but – yay! – it can read and write my APFS backup disk, and of course access the on-line backup service.3 It has only 8 GB of RAM, but a 512 GB flash drive, which must have cost an arm and a leg back in 2011. The MacBook has a four-core i7 CPU, with hyper-threading. This was a nice machine back in 2011 indeed. I guess it pays off in this case that I usually buy the strongest configuration of any Mac hardware, with the hope – or plan – that it will be useful for a longer time, well into the period when newer models on offer have replaced mine.

I am writing this article with the ancient computer. It works just fine for this kind of work. It can drive my 27" display at 1440p, which is useful. I tried running some more demanding tasks, such as photo processing, and yes, it’s slow-ish, but not that much slower than the defective MacBook. Which should not surprise me, thinking about it, as they’re only one or two generations apart. If memory serves, the 2013 model was the first, or one of the first, with a Retina display, which was my reason to get it and not skip generations. I guess I would – or will – be surprised at the power of a modern notebook, let alone an iMac.

Yes, I am aware that all this is very much a first world problem. Nice to have issues of that sort, right?