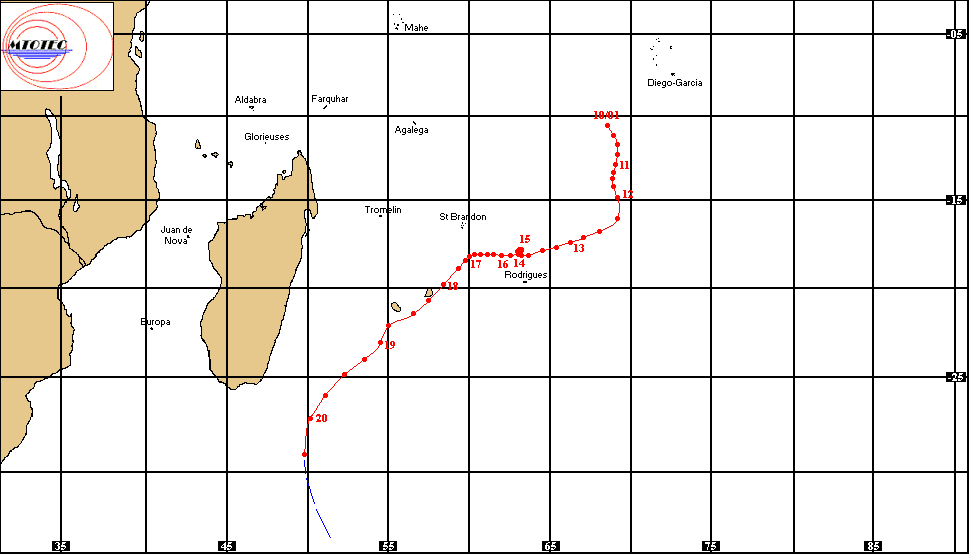 Berguitta has passed Mauritius in the night from Wednesday to Thursday. I would have expected that, given the circular shape, there would be increasingly strong winds both when the storm approaches and also when it travels away. No. It was still rather quiet on Wednesday evening, but then the winds and the rainfalls built up quickly within a few hours. Somehow the tail end of the circular storm behaves differently: when the storm moved away from the island we had much stronger winds and gusts, over a longer time of maybe a day until Friday morning.

From about midnight into the early morning hours it was the worst. I stayed up watching movies, let the dogs inside for shelter, and was ready for any quick fix and remedy for any problem or damage. The electricity went down a few times, but for only ten-ish minutes. Once I needed to go outside to reset the generator when it didn’t start automatically. All communication, ie. mobile phones and Internet, stayed functioning all the time.

But in general, we at the west coast were not hit really hard, luckily. I have no damages to write home about, and neither has everyone I chatted with around here. The folks on the central plateau and especially in the south-east had more problems and also have some damages, as Berguitta passed just south-east of the island.

Sunshine this morning, now, as I write this in the afternoon, we have a normal tropical rain, but no wind. Back to open windows and doors day and night. I have come to really hate closed rooms.

However, after the storm is before the storm in cyclone season. Tocca ferro.