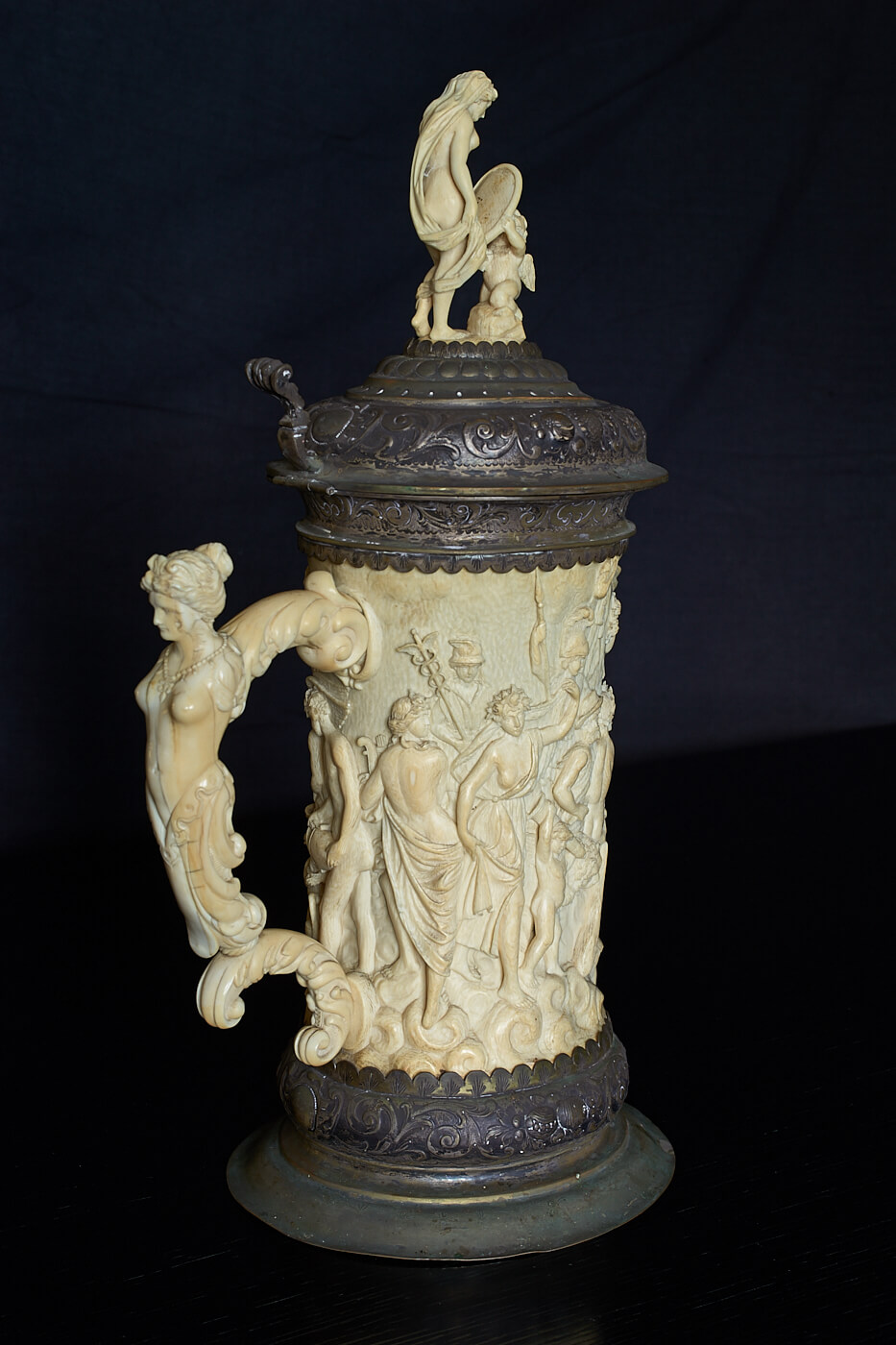 My friend Corinna has this beer mug, which had belonged to her father. It’s carved from a segment of an elephant tusk, so these days the creation and acquisition of this object would be highly questionable, maybe even illegal. It’s from a different era, though. It even seems to quietly tell stories about the old days. Of colonial rule, good and bad. Mauritius was a British crown colony since 1810, while before it was under French (1715–1810) and Dutch (1638–1710) rule.

The island became independent in 1968, however still with the Queen of England as head of state. Only in 1992 Mauritius became a republic, as a member of the Commonwealth of Nations. Today, Mauritius is one of only 19 countries considered a Full Democracy according to the democracy index of the Economist (at the time of this writing) I know, this kind of ranking has many questionable aspects, but my point is simply that Mauritius does pretty well even compared to “western” countries, let alone many former colonies. But I digress. 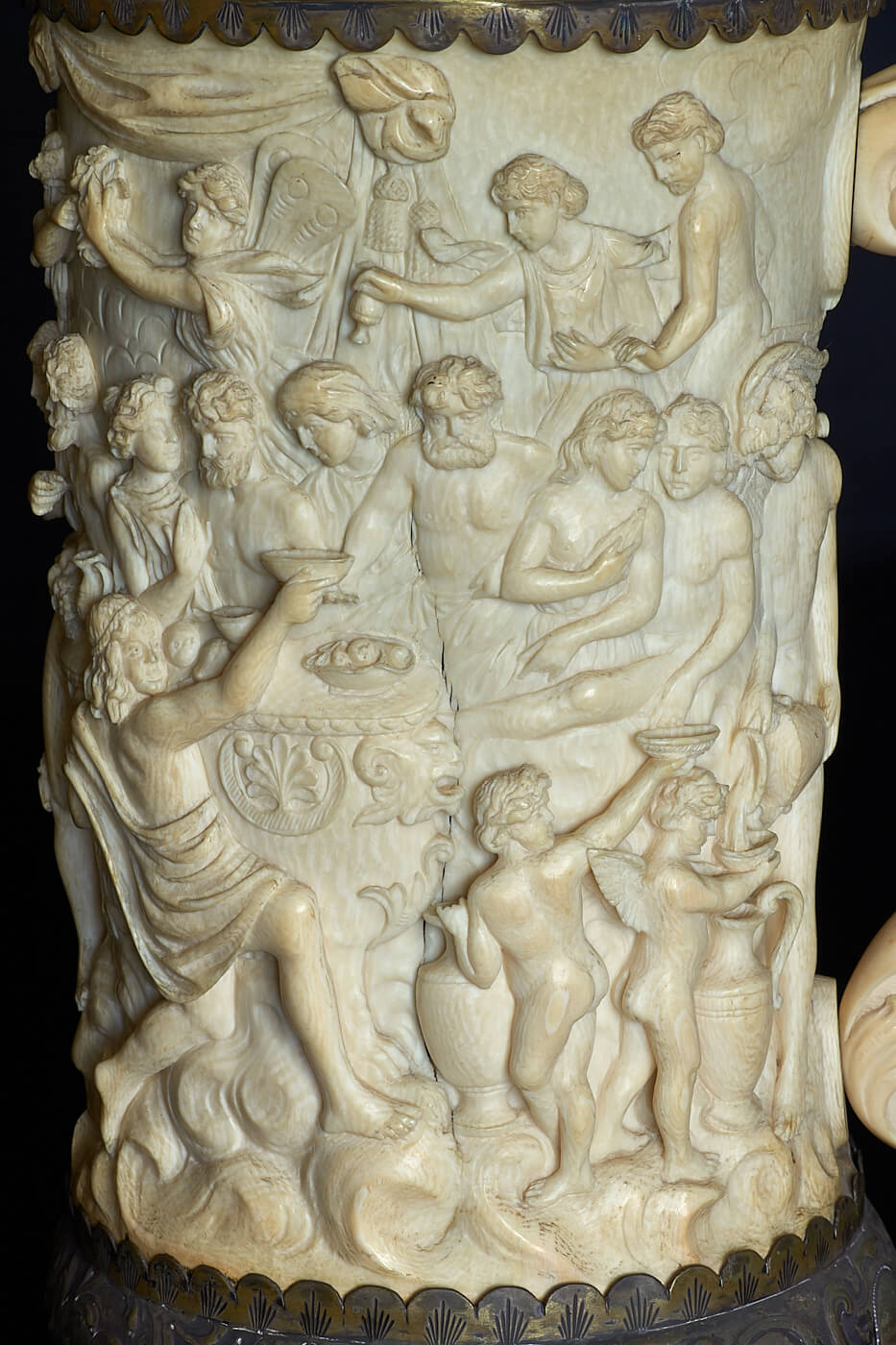 The craftsmanship on that mug is pretty amazing. I cannot even imagine how one is able to manually carve all the details, while creating the overall picture and scenes across the curved surface. I mean it’s ivory, so the craftsman (or woman) had only one attempt to get it right, I must assume. Steady hand, sharp eye and mind. The mug is somewhat sexist, with a bare-breasted woman as handle. Really?! Again, it’s from a different era, but in my view this is, and has been, wrong at all times. To be clear, it’s not the display of nakedness, my point is that the drinker grabs the mug by the naked woman. It’s rude and disparaging. 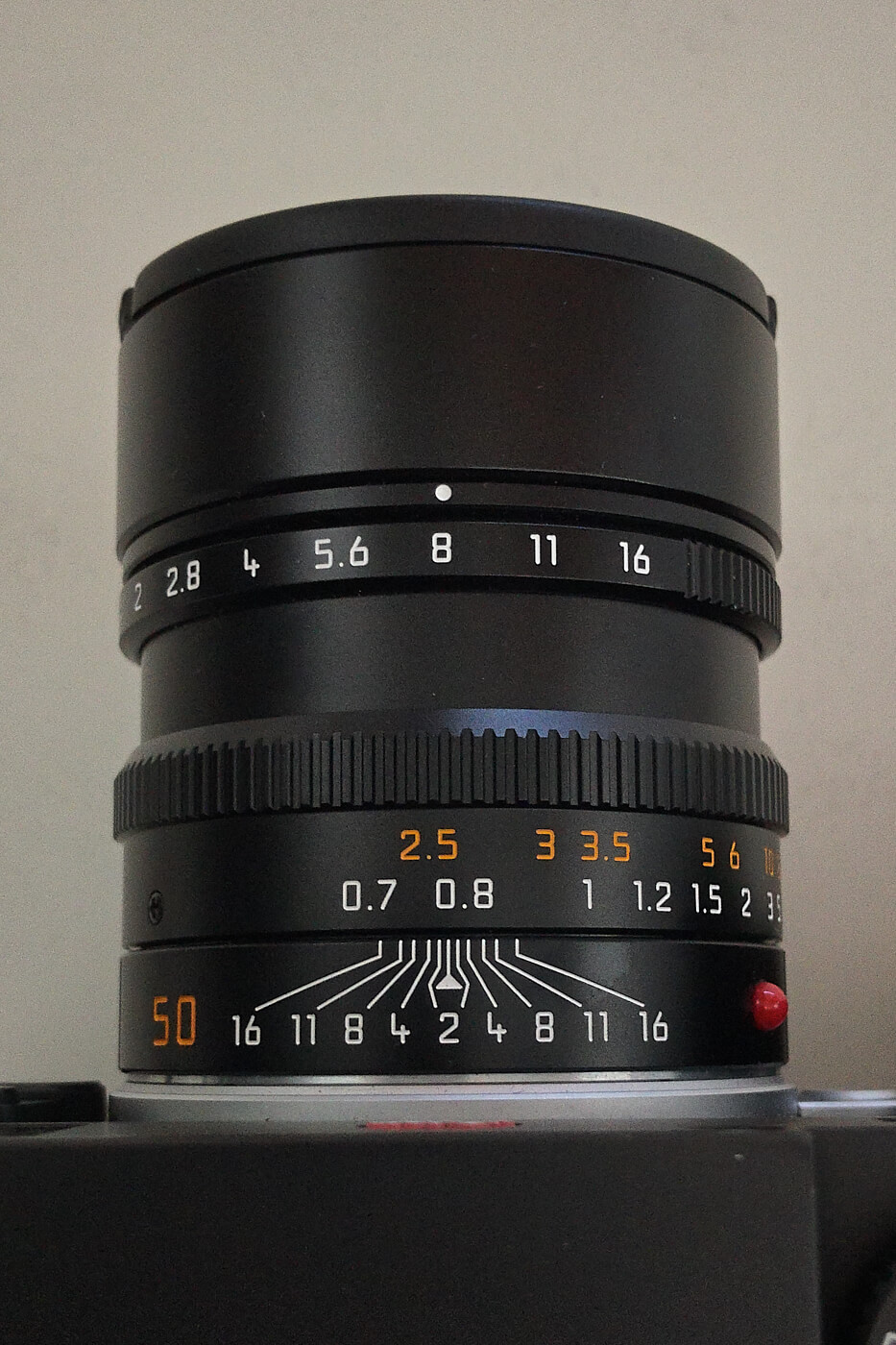 Corinna wants to give the mug to a museum, and asked me to shoot some pictures, which she can send out to see if there is, or where is, any interest. I had to improvise a little product photography studio. I used indirect daylight from the a window in my living room, as I don’t own any studio lighting equipment. Indirect daylight is nice, though, as the sky acts as huge diffuser, so there are no harsh shadows on the object. An overcast sky is even better.

The picture background? Hm. I had to think about this for a bit. I mean, no-one wants to see my TV or bookshelf behind the mug, right? It would look pretty amateurish. I knew I couldn’t just work with the bokeh of the lens to blur the background sufficiently, as I needed to step down the aperture to 8 or even 11 to get the required depth of field on the mug (see the DOF markings on the lens). 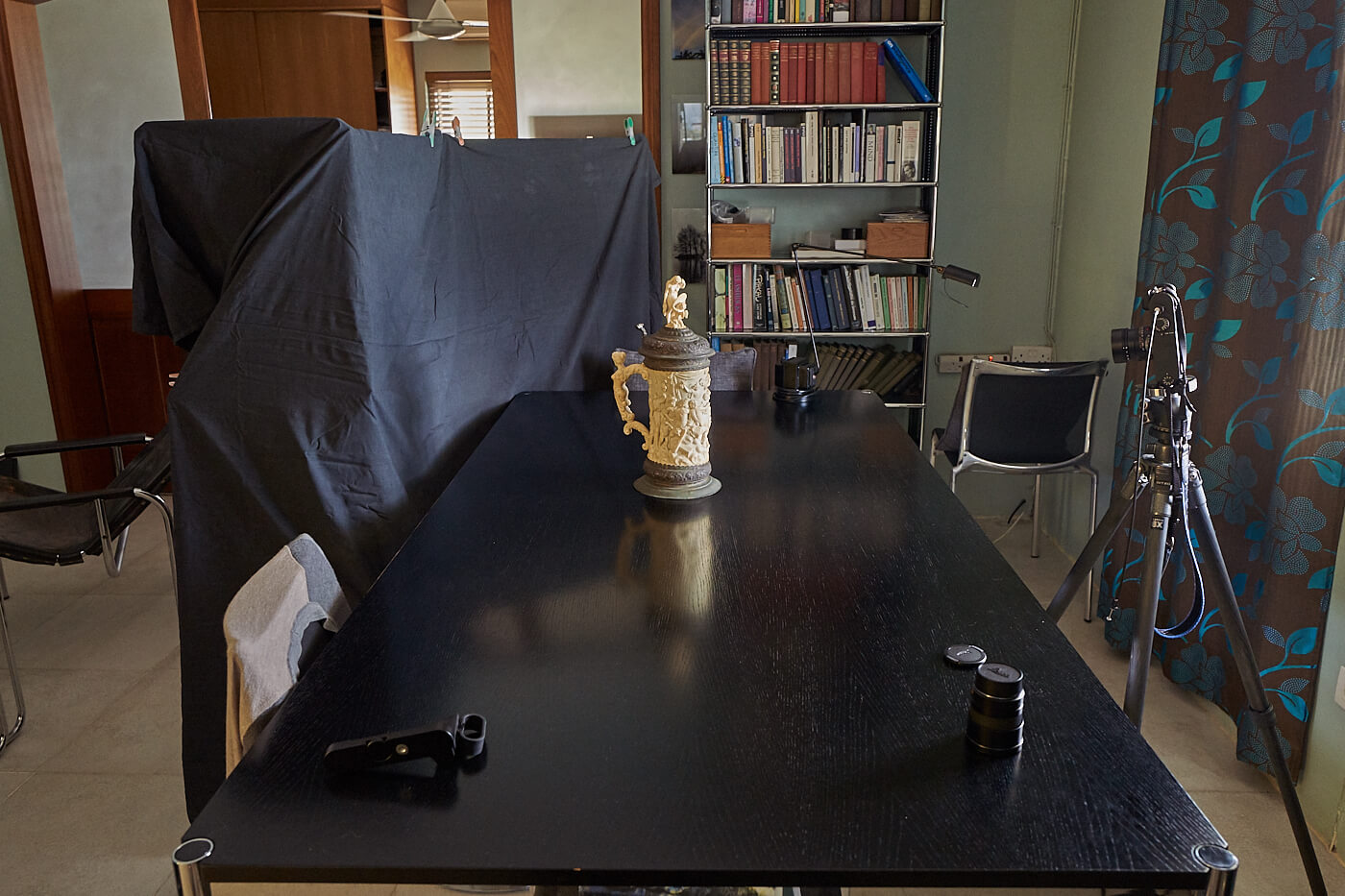 I then remembered that I had some coloured sheets in my storage room, among them a black one, which probably would work. So I just needed some scaffolding to hold the sheet up. Hm again. Double hm actually. I didn’t want to spend thousands of Rupees for some professional tripod-y thingies, aside from the fact that I probably would have problems even finding these on the island anyway. 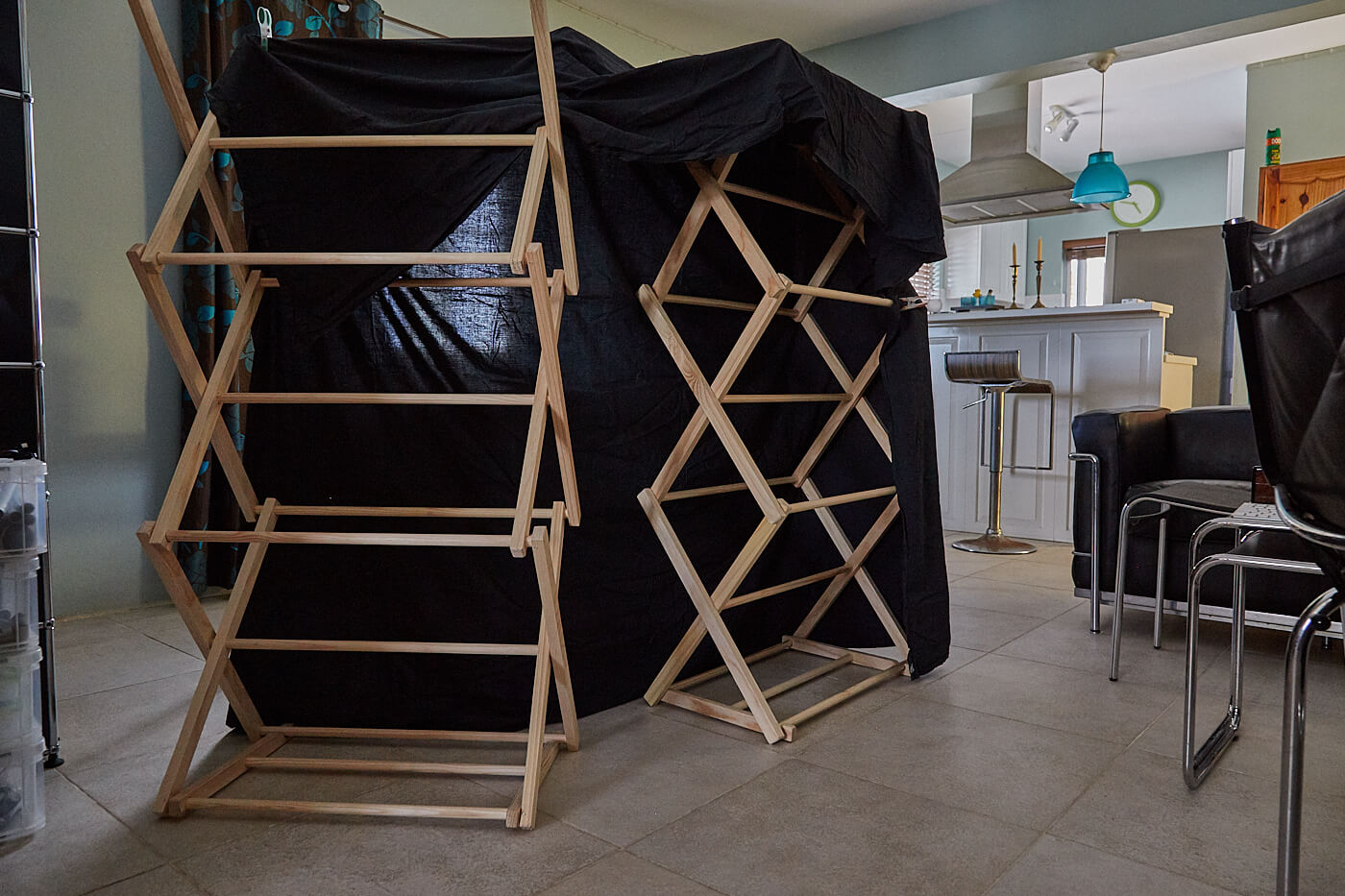 The solution occurred to me when sitting on my verandah: laundry racks! A specific type thereof, that is, a wooden laundry rack that people here often use to dry their beach towels and swim suits. They can be folded and stored away, and propped up quickly as needed. Very useful indeed.

At the end, this set-up turned out to be pretty workable, as the photos hopefully demonstrate.

And bottom line, I am satisfied how the mug pictures turned out. 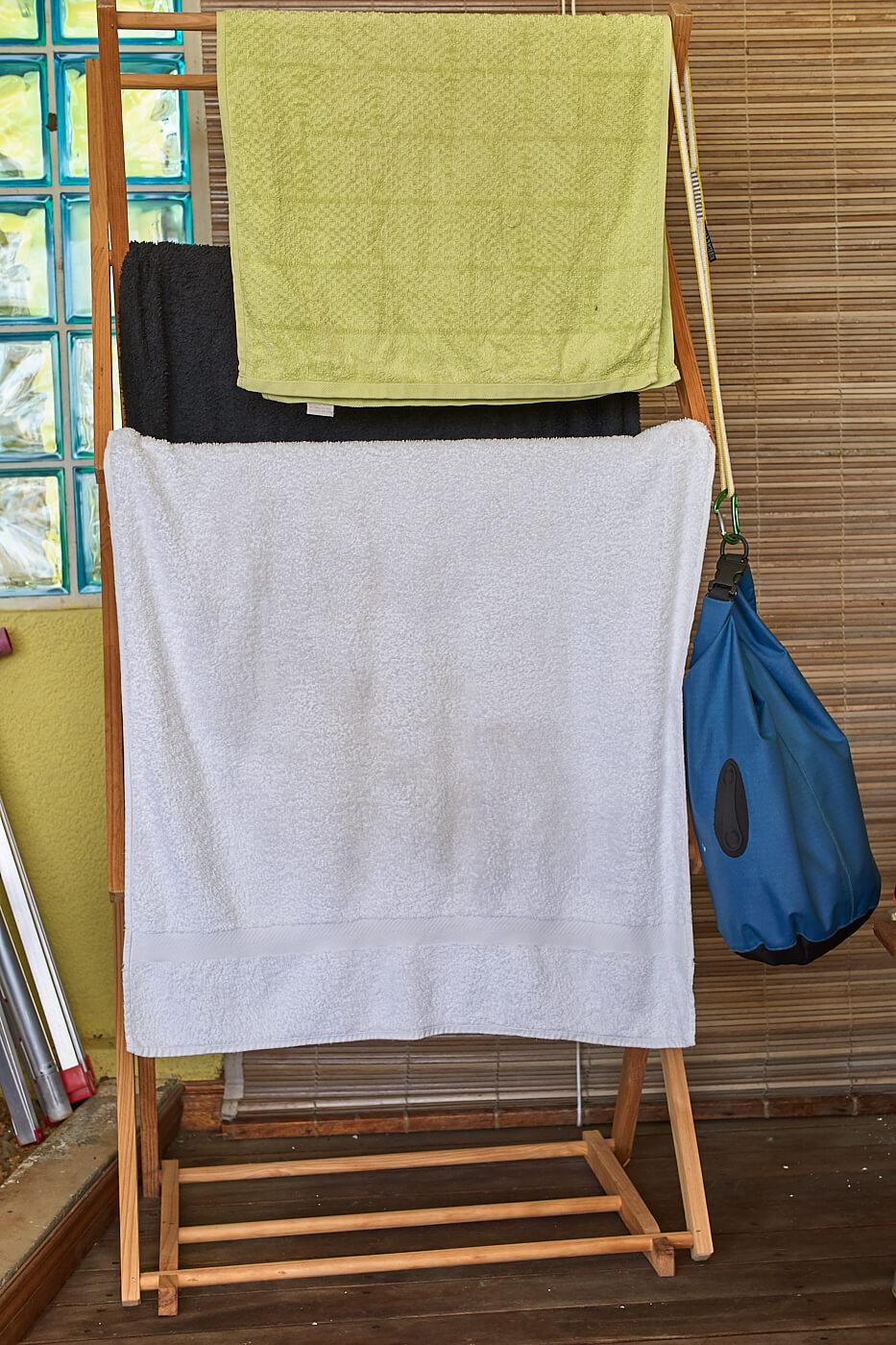 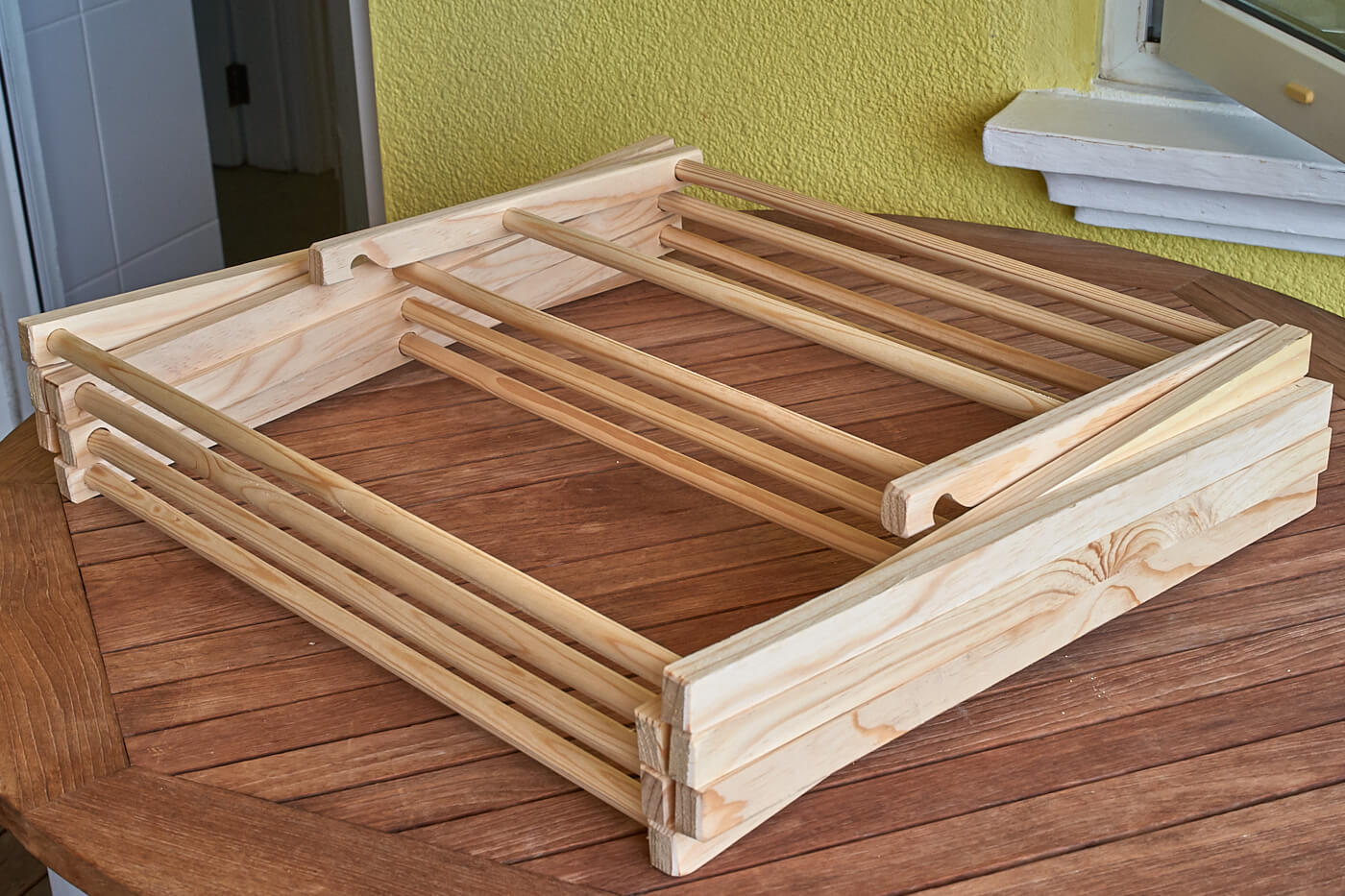 For perspective, this is the actually intended use of the laundry racks.