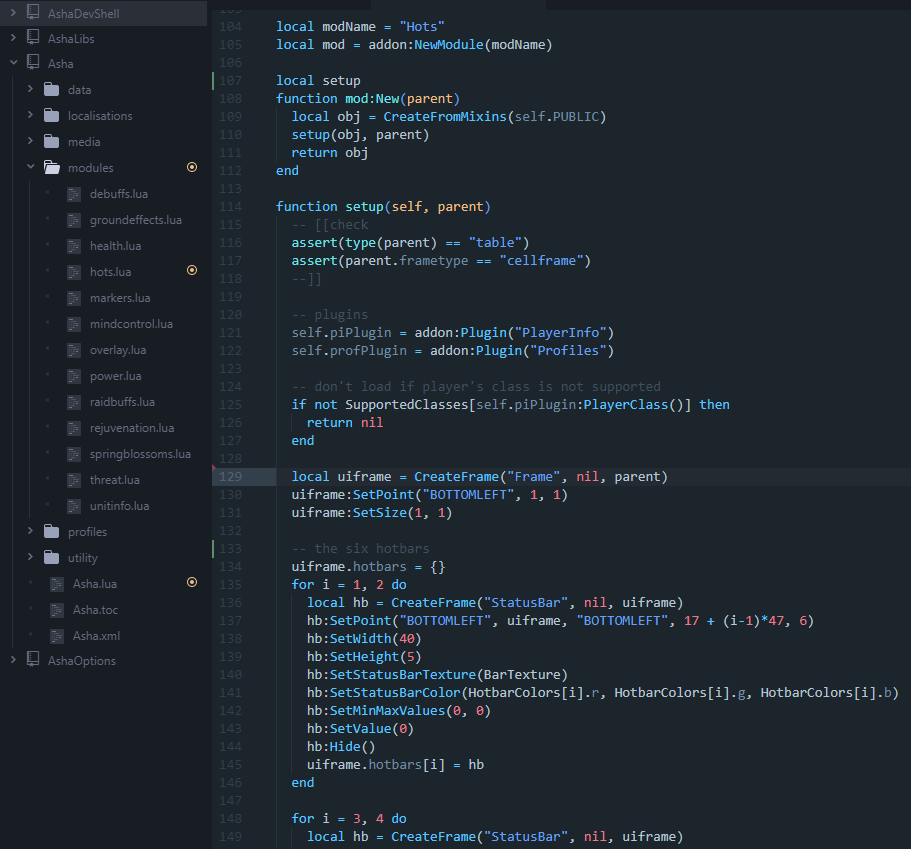 Busy times. I might talk about them later, for now look at the screenshot to guess – or know, depending on your nerdiness level – what I have been doing. Yes, it’s Lua code, but that would be too easy. Look closer. :)

Luckily, winter slowly gives way to warmer temperatures again, even though I still use a 5mm wet suit for diving, which I never needed to do in earlier years here. And I am cold anyway after half an hour. I guess I am really growing old now. Or getting increasingly accustomed to the tropical climate. Or both.

A few months back, I finally had the opportunity to watch Westworld. My Internet provider offers a TV subscription, and on top of that what they call “video on demand”. Really. Who still uses this terminology these days? Anyway, that video on demand service includes some HBO programming, and HBO has some good stuff, from Game of Thrones to The Sporanos to Boardwalk Empire to The Wire and so on. And as said, Westworld. I had tried to purchase the series on DVD, but to no avail. So when I saw its availability via my Internet provider, I subscribed. In fact, only for Westworld, as the other major series I had already watched on DVD long time ago. The watching experience is not great, not least because the user interface of the required set-top box is awful. Clunky, slow, high latency, ugly. If you think Netflix’s user interface is bad, you’d be surprised how much worse it can get. But I digress.

Having heard and read so much about Westworld, I simply had to watch it. There are two seasons by now, and I just about to finish watching season two. I am massively disappointed by the second season, but maybe I’ll have to re-watch it, as I did with season one. But I doubt that I will discover much more in season two, it’s crude and superficial, compared to season one, where a single dialog could be crucial for a deeper understanding.

But let me not get ahead of myself. In case you haven’t watched it, Westworld is a huge – and I mean, huge – adventure park for humans, Wild West style. It’s important to say “humans”, as all the people inside the park other than the human guests are robots. However, it’s difficult to distinguish these robots – called hosts – from the humans, simply as they look and behave as humans. But they have an artificial intelligence mind. You see why, given my interests in consciousness, altered states of mind, and technology, this set-up is highly interesting. In case that is not obvious, the hosts in the movie are played by humans, of course.

The humans, called guests, can embark on different adventures, or quests, which are story lines written and prepared by the content creators of the park, sort of like for a video game. As it seems to have been custom in the heydays of the wild west, most people are armed, including the guests and also many hosts. However, while the guests can shoot hosts, or otherwise harm them, the hosts can’t shoot the guests. Well, they can shoot at them, but the guests will not be injured by their “bullets”. Hence, the hosts can die, the guests cannot (unless they fall off a horse, or a cliff, and break their neck). Of course, the guests are aware of this asymmetry, and with some, it brings out the worst. They enjoy themselves in shooting or even torturing hosts – even though the hosts express fear and pain as any human would. They bleed, and get visibly injured. Their behaviour and appearance is indistinguishable from a human’s. The guests who inflict pain cannot know if the hosts actually feel the pain, they for sure express it. Tell a person that some other creature is worth less, and it may evoke the worst human traits. Think of torturers in general, or Nazi Germany, white supremacists, dictators. Or Trump. Or modern agriculture.

As it is often the case with interesting movies, the actual plot-line is not even that important. Consider Inception, which explores the phenomenon of dreaming, and dreaming within dreaming, and sharing dreams. The story: meh. But as heavy and vivid dreamer, I love that movie for its deeper aspects. Anyway, the central questions in Westworld – at least for me, and I talk about season one – are the boundary between humans and intelligent machines, a line that will only get finer and more indistinguishable going forward, how consciousness arises in the first place, and how, or if, we even can tell if another creature is conscious. In the movie, not even the creators and maintainers (more below) are completely sure about the level of the hosts' consciousness. As it is mentioned in a few scraps of dialogs, one of the original inventors clearly had the goal of creating conscious creatures, but no-one is sure at this point, not least as there are different generations of host technologies, and the later ones were created simpler to cut costs for the benefit of the park’s bottom line.

There are other technological aspects, too. The hosts, in order to be able to act and appear human, need a complete personality. Backstory, character traits, everything. It’s like building a false identity, but to a much deeper level, as there cannot be any holes or inconsistencies that the hosts can brush over if need be, using their life experience to improvise and divert the conversation to a different topic. And this takes time. Not just to get all details right, but to teach the hosts, to evolve them into what they are supposed to be. Think of our evolution both as species and as individuals, or the learning process of a neural net. Now, here’s the kicker. As the storylines change, in order to offer returning guests different experiences, the hosts need to be “re-purposed” from time to time, ie. given a new, different personality. The former sheriff is now a farmer. In order to save time and money, the thusly re-purposed hosts don’t get reset and “erased” completely, but keep their deeper levels, and only learn the more superficial new skills and traits. So, in an unforeseen manner, they accumulate memories. You can see how this is the basis for interesting developments in the movie: hosts remembering their former lives, if you will.

This is not supposed to happen. Even from day-to-day, or after a quest, the hosts are reset, and start their day completely anew, repeating their storyline, same dialogs, same actions. While it seems easy to delete these daily memories, longer term ones are not. As with humans, we might have forgotten where the keys are, but not who we are (any major incident notwithstanding). So, each night or so, the hosts are brought back to the lab for resetting, or for physical repairs as needed. Remember, they might have been shot or harmed by a guest. They maybe get a software upgrade, or some other maintenance. Basically, they die each night, and reincarnate on the next day to act their storyline, not remembering what happened the day before, even being friendly to the guest that shot them. It’s somewhat uncanny.

The conceptual creators of the park, ie. not the story writers, but the few ones responsible for the underlying technology, will interview some of the more interesting and important hosts at night, in order to collect experience and discover issues and vectors for improvements and enhancements. These dialogs are among the most interesting parts of the movie. The hosts have some analysis mode of operation, which allows them introspection into their own minds from a meta-level. Here, and in discussions among the conceptual people, we learn about the attempts to evoke consciousness and other aspects of the concepts and their implementation. However, these are short snippets of conversations, and they are easy to miss.

The story of the series develops along several plot-lines, which happen, or have happened, at different times. At first, this is not easy to discover, simply as the hosts appearing in different lines look exactly the same, while the humans at different times of course are of very different age. The hosts don’t age, obviously. They are age-less, and basically immortal, as they can be repaired and brought to life again and again. Think of it: age-less and immortal, the dream of many humans since the dawn of time (not mine, though). The hosts are the more advanced beings in this respect.

It’s a mind-blowing, thought evoking series. I talk about season one. There is violence, but mostly for making a point, to reveal the ruthlessness of the human guests, or to elaborate on the factual immortality of the hosts. In season two, there’s only violence, at least that’s my impression as of now. The subtle approach of season one has given way to brutal action-movie type scenarios. The hosts could as well be humans now, if we didn’t know them from season one, there would be little evidence that they are not. Yes, I get that this might be one of the purposes, this is, to show that the more beings get human, the more violent they become. But I doubt it. Maybe the last episode, which I will watch tonight, will resolve this. Up to now, I experienced a run-of-the-mill action movie with bad and shallow dialogs.

Adding to this impression is the technology. While in season one the technicians had some sophisticated, foldable tablets to access and reprogram the hosts' minds wirelessly, they now need to push some probe under skin of their arms, connected to the tablet via a cable. Really? A probe stuck into a cut in the arm? I get that wireless connections are potentially limited compared to cabled ones, but a probe just somewhere into the forearm? Does not even make sense. But fits the mediocre action movie stereotype. No, there’s no connector plug or the like in the arm, in case you wonder.

Or the technology of the mind itself. In season one, it was blissfully left open what’s actually in the heads of the hosts. As said, the minds could be read and changed wirelessly. Now, the hosts have some lightbulb-shaped “core” in their heads, which can be extracted. Again, really? And to read the mind in there, this lightbulb-thingie needs to be plugged into a socket on the tablets. Yes, exactly. Whatever the “wet-ware” of an advanced artificial mind will look like, it’s highly unlikely this will be it. But again, it offers the possibility for some gruesome scenes, as you can easily imagine.

At times, the “technology” verges on magic, becomes implausible. In one scene, a thusly programmed girl puts her hand on a glass wall, which makes all the hosts inside, which are either off-line or dead, rise and beat each other up. It’s just silly. Season one’s technology was plausible, in particular as its innards were not revealed, which was for the benefit of the movie. To know more was simply not needed. Season two’s technology is gross and crude, or implausible. And to see and know these “details” does not help the plot in any way.

To come to a conclusion, I really loved season one. It explores what’s being a human, human behaviour if free from social observation and restrictions, the meaning of consciousness and memories, a possible future society consisting of humans and human-like robots, and if the robots maybe will be the better humans, free of evolutionary baggage. If they don’t get too human, that is.