The other day, I bumped into this article by The Atlantic, with an interesting take on theories. Namely, that these days, conspiracies don’t even need any whatsoever weird theory anymore to support them. Just feeding the rage and emotions of your audience is sufficient. Social media rock.

A theory explains, not just describes, a phenomenon, and makes predictions which can be tested against reality, all within a defined framework of pre-conditions and assumptions.

Hence, in the Old Days, the nut-jobs behind the “faked moon landing”, or “9/11 was orchestrated by the US government”, or “the earth is flat”, at least invested some effort into explaining what was, or is, going on.

As the article puts it:

Conspiracy theory of the sort Richard Hofstadter associated with the paranoid style in American politics has always been with us. Sometimes far-fetched, sometimes accurate, and sometimes a vexing mix of the two, classic conspiracy theory tries to peel away deceptive masks to show how the world really works. It demands a cause proportionate to the dire effect. So-called truthers say that the U.S. government must have been involved in or forewarned of the plan to attack the World Trade Center and the Pentagon in 2001; the terrorist attack could not have been the work of 19 men plotting in a remote corner of Afghanistan. To look at a website such as Architects & Engineers for 9/11 Truth is to encounter putative facts, inferences, and conjectures that mimic the methods of scientific research. Insisting that the truth is not on the surface, conspiracy theorists engage in a sort of detective work. Once all the facts – especially facts omitted from official reports – are scrupulously amassed, a pattern of clandestine machination emerges.

The term theory is used loosely anyway in most peoples' everyday language. Many understand it as simply a hunch, a conjecture, an idea. Or worst, a belief. In science, theories are the foundation of acquiring, building, and discarding knowledge. What is important here is that each theory is considered wrong as a default attitude, ie. to start with (null hypothesis). Only testing its predictions against reality makes a theory more plausible – never true, as it’s impossible to prove that a theory is correct. One can only prove that a theory is wrong. This is called falsification, and each serious theory must define tests that would show that it’s wrong. Without possible falsification, it’s not a theory.1

Hence science, and its theories, is an endeavour of sceptics. No theory can, and should, ever be considered correct. It might explain a phenomenon best at the current state of knowledge and experience, but it’s always open to falsification, or extension, or improvement. A canonical – ie. boring, but illustrative – example would be the Newtonian theory of gravity (or mechanics in general), which was supported by all evidence for centuries, later superseded2 by Einstein’s relativity theory with its with more accurate explanations and predictions.

All this makes science and theories so difficult to explain to some who seek the “absolute truth”. We will never get such thing. We cannot prove that the current climate change is created and fuelled by humans, but all the evidence supports that theory. That’s not a weakness of that specific theory, but the inherent nature of the scientific process, which is the best way of building and curating knowledge. At least as of now. :)

Ask a scientist, “did a god create our universe?", and he, or she, will say, “given the evidence, this is highly unlikely, and we have simpler explanations3 that don’t require supernatural beings or forces,4 but we cannot rule it out completely”. Simply as nothing about nature can be proven to be correct, just explained and supported by evidence, and even that not for all times. But given the current theories and all the supporting evidence, the Bayesian credence of a god-created universe is very, very close to zero. As honest Bayesian however, you cannot set said credence to zero – hence “we cannot rule it out completely”.

But you see the potential for “interesting” discussions between a scientist and a believer in dogmas, especially on TV, where only soundbites matter – the dogmatic will always “win” against the scientist in most viewers' eyes with hard-nosed language lacking any doubts, reflection, and introspection.

It’s important to note that evidence is not just tests, measurements and observations in a lab, but all the practical applications. Without general relativity theory, no GPS.

Speaking of theories and predictions, we very recently got a visual confirmation of one of Einstein’s predictions. About 100 years ago, simply following his equations, Mr E predicted the existence of black holes.5 That’s the predictive power of a theory. No predictions, no theory. 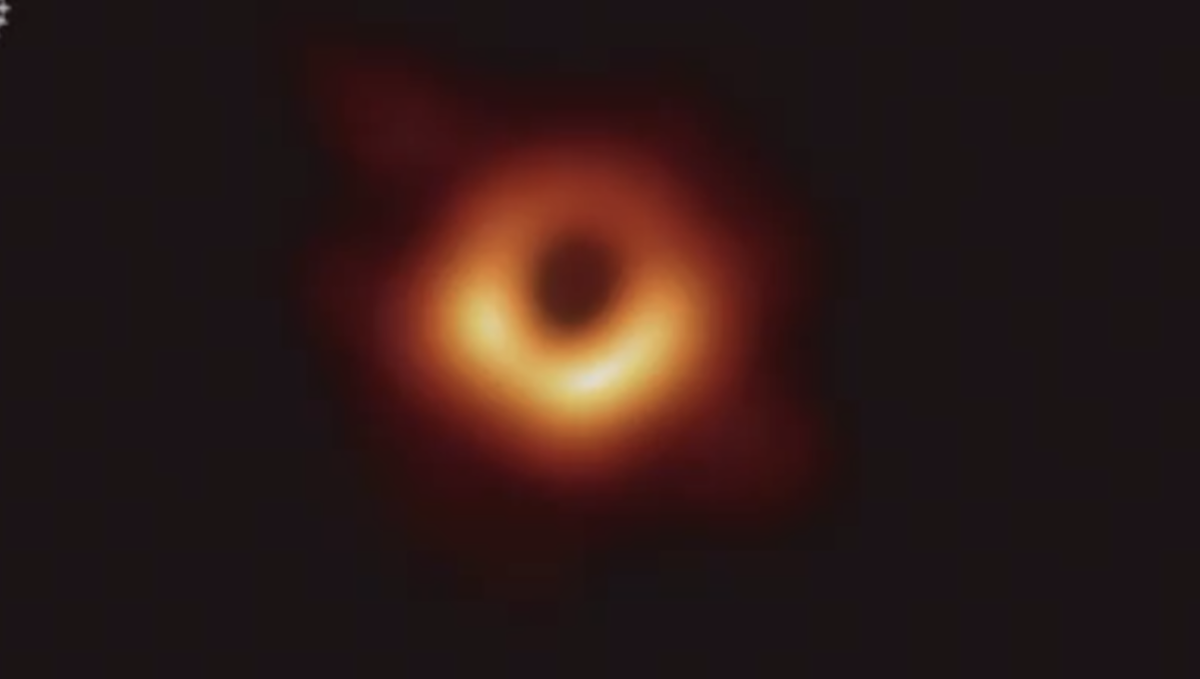 Of course we cannot see the black hole proper, as no light escapes from it, but the Hawking radiation around its event horizon (as I understand it). It took the light 55 million years to arrive here. Hence is emanated from the black hole a short – in cosmological time dimensions at least – time after the dinosaurs went extinct.

Update: Nope. I was talking out of my butt. If you want to understand what a picture of a black hole actually shows, check out this video: How to Understand the Image of a Black Hole. It’s much more exciting, in fact, as we can see stuff that is behind the black hole. Black holes are cool. Mind bending, apart from light bending.