A few pictures from last week’s sterilisation day for dogs and cats, up in Vacoas on the Central Plateau. 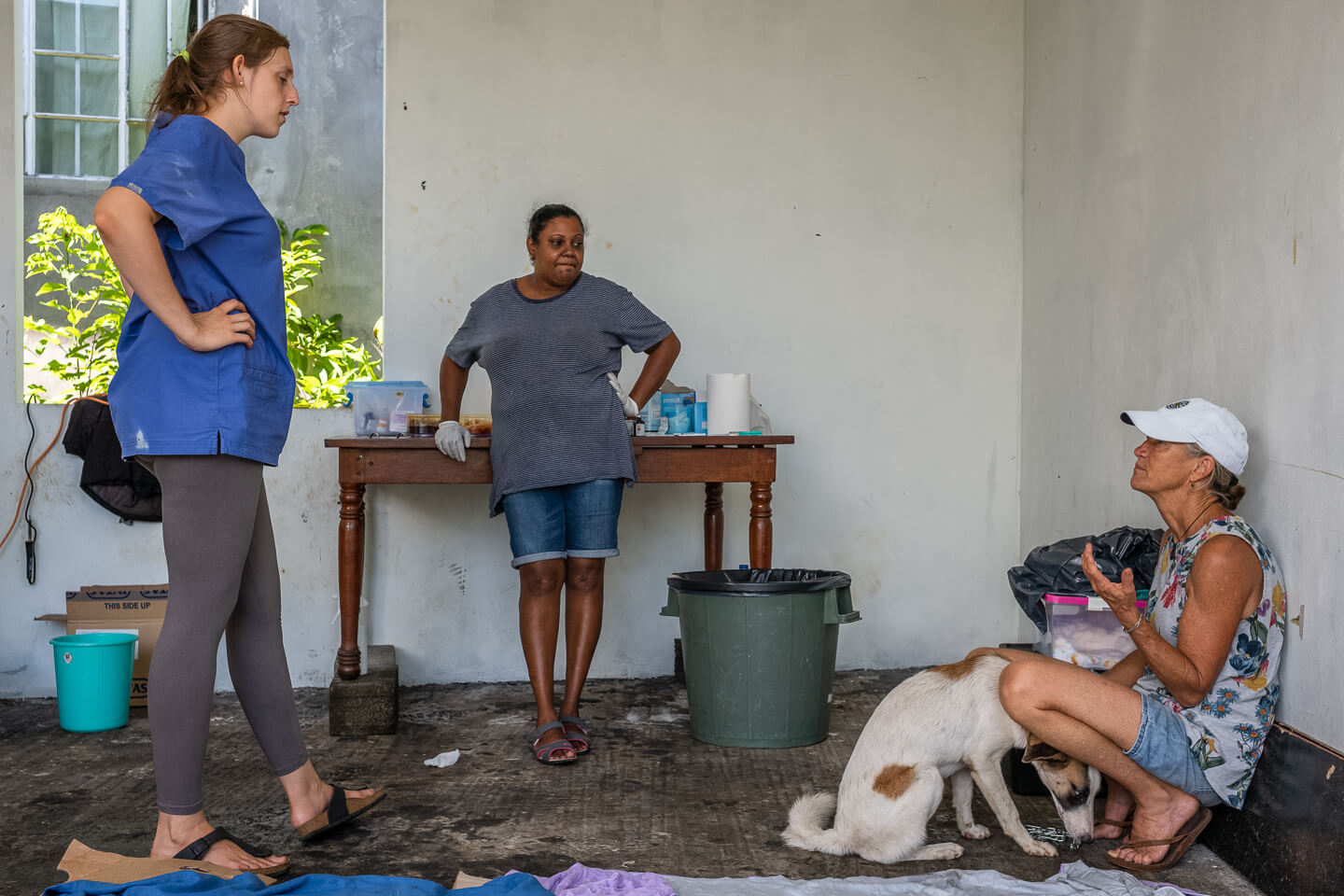 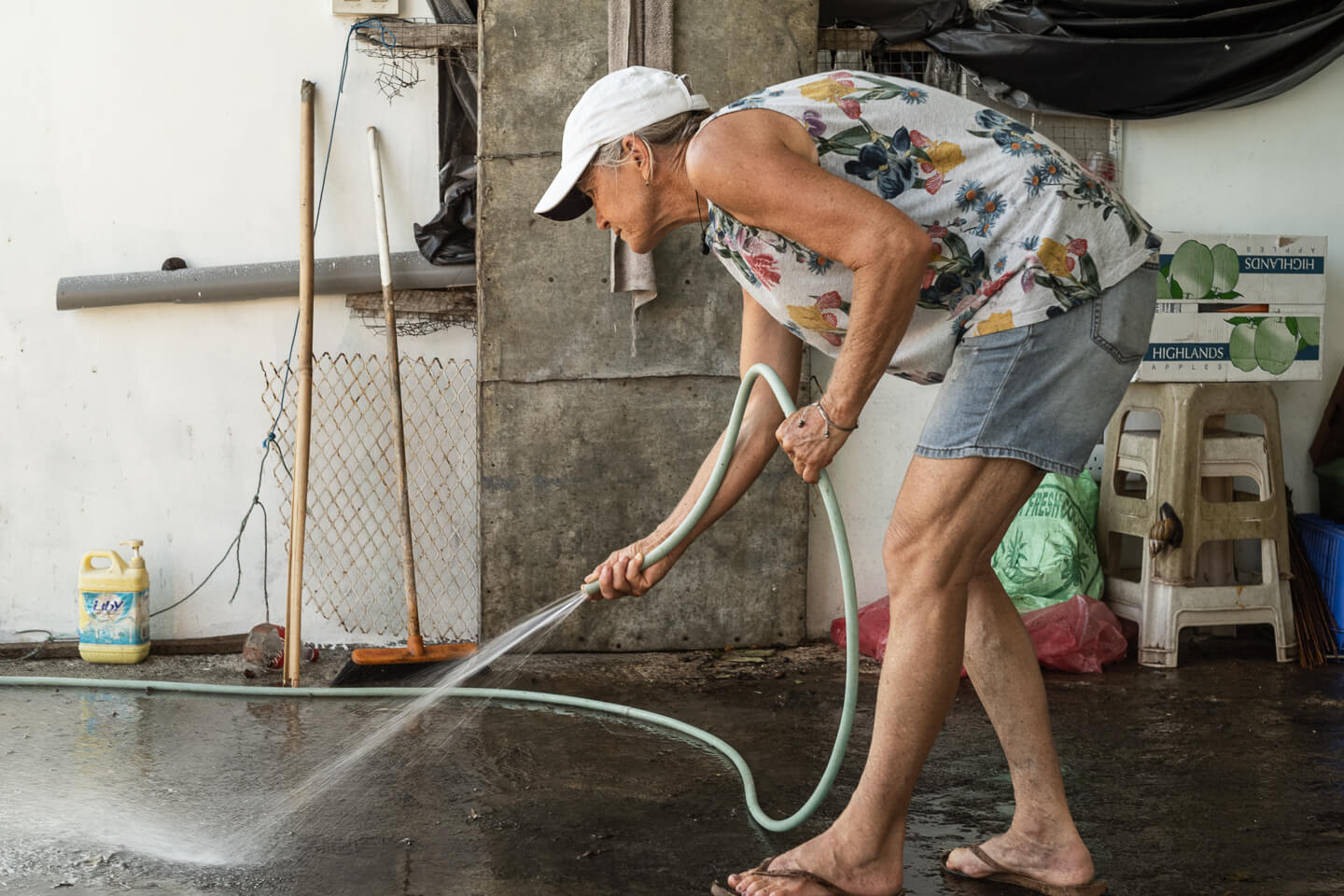 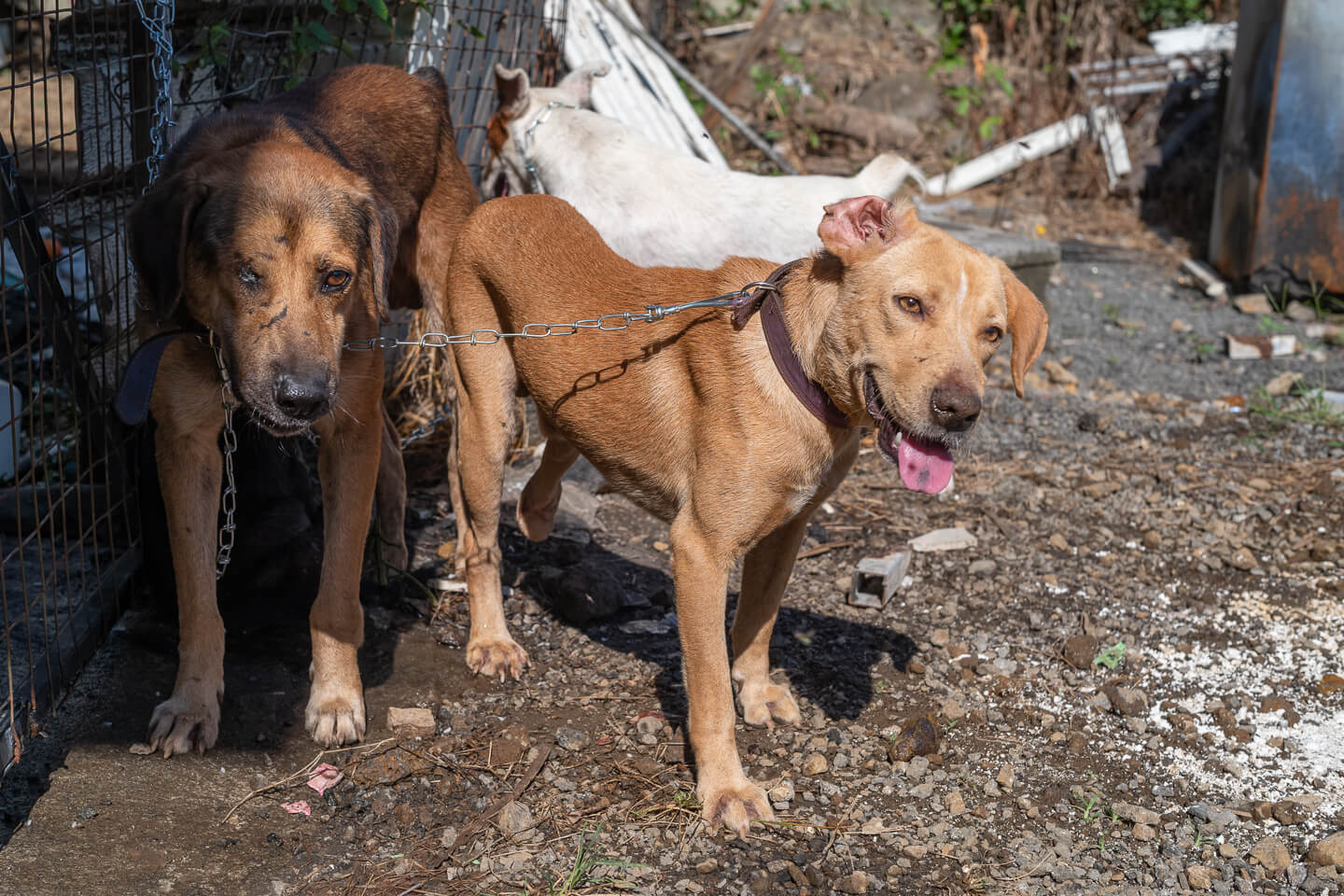 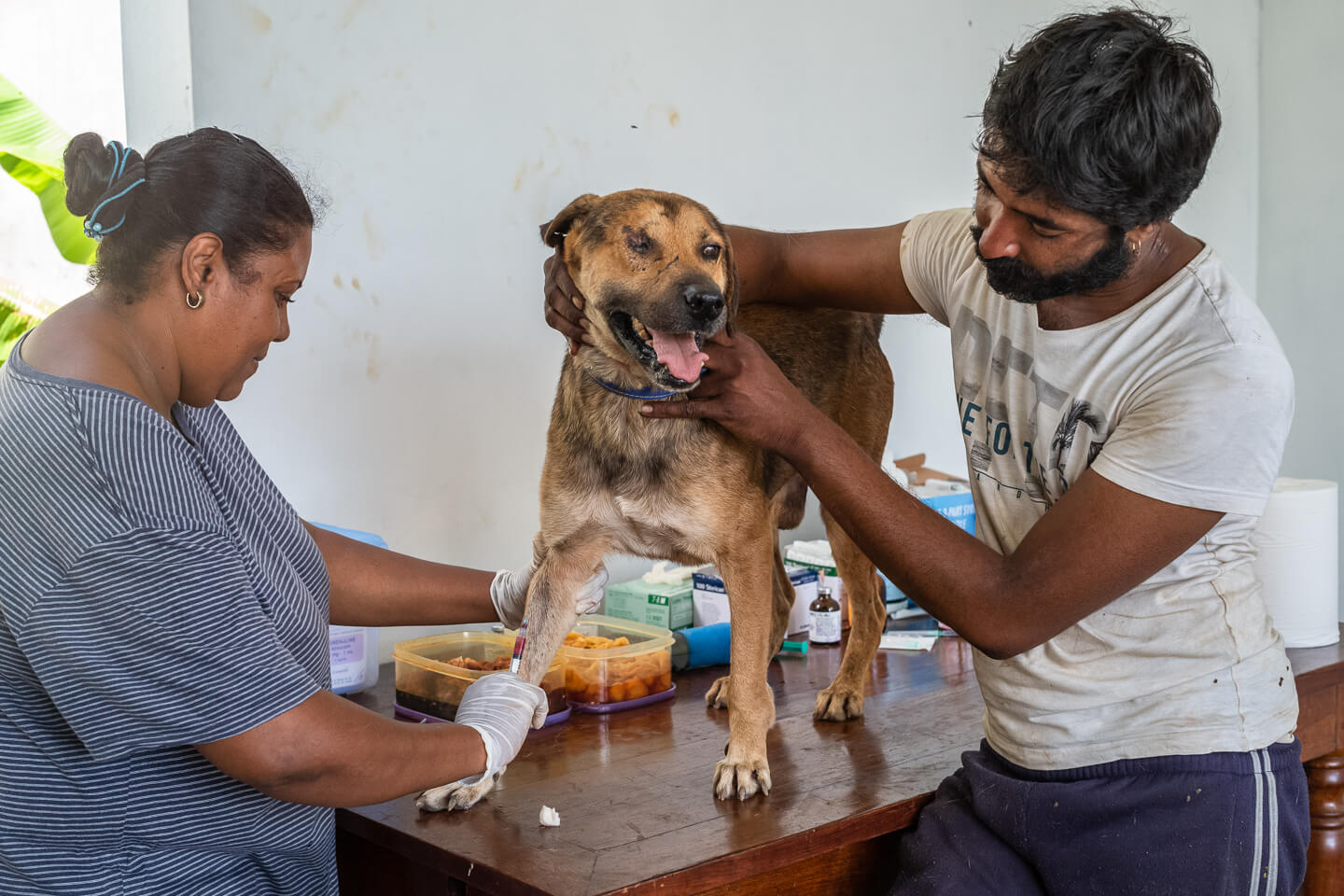 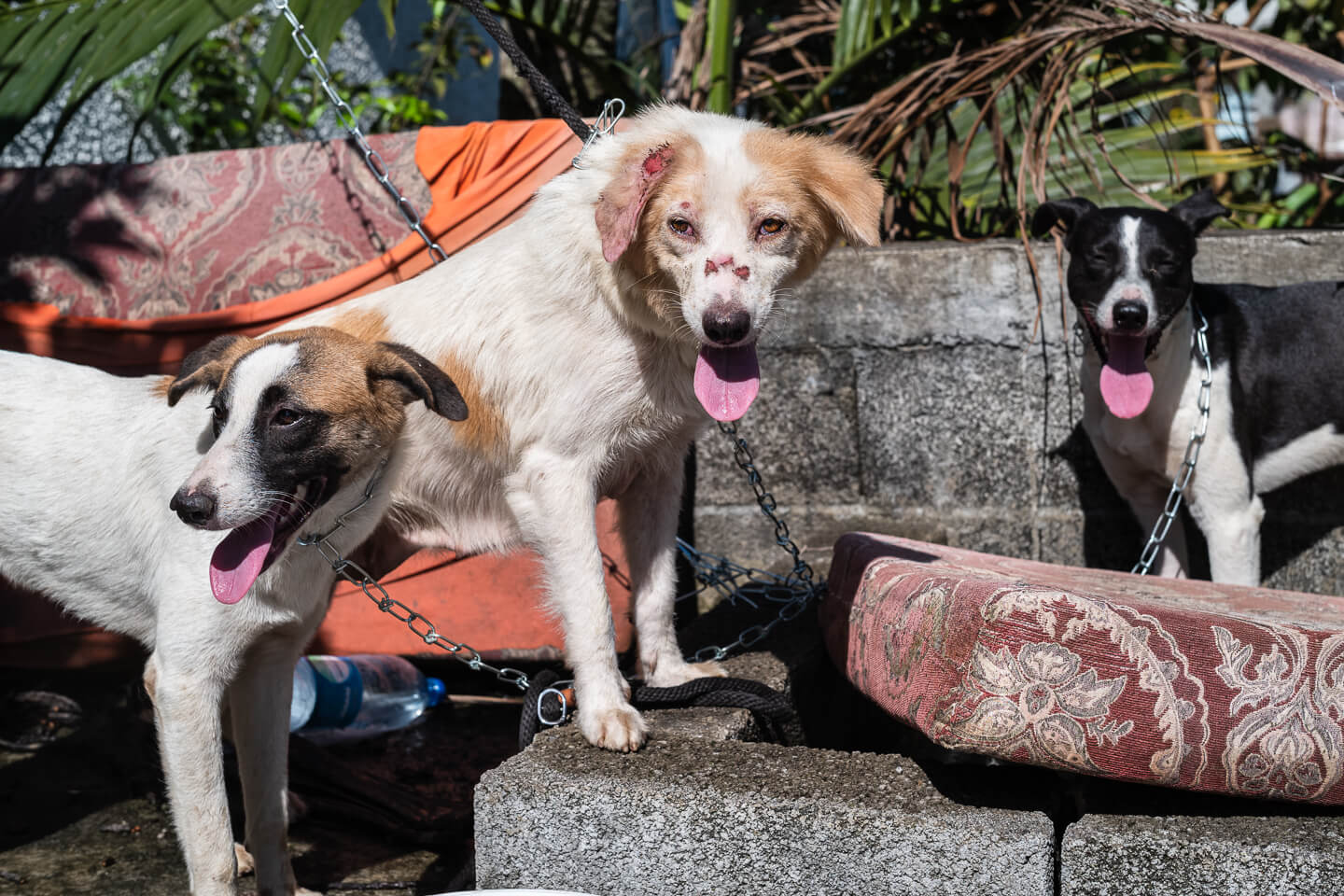 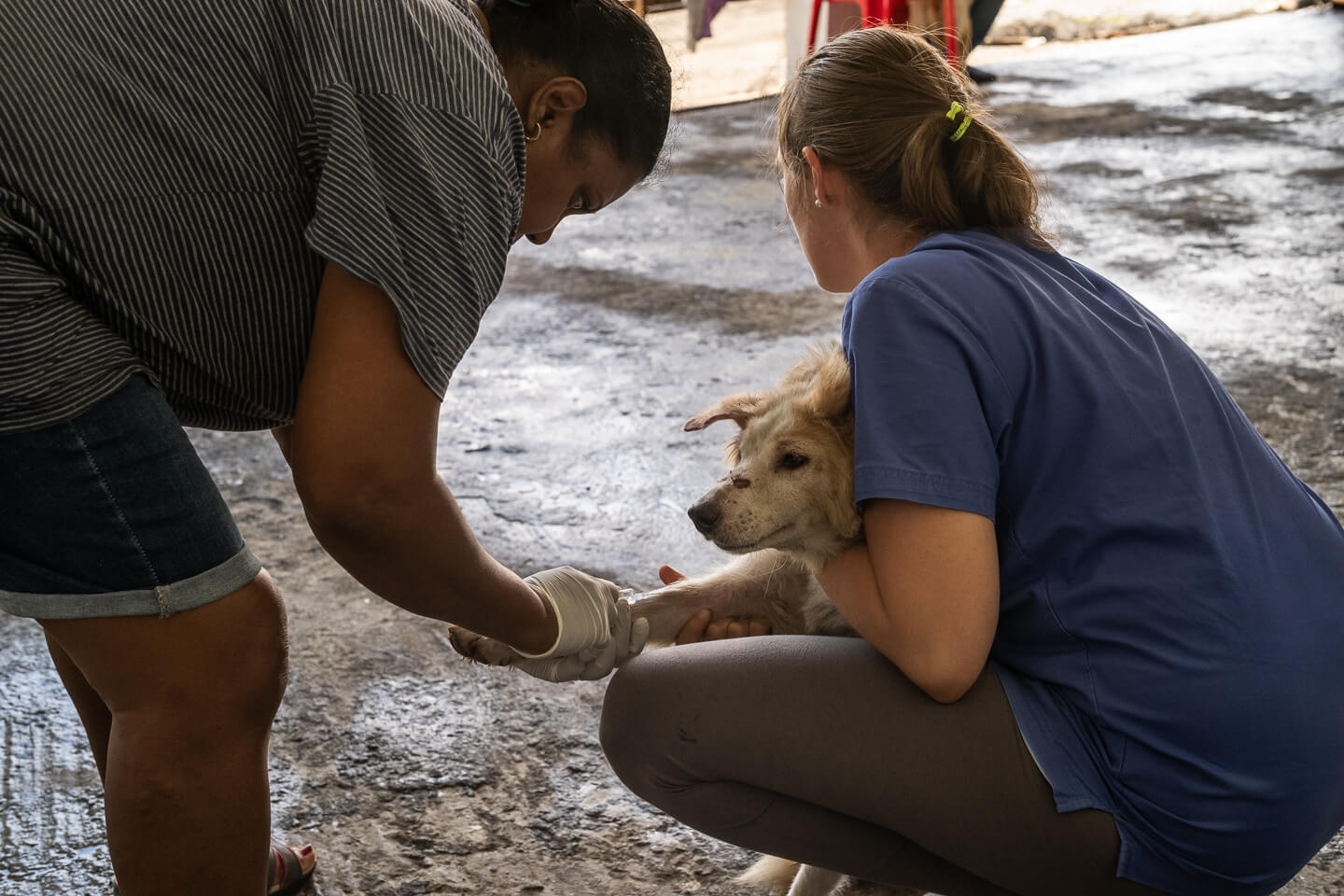 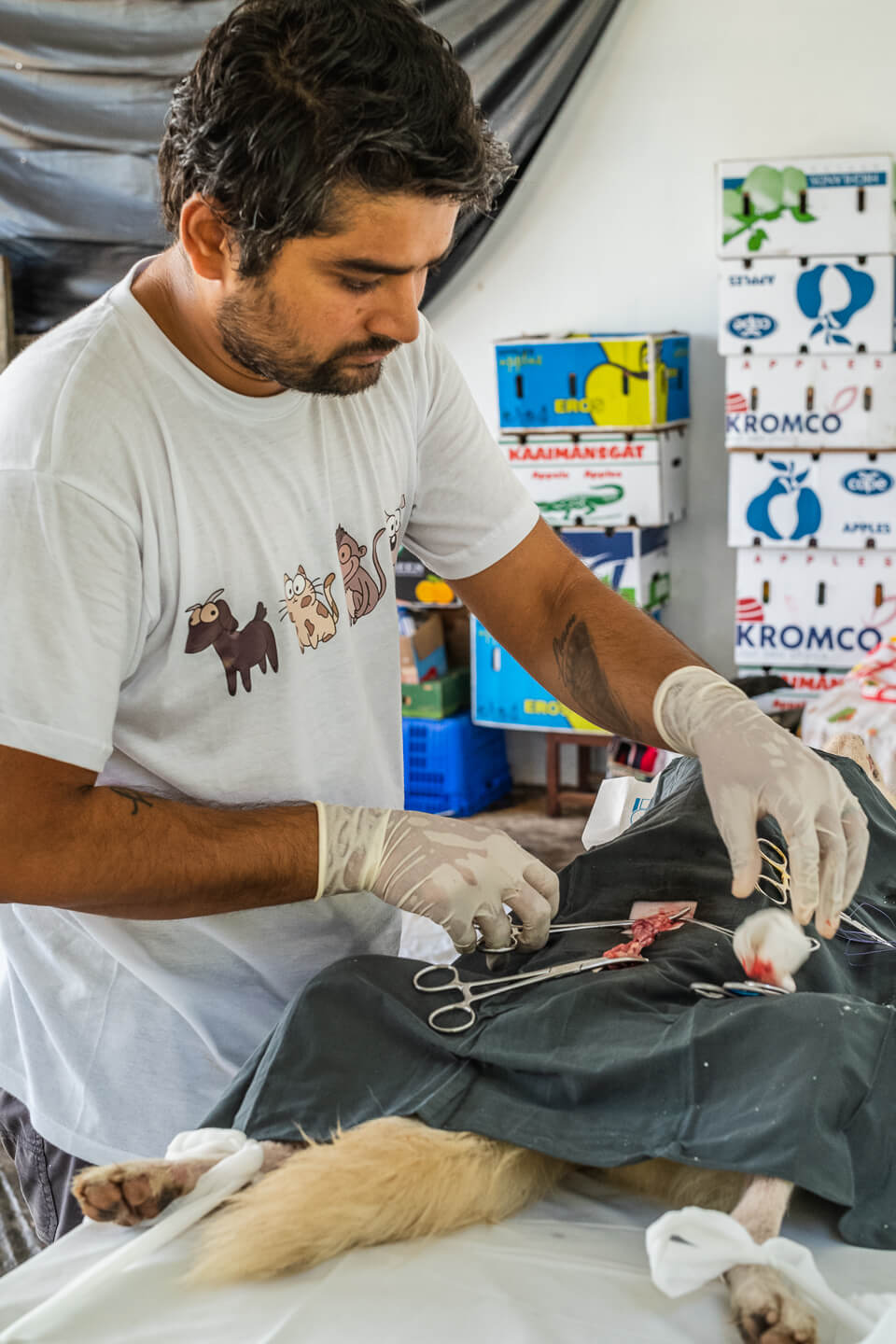 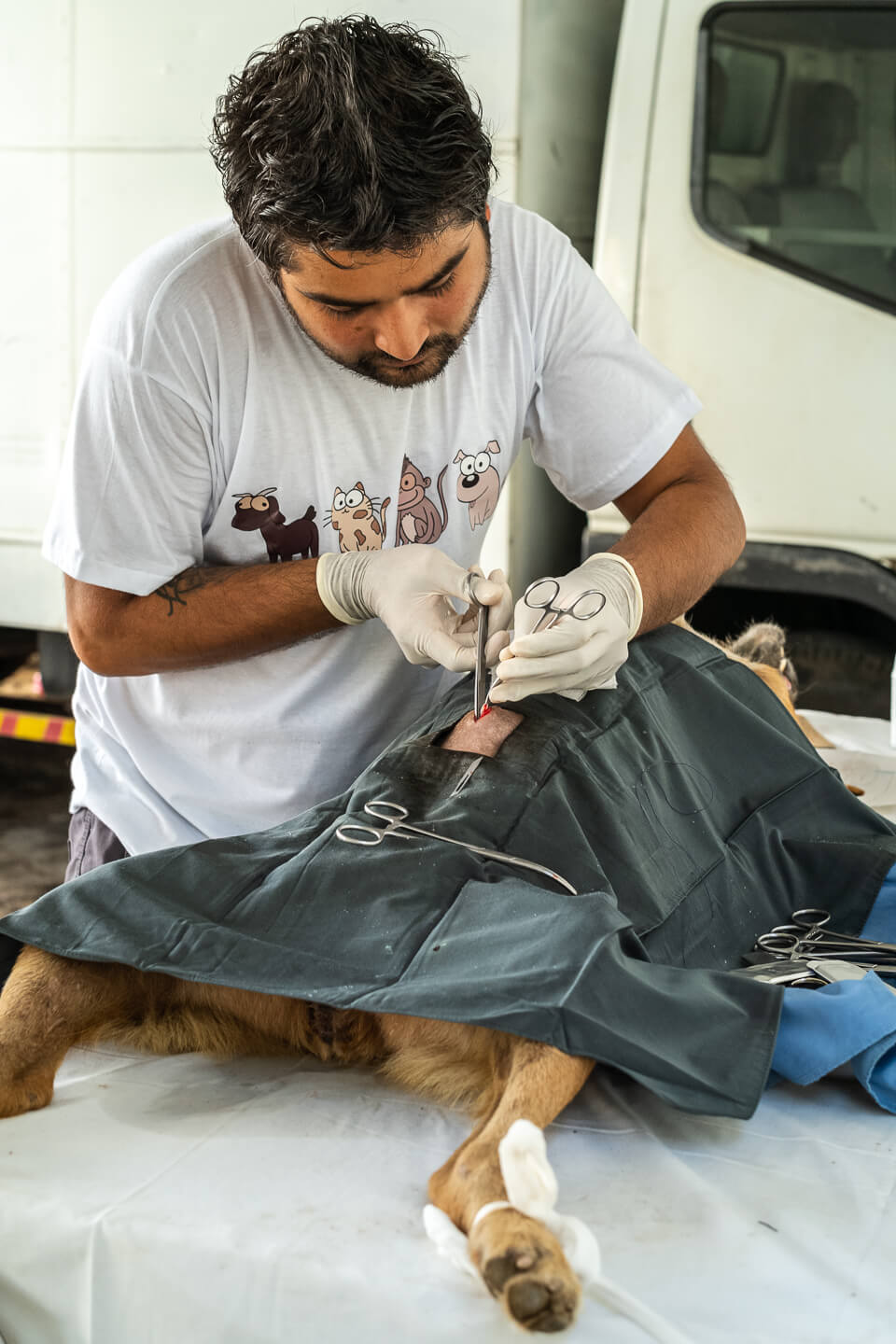 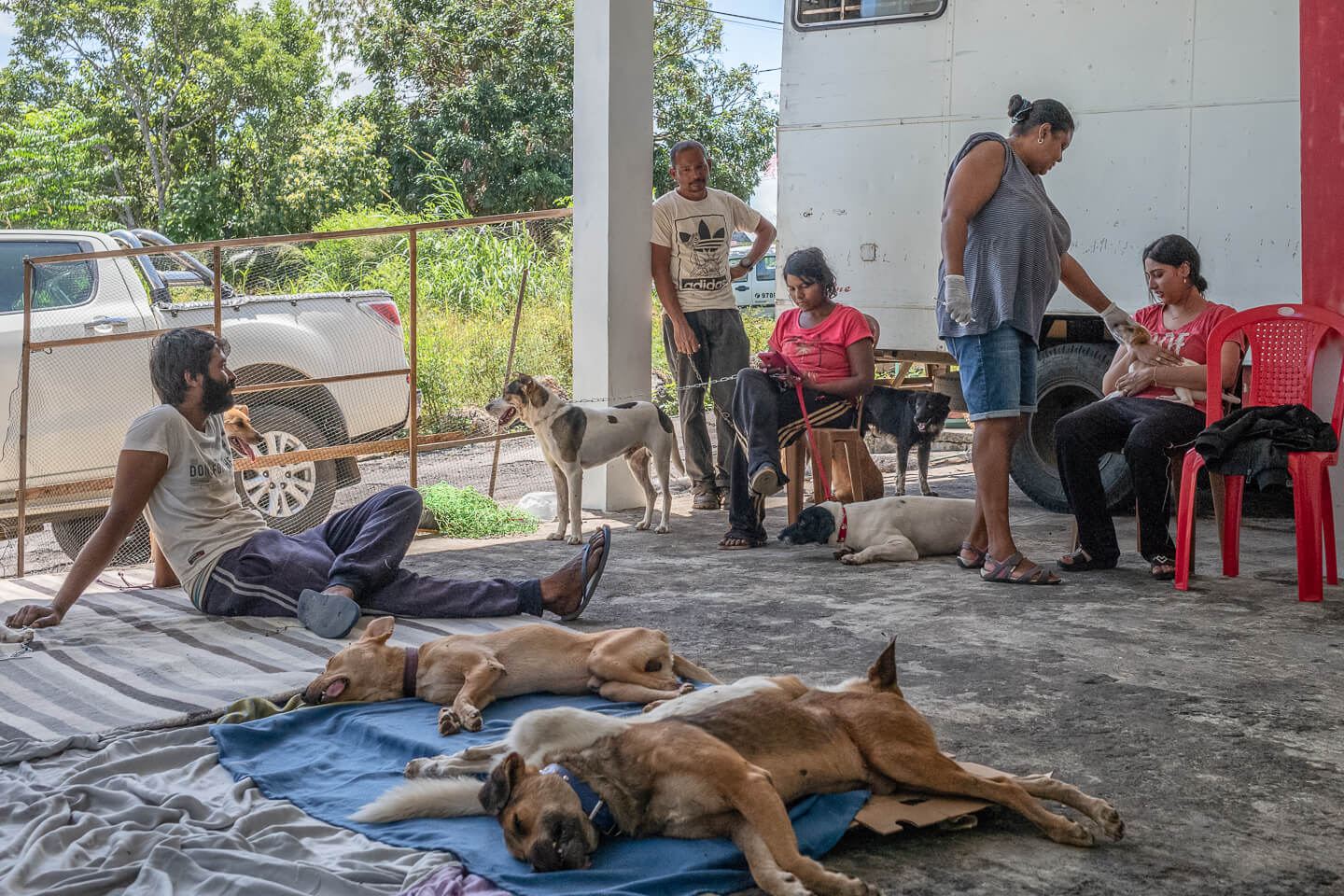 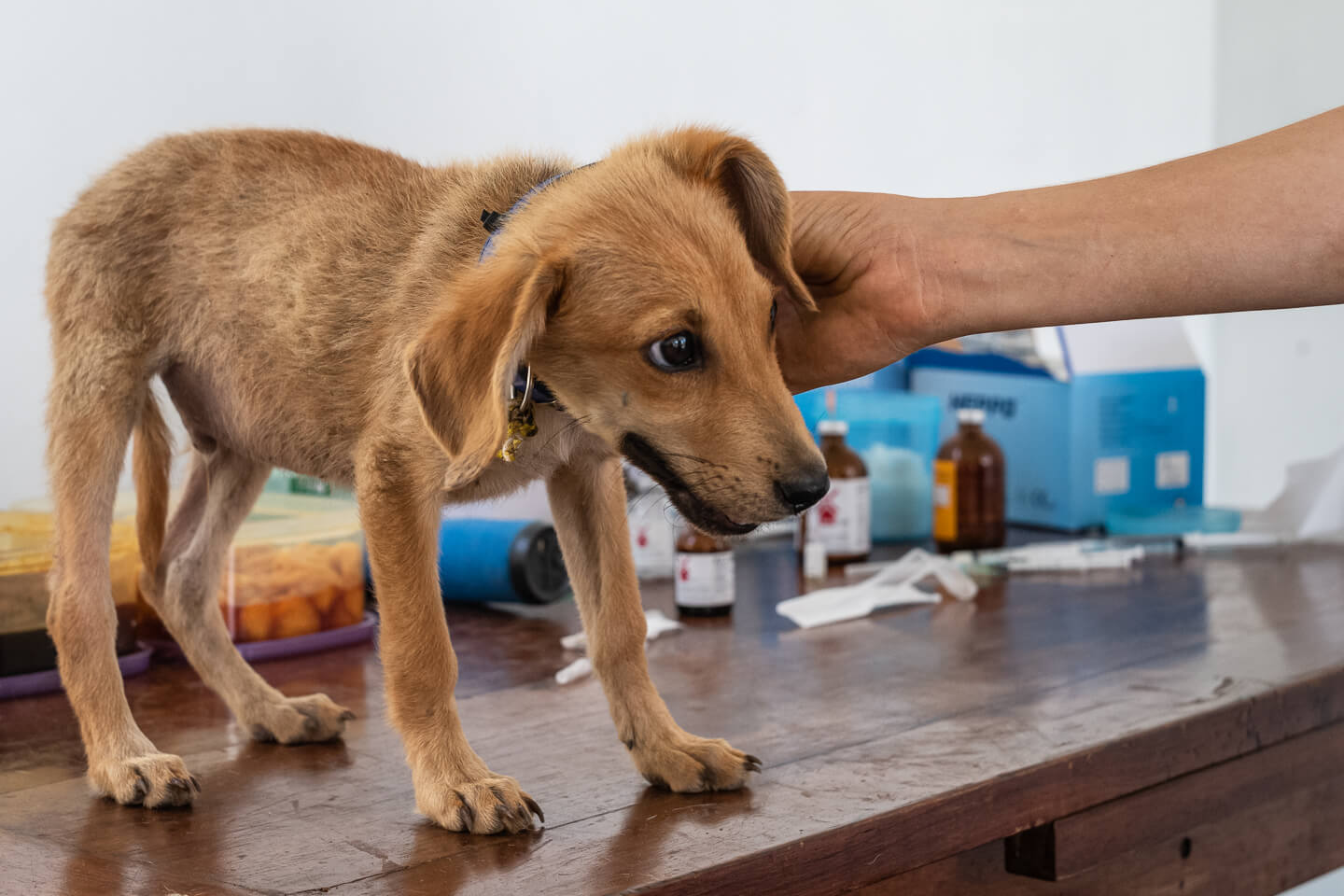 As you see, the place is a makeshift treatment room, actually in an empty garage. Had you asked me five years ago if it’s safe to do surgery on an animal in such an environment, I would have been highly doubtful. In the meantime I have learned that what really matters is the basic set-up and the process. I have photographed dozens of sterilisation days, with literally hundreds of sterilisations, and I have experienced this to be true.

It’s actually not even that complicated. For starters, clearly separate the preparation area from the surgery table. Then, do a proper preparation by shaving a large enough area of fur, and clean and disinfect this field of operation. On the surgery table, be meticulous and strict, from using a sterilised cloth around the incision to changing the gloves for each animal. Never touch anything outside the field of operation. And so on. The rate of complications is close to zero this way. Back in the day, I once watched a sub-par veterinarian, and I knew immediately that the operated animals would have big problems. And they had. Lots of infections that required a second operation one or two days later. No, not by the same doc. And we never cooperated with this vet again, of course.1

Talking about vets, the guy you see on the photographs is a master. As said, I have seen hundreds of sterilisations, and experienced many very good veterinarians. But this one… an artist. Working calmly, making only very – and I mean very – small incisions and thus wounds to close by sutures. He works like in trance, is not distracted by anyone, or anything, and gets 40 or so animals done per day. That’s a lot, in case you wonder. Very impressive, to say the least.

For some time we had been talking about having a bus in lieu of the makeshift treatment and operation rooms. So instead of having the animal owners come to us, we go to them. “Bring the venue to the people”, if you will. The bus could be permanently equipped and prepared, with proper height-adjustable surgery tables, air-conditioning, and so on. In our experience of the past years, the transportation of the animals has always been a major headache. You see, not everyone here has a car. And people work.

My friend Corinna, the driving force behind the sterilisation efforts, had been pestering the chief veterinarian of the island for years to get his support for this bus project, and he finally – maybe being tired of the pestering – said he wants to see a project proposal. Within two days, for some meeting he had with higher ups. Maybe he just suspected that we wouldn’t be able to get this together in this short time. Little did he know about our abilities in this respect… slapping together a document has never be a problem for me. Anyway, bottom line, he came around and said OK, try to make it happen, let’s see how far you get. To be fair, I get the impression that in the meantime he has grown pretty fond of the endeavour.

So that’s where we’re at now, namely setting up a proper project, talking to people to find volunteering team members and, equally important, to find companies and people to sponsor purchasing and equipping the bus. We will also need a proper organisation for the operation of the bus after the project, and in particular the funding thereof. Companies are not in the habit of giving larger amounts of sponsor money to us ragtag band of volunteers. Also Mauritius has laws about accounting and taxes…