For the record, as of this writing, we’re at close to 1.8 million reported Covid-19 cases globally, as reported by Johns Hopkins.

Last Friday, the government of Mauritius has decided, and announced, that the strict lockdown is being extended to 4 May. We can go out for shopping groceries and visit pharmacies twice a week, under the same strict regime.

As of this morning, we have 319 reported cases, of which 28 have recovered. 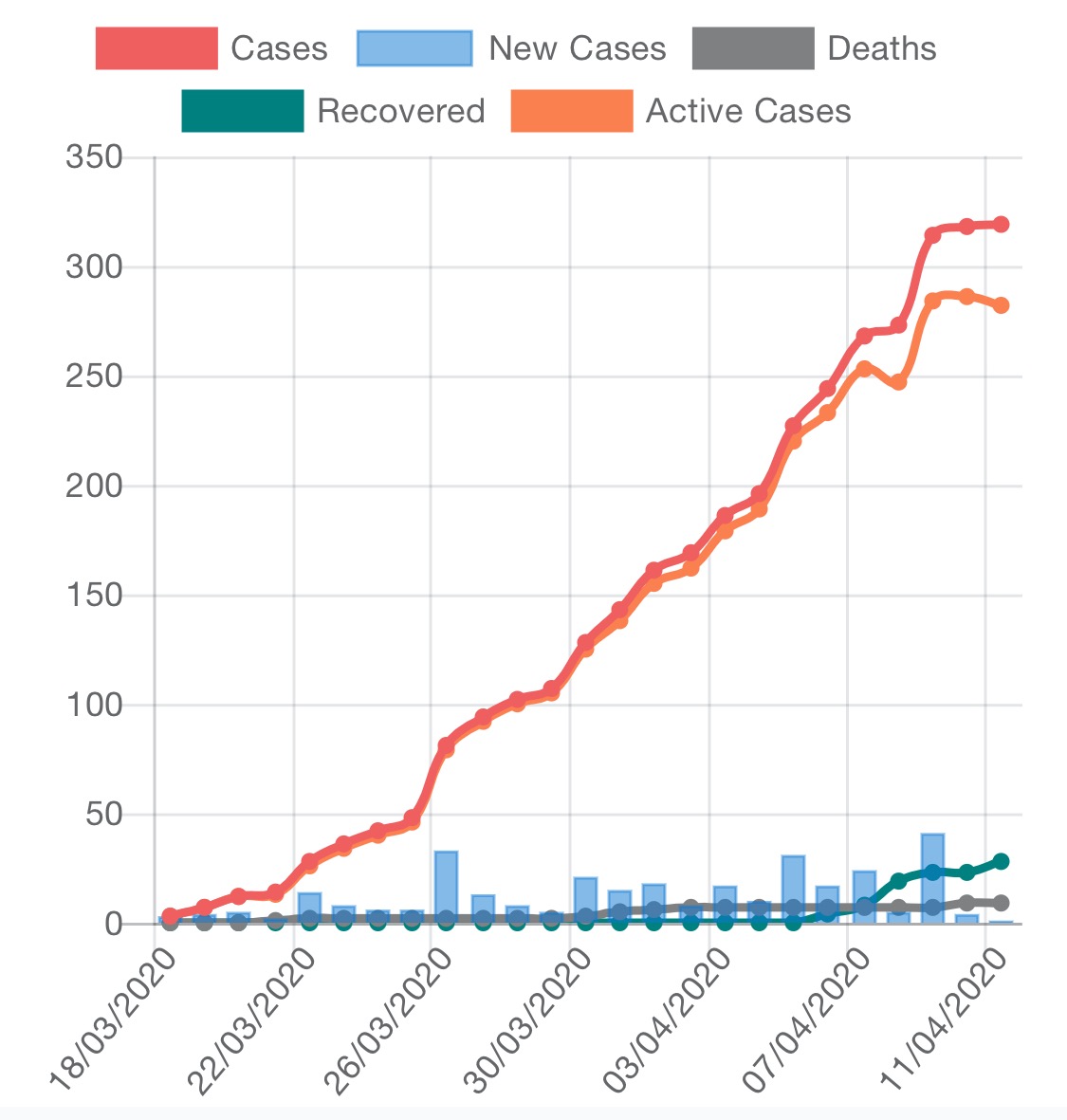 This graphic is a screenshot from our local, specific smartphone app that serves to inform everyone about the latest updates, including rules about the curfews, shopping hours, and so on.

The latest government update of last night also reports that 7,700 tests have been performed up to now. That’s about one test per 162 heads of the total population. Not a leading number compared globally, but not bad either. Furthermore, the number of people in strict quarantine has gone down significantly, from close to 2,000 to just over 400. The initial number resulted from putting every arrival to the island into quarantine, resident or not, just before the borders were closed for good. In the meantime, everyone testing negative after three weeks (I think) has been released.

Interestingly, for a tiny “developing” country, Mauritius is engaging in blood plasma treatment for patients severely impacted by Covid-19. I have asked my friend Corinna about it, who is a pharmacists. In her opinion the whole procedure is not highly scalable, as it’s labour, time, and infrastructure intensive – from selecting sufficiently recovered patients to anti-body counting to drawing the blood to separating the serum to infusion. But it could be viable as long as we only have a low number of severely sick people. It’s probably the best, or at least the most promising, treatment we have for now.

Winter is coming,™ so to complement all other preventive measures, the government is offering free anti-influenza vaccination to the elder population and other risk groups.

The Mauritius Research and Innovation Council (MRIC) has launched a special call for proposals for innovative projects to counter the impacts of Covid-19. Selected projects will be fast-tracked and receive a grant.

To this effect, the MRIC has earmarked funds to encourage entrepreneurs, academics, researchers, enterprises and start-ups to implement short and medium term projects that can contribute to improving and accelerating Government’s response to the challenges of the pandemic.

Obviously, this could also help to establish promising companies in the longer run. Good move.

By the end of March, the government had put in place a financial support scheme to ensure the payment of the March salaries to all employees, in order to motivate companies to keep them on the payroll, given that all work had to be suspended due to the lockdown. Now, an extension of this scheme is being elaborated.

Our Charity Centre was not eligible for this support in March, so we hope this will change in our favour with the extended plan. We think our services as well as our funding might be even more important in the months ahead.