For the record, we’re at 1.1 million reported Covid-19 cases globally as of this morning, with the USA contributing about one quarter. A week ago, on 27 March, it was half a million globally. The USA went from 15,000 cases to over 270,000 in only two weeks. Solid lead there, congrats, you oh-so-advanced, “developed” country.

After more than a week of strict lockdown, we could go shopping this week, under very strict conditions. The population was divided into three groups of roughly equal size, and each group could go out on a specific day. The plan is to keep that regime in the weeks to come, with each group getting two shopping days per week. The government reserves the right to clamp down again in case there are lots of rule violations, or the case numbers start to climb unexpectedly.

As you can easily imagine, after ten days of strict lockdown, there was big pent-up demand during these first shopping days – it was madness. Long queues everywhere. I hope this will calm down next week, as people have now stocked up again.

To enter a shop, we’re obliged to wear a mask. As medical masks are out of stock everywhere, at least here around Tamarin, people are using all kinds of makeshift masks. It would make for an interesting photo series to shoot all these portraits. Maybe I’ll carry my camera with me next week, or use the iPhone, to take a few pictures.

Note that the mask is not primarily mandated to protect yourself, but to protect others. Everyone knows by now that anything but an N95 mask does not really protect people. But simply covering your mouth will protect others. I just heard Dr Fauci say in an interview with PBS Newshour that the latest research shows that SARS-CoV-2 can be transmitted simply by speaking, ie. without even coughing and sneezing. So, good call. Which we now also see in other countries all over the world.

The State of Things

As of yesterday, we have 186 reported cases here on the island, with seven fatalities. 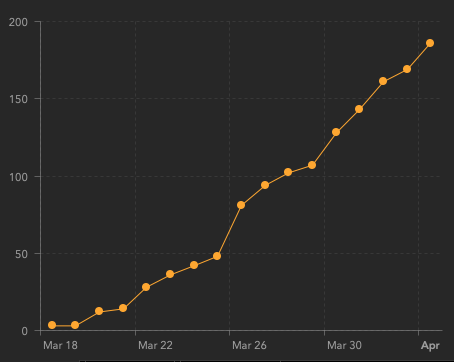 As you see, we’re still on a pretty linear curve. Compare to, for example, the UK, which clearly shows exponential growth: 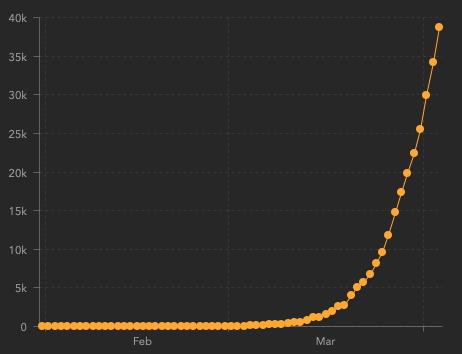 But note the different time scale (x-axis), as well as the way smaller number of cases in Mauritius. As mentioned before, we might well be in the quasi linear part of the curve before a massive ramp-up. The next weeks will tell more, in particular now with the re-opening for shopping. Due to the strict measures taken, we might just be able to avoid the worst. Fingers crossed.

As mentioned in the government’s latest news,1,2 widespread infections among our island population would be devastating.

He urged the population to ponder over their priorities by considering that an explosion of the pandemic on our territory will result in a devastating blow to the economy with the imminent threat of an over-burdened healthcare.

Up to now, I have been pretty impressed how they are handling the pandemic threat. There seem to be people who know their shit. As far as I can see, our government is partly following the South Korean approach, especially as regards tracing contacts of infected people and testing them, and putting suspected cases under strict quarantine: we have 186 cases, but 1,661 people are in quarantine, with 398 already released. And that’s real quarantine in one of the quarantine centres on the island, not just staying at home under lockdown.

A total of 3,155 tests have been performed as of today, that’s about 2,600 tests per one million people, which is not stellar, but not bad either. Most tests were done on people identified by contact tracing. There’s no general, public testing going on as of now, such as the drive-through testing available in South Korea.

Our strict lockdown has been extended to 15 April 2020. Hopefully the shopping exceptions remain in force. Don’t fuck this up, compatriots.