The other week, my Windows PC wouldn’t start. The 2-digit 7-segment display on the motherboard said 00, zero zero. I don’t know about off-the-shelf PCs from HP or Dell, but the motherboards for building your own PC1 go through a procedure called Power Up Self Test, POST. They have this little display to show the self-test in progress, and will stop to show the failing self-test number if anything goes wrong – RAM, SSD, and so on. POST code 00 means the self-tests didn’t even start, usually due to a missing or defective CPU, or a bust motherboard. It’s bad.

I removed and reseated the memory, the SSD, the GPU card, and even the CPU, as well as all cable plugs, to make sure the problem wasn’t not caused by oxidation on a contact. We have salty air here. To no avail. Not even the potentially self-harming incantation of the secret engineer’s spells helped.

So I knew I was in big trouble. Swearing calmly through my teeth. It’s a good exercise, staying calm and still letting off some steam. Cool steam, I guess.

PC parts such as motherboards and CPUs are not exactly available at the nearest computer shop, neither here on the island nor elsewhere. Usually, you buy on-line. Not even a specialised shop could keep a well-sorted stock of motherboards, as there are so many different types available. Either for Intel or AMD CPUs. For each CPU type with different generations of supporting chipsets. And for each CPU type and chipset in different versions for different feature sets (network, audio, and so on). All this times half a dozen or so motherboard manufacturers. Hence – online shopping.

Consequently, I didn’t have big hopes to find any suitable replacement parts in stock. Le sigh. A few weeks of delivery time also without the then still on-going lockdown, which restricts incoming planes and thus shipments. I had purchased my PC parts from a shop here on the island. OK, it’s just a guy who makes his living by importing PC parts, and making customised computers for his clients. He has good connections with quite a few vendors overseas. Which is important, as many on-line shops wouldn’t even deliver to Mauritius. He can procure more or less everything. Yes, you pay the remote island tax, but I am used to this now. Also, say, Apple gear is ridiculously expensive here. Don’t get me started. 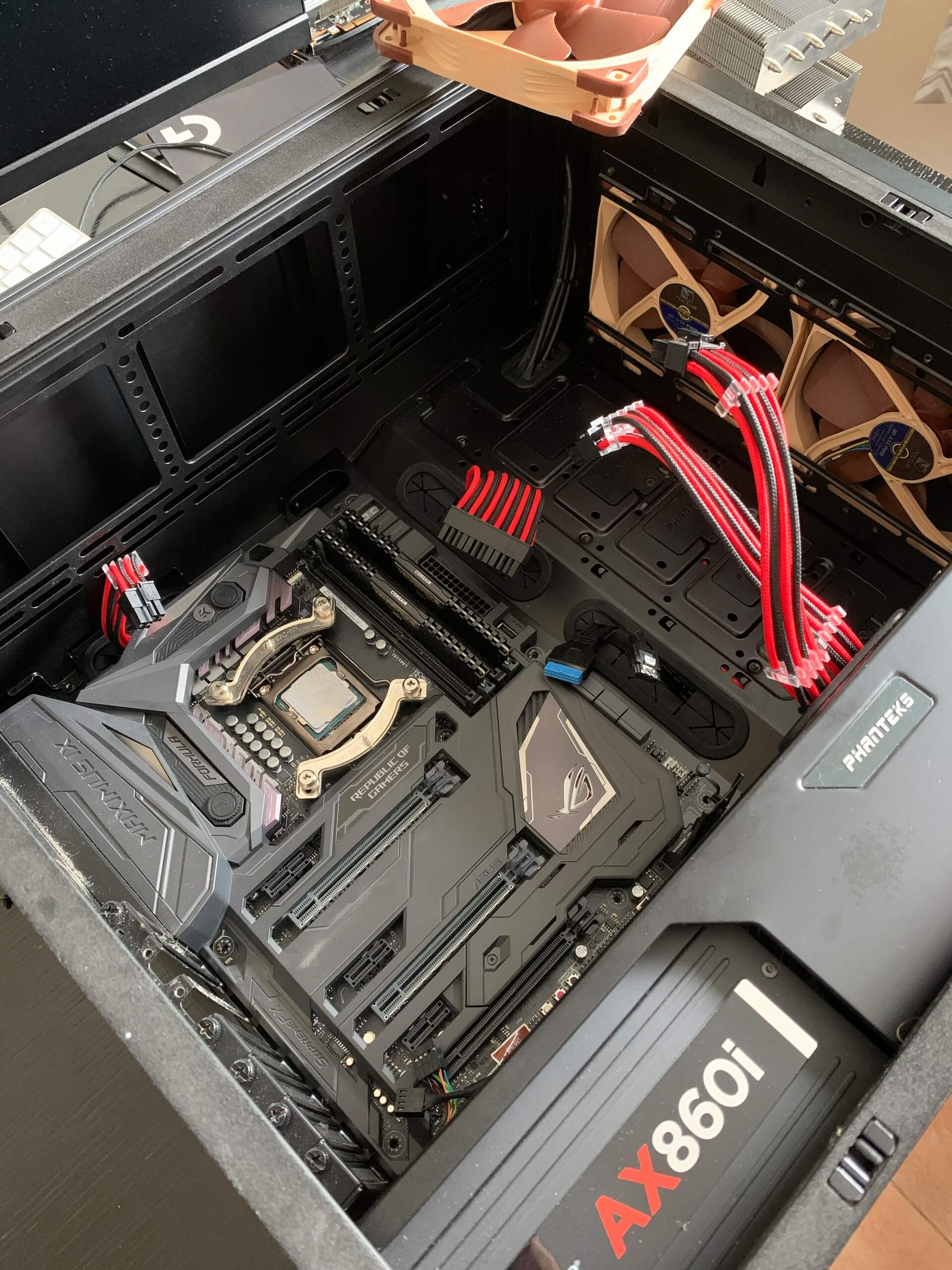 I contacted “the guy” – you never know. His name is Bryan. He told me what I already knew: that my CPU and the motherboard – depicted on the right – were out of production. So independently of where the technical defect was, either board or CPU, I would have to replace both. My CPU is an Intel i7-7700K. It was top of the line four years ago, that is, an eternity in the tech world.

A few months ago I had considered upgrading to a brand-new AMD Zen 3 Ryzen processor. AMD CPUs run rings around the Intel ones these days. Yes, Intel still has very powerful CPUs, but at the price of huge energy consumption, and the price of, well, the price. AMD processors provide the same computing power at way lower energy levels, and cheaper. AMD have not only closed the gap to Intel in the past year, they have run past them, if we consider the overall package.

But by the end of last year, the brand new Ryzen 5 series CPUs were hard to find and purchase. So I put this on the back-burner. I wasn’t in a hurry, my ancient technology just hummed along fine. Until last week, that is.

Now I was put into a hurry all of a sudden, so to speak. Without the Windows PC, no Oberon RTS development work, both software and FPGA-hardware. No joy during the lockdown. I would have purchased anything from Bryan whatever he had readily available, even though my hopes to even find something in stock were minimal. Close to zero. Intel or AMD, I wouldn’t have cared.

To my big surprise, Bryan said he has an AMD Ryzen 5 R5600X CPU and two ASRock motherboard models with the B550 chipset in stock, and he could deliver to my doorstep the next morning. Neither the R5600X nor the B550 chipset are top of the line. When considering upgrading, I had something more higher-end-y in mind. The R5600X is a six-core processor. The B550 chipset only has PCIe 3.0 lanes, but with PCIe 4.0 for the lanes used by the graphics card and the primary SSD – if the CPU provides PCIe 4.0. Which the R5600X does. Obviously, I mostly care about the graphics and the SSD, as these devices directly talk PCIe. PCIe 3.0 for, say, USB is plenty fast.

It was around five in the afternoon by now. I scoured the tests online for both the CPU and the motherboard, and didn’t find anything negative. To the contrary. The R5600X was praised as powerful compromise regarding computing power, energy consumption, and price, for gaming as well as general utilitarian tasks. The ASRock motherboard was generally regarded as very good mid-level product. So, late at night, I confirmed my purchase to Bryan, and he and his brother delivered the next morning to my house.

In hindsight, it’s interesting, or even funny, that due to the restricted availability of the products I might just have purchased what actually serves my purposes, not some overblown configuration just because I can. And “to be on the safe side”, as I don’t really know too much about all this. I don’t follow PC technology in all details ardently. As soon as I have a system up-and-running, I somewhat lose interest. 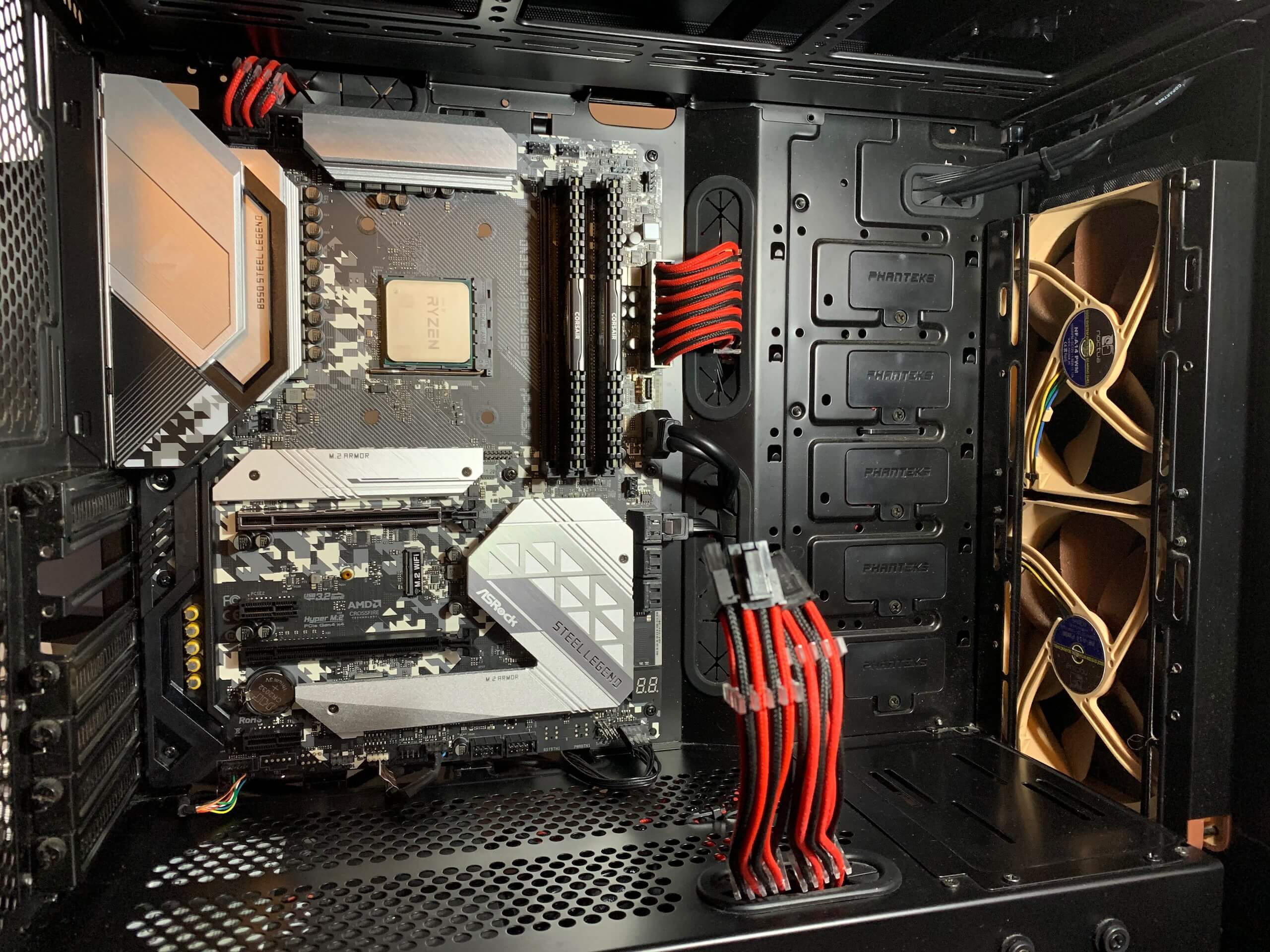 Alas, the day of the delivery was my out-of-the-cage day for lockdown shopping, so the installation had to wait. It then took me about two hours to disassemble the PC as far as needed to rip out the defective parts, and to install the new ones. Luckily, the motherboard manufacturers have some explicit or tacit agreement, dunno, and put the motherboard cable connectors in the same locations. So re-connecting the new board was quick and easy. I consulted the manual anyway to be sure, it’s the first time I have switched motherboard vendor and type. But all was good.

The system booted just fine from the SSD from the old configuration. All programs, configurations, backup disks, and so on where just there, as if nothing has happened. To my big relief, I really don’t enjoy mucking around with Windows. I just needed to install some drivers for the devices specific to the new motherboard, such as audio and network, and I was happily off to the races.

One of the trickier steps is to install the CPU cooler. You need to apply thermal paste between the CPU and the heat-conducting plate of the cooler. You put some paste on top of the CPU, and then put the cooler onto it. Obviously, you cannot check the result of this step visually. 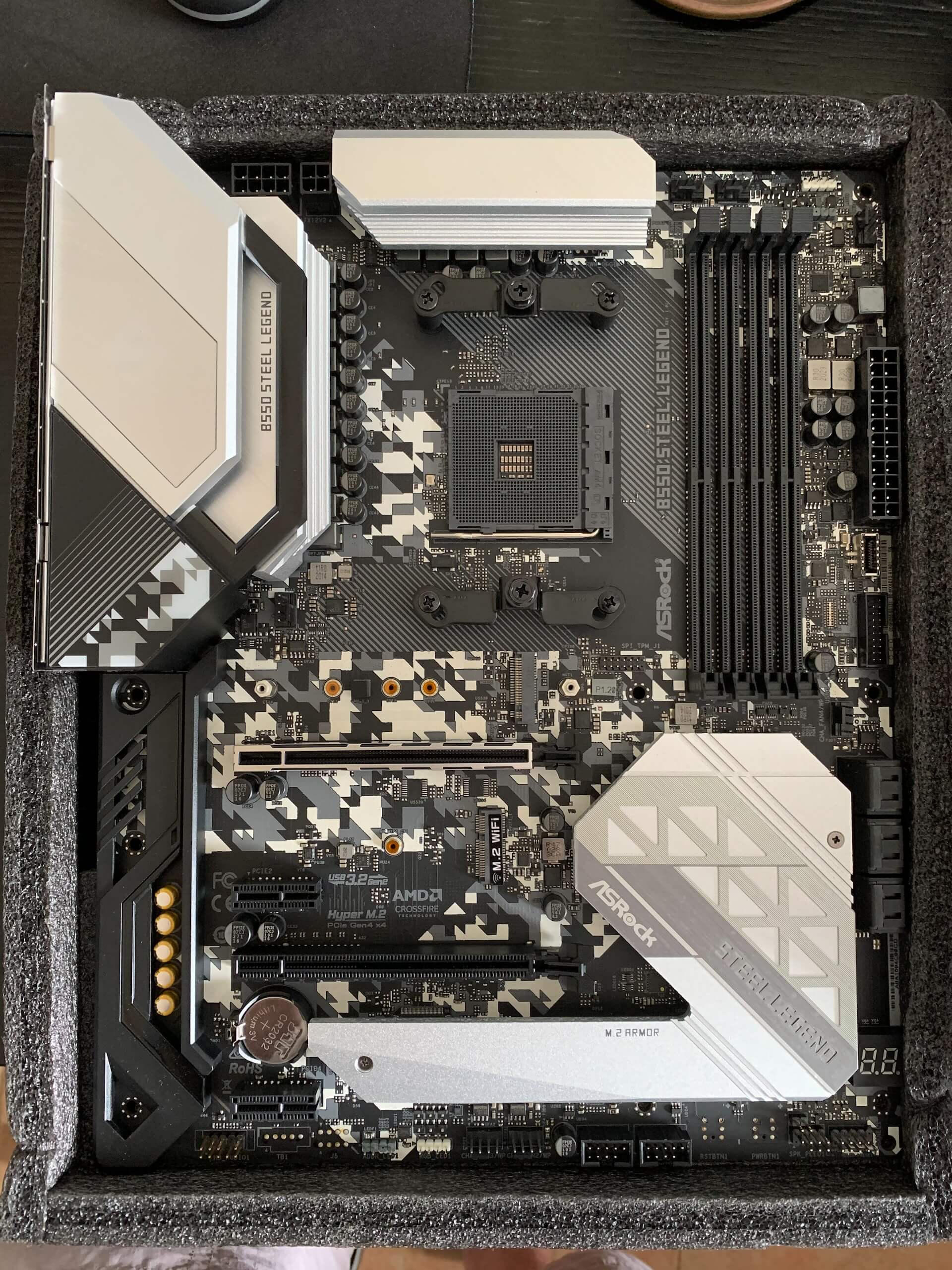 Putting too much paste is detrimental to the cooling effect, and it can spill out of the gap onto the CPU socket. Not good. Putting too little, and the surfaces will not be sufficiently covered, again with negative effects on the cooling. You have to guesstimate how much is probably right, based on experience. The R5600X is a way bigger processor than the i7-7700K, where I had this cold down, so my former experience didn’t help. In general, it’s better to put too little paste, as a spill-over into the CPU socket really is not what you want. Thermal paste does not conduct electricity well. Check out the CPU socket, and imagine the tiny holes filled with paste. Not good. Impossible to clean.

Too little thermal paste will show in insufficient cooling. So the only check possible is to run thermal stress tests after the assembly.

I have a simple, but demanding requirement: the system must be stable with all cores at 100% load and running at the boost frequency, together with the graphics card also running at 100%, without thermally throttling or, worse, overheating. 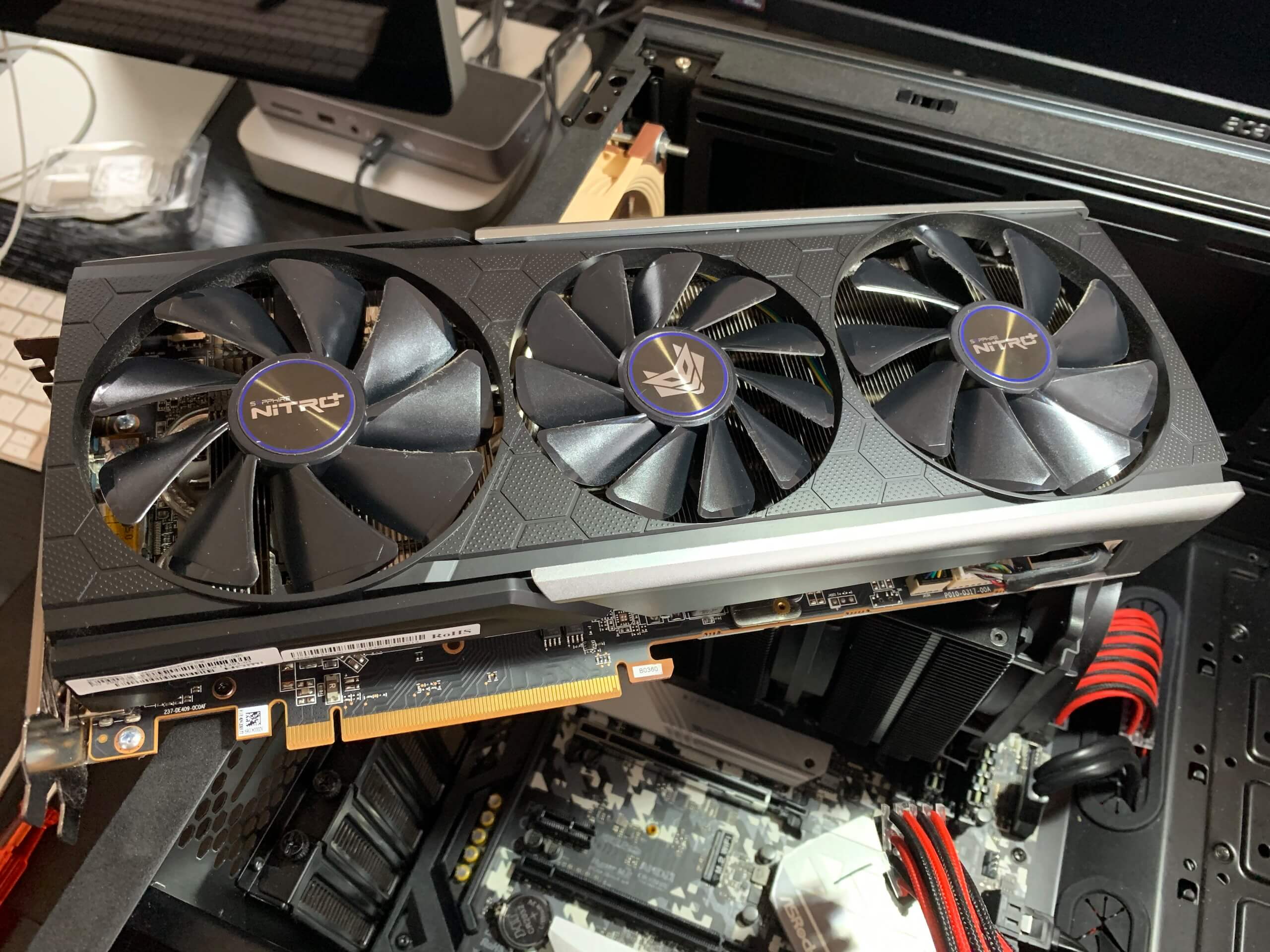 But I want the CPU with all cores to be able to run under full load at the boost frequency, forever. That’s why I put a massive 250 Watts cooler on a 65 Watts CPU. I don’t do this for bragging rights, but if I know the system can withstand that load I am sure it will be OK under any operational conditions. It can get hot here, and I have had my experience with overheating gear. And I know that my thermal paste application was good. I had already visually checked that it hadn’t spilled over.

Adding the graphics card produces additional heat in the PC case. My graphics card consumes a ridiculous 165 Watts when taxed at 100%, and 30 Watts just running the Windows desktop. The combo of CPU and GPU produces quite some heat. In my experience, the GPU looks after itself quite well, but the CPU needs some baby-sitting and tweaking care. 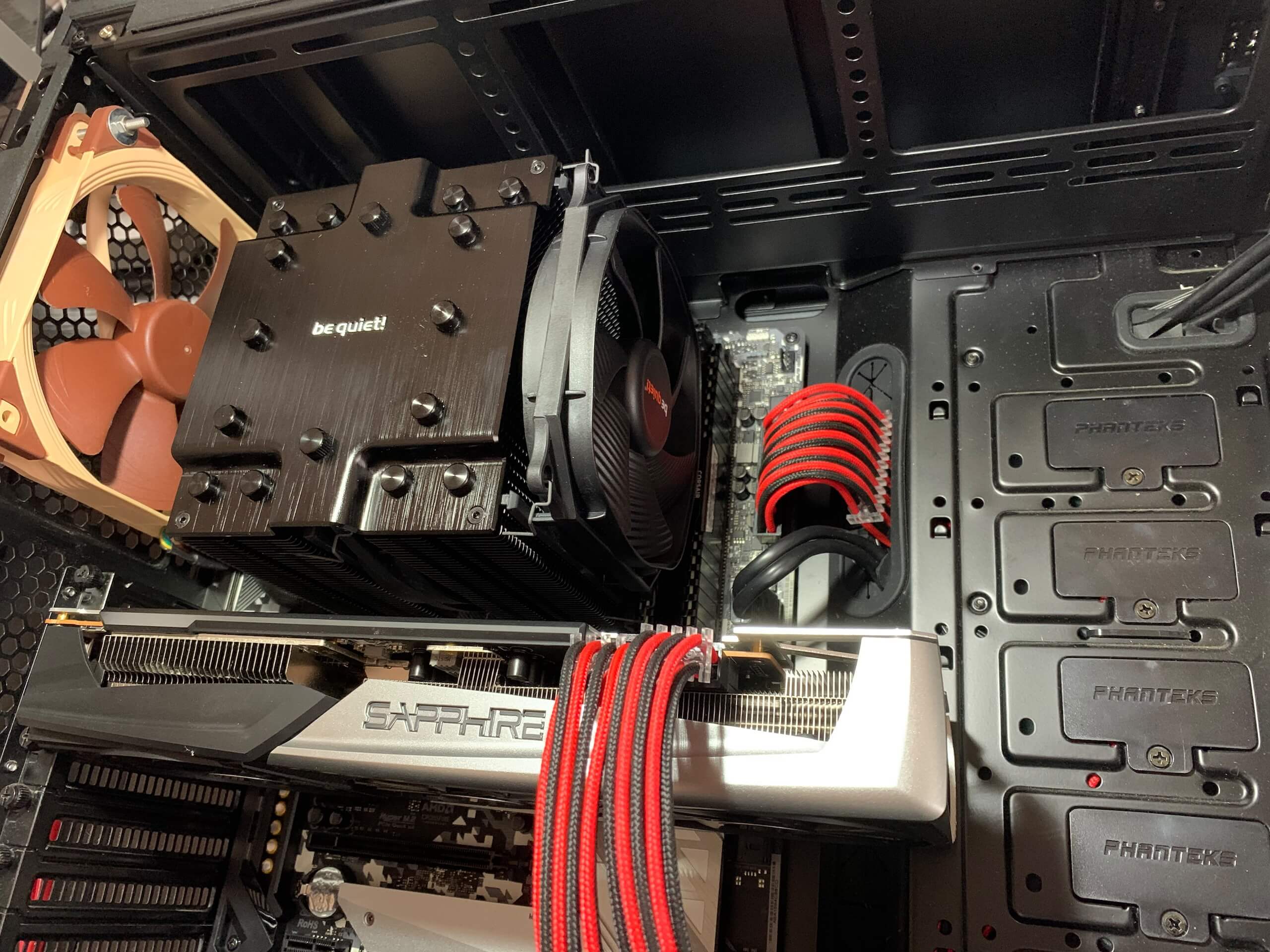 Interestingly, if you look at the relative positions of the CPU and the GPU in the case, the GPU fans will blow part of their exhaust air stream up into the CPU cooler. As mentioned below, the GPU never gets hotter than 70 degrees C, so the additional air stream seem to help cooling a hot-running CPU as well, as adding a high GPU load does not really increase the CPU temperature. In fact, the CPU temperature can even go down a bit.

For monitoring the system under load I use HWiNFO64. The load can be generated with a commercial program such as AIDA64, or freely available programs such as Prime953 and Furmark. Different load generators can produce more or less heat, even under the same 100% load, depending on the instructions they use. eg. including AVX and AVX-512 or not.

I used the AMD Ryzen Master Utility to enable boost frequencies on all cores at all times. I didn’t do any manual “overclocking” nonsense. For starters, todays’s system are plenty powerful out of the box. Also, a modern UEFI, ie. the motherboard firmware, has quite good functionality to get the most out of a system on automatic settings. And it keeps vital and potentially dangerous values, such as the CPU and memory voltages, in a safe range. So I simply couldn’t be bothered. Not even for bragging rights.

Long story short, after gradually increasing the load, and adjusting the fan control curves in the UEFI, while monitoring the system carefully, I have confirmed that my specific system fulfils my requirements. Whatever I do, the CPU temperature never goes over 90 degrees C, and the GPU stays below 70 deg C. 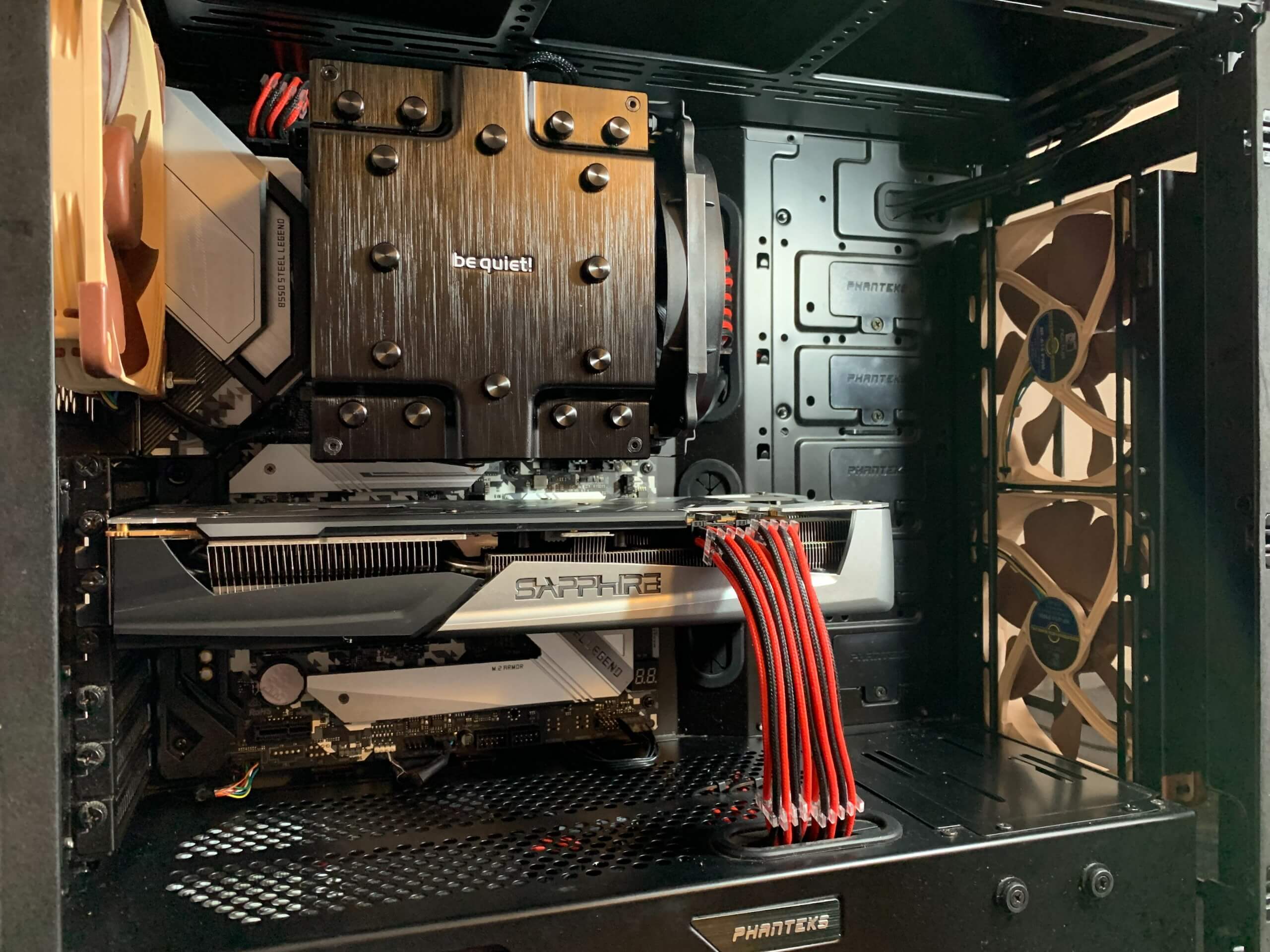 As an aside, check out how basically empty that case is, even when everything is installed. All slots for spinning hard-drives of the days or yore on the right hand side are empty. The SSDs go into M2 slots directly on the motherboard. Of course, lots of empty space is good for the airflow across the case and the cooling. Obviously, the fans on the case and the ones one the CPU cooler blow into the same direction, from right to left in the picture.

Completely unexpectedly, I was up and running again after not even two days, PC-wise. And with a system that is generations ahead of my former one. Even though it’s not the “high end” system I probably would have built under normal conditions. Which I think is a Good Thing.™

Repair/upgrade cost: about 700 Euros. Including the far-far-away island tax. And prompt and friendly next-day home delivery. Mauritians are very friendly and helpful in general.