Towards the Dark Side

My MacBook Pro has gone belly up again. Ouch. Nothing appears on the screen or any attached display, even though it seems to boot. I tried every measure and trick, all obvious and the not-so-obvious ones, including some secret arcane incantations. I suspect it’s the graphics processor or some related components. At the moment, the MacBook is at the shop for further inspection and repair.

I am using my old-ish, 2011 model right now, which I simply started from the bootable backup disk image. It’s slow, but hey, it works.

I have since investigated the situation, and I have come to the conclusion that I probably push my laptops too hard for the climate conditions here. Remember, I had the bloated battery issue about a year ago, which might also have been a result of heat.

To be clear, I am using the MacBooks within their specified operation range, which is 10 to 35 degrees Celcius, if towards the upper boundary. I ran monitoring and stress test software to check what’s going on. I had to do this while using Windows, as there are good tools available from Intel and others, but not for macOS. Same for stress testing. Just monitoring the load levels of the CPU is simply not sufficient, I needed to see temperatures and what’s going on with the clock frequency, as with today’s main processors (CPUs), the clock frequency is being adjusted mainly to meet processing demands, but also thermal limits (for some limited testing and insights on Macs, there is Intel’s Power Gadget for some limited monitoring, and you can use Handbrake to stress the CPUs). 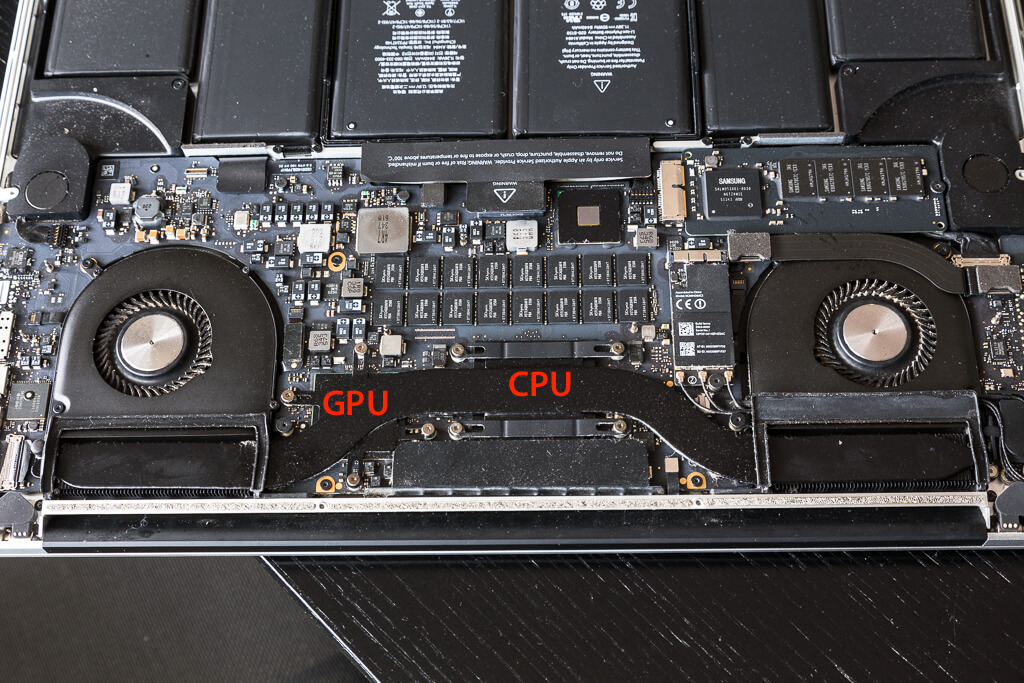 The main processor (CPU) and the graphics processor (GPU) are among the main heat sources of any computer. Considering the space available inside a laptop computer, to get rid of that heat is an engineering challenge.

The picture to the left shows the position of these two processors in my 2013 MacBook Pro, and you see that there is a metal bar on top of them that conveys the heat to two small heat sinks on the left and right hand side, which are cooled by the respective fans.

Actually, this works quite well – mostly, see below.

If I push the four CPU cores to 100% load, but don’t do anything graphics-intensive, the processor stays within its specified thermal limits (which is an incredible 100 deg C!), and it operates at its nominal clock frequency of 2.6 GHz. So far, so good.

However, on the operating system level (macOS), there is some safeguard against overheating, and I have seen this kick in again and again, meaning that the described cooling system works at its limits, but sometimes is overwhelmed, and the safeguard kicks in, which slows the Mac down, which is annoying if I want to get work done. I understand the rationale behind that safeguard, but it’s a hack to work around hardware limitations with the cooling. The CPU is humming along at 2.6 GHz, and thusly meets is specs, but the OS is “stealing” a few CPU cores to work on low power, useless stuff to avoid overheating? Come on, Apple.

The real problem starts, however, when the graphics processor (GPU) has to do real work, and adds to the heat, for example, when working on pictures, or playing a game. Now, the cooling system is completely unable to keep the heat in check, and the CPU’s clock frequency is lowered to 1.2 or so GHz, sometimes even lower, in order to avoid overheating, even at full speed of the fans. To me, this looks like a technical design not meeting the promises of the spec sheet, or what I would expect from an expensive computer. Again, I know I am pushing it, but I work within the specified operating range.

Don’t use a friggin' laptop then! Right. Right? I don’t expect that an iMac would behave much better, given Apple’s mania to make everything thinner. Sure, inside an iMac there’s somewhat more space, but not that much. OK then, what about a Mac Pro?! In the Olden Days, this would have been the obvious solution. Get a cheese-grater Mac, and you’re off to the races.

The old Mac Pro had huge coolers for the CPU, and you could install whatever graphics processor card you wanted, as it had a PCI bus. The case was vented by big fans. A powerful, flexible system, adaptable to the user’s needs. 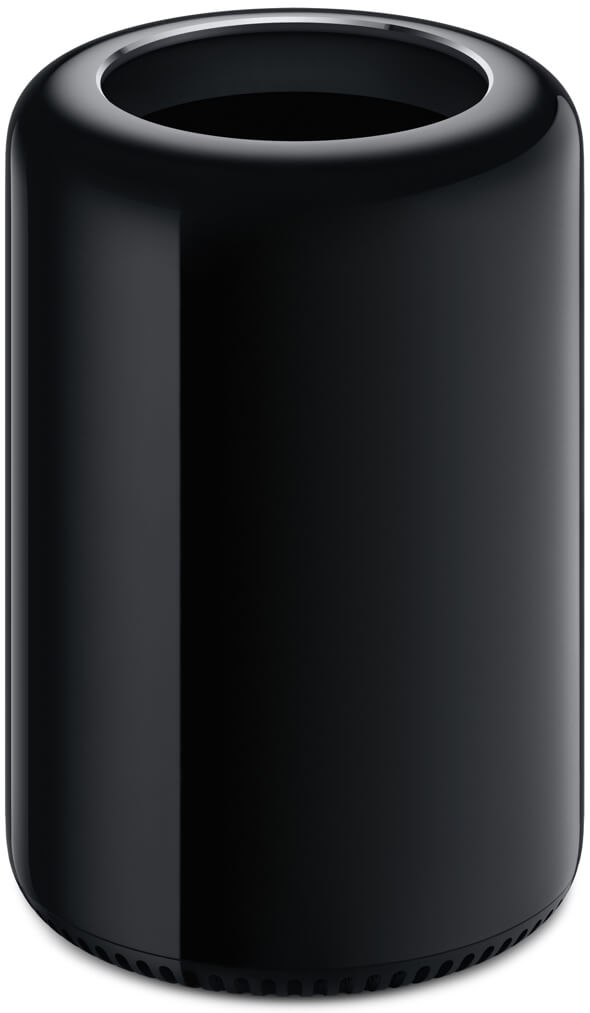 In 2013, Apple introduced a completely new Mac Pro. While powerful (at the time), with great and silent cooling, it was not adaptable to user needs. Cute looks though. Want a different graphics card? Out of luck, no way. Install a more recent CPU? You wish. It’s a un-upgradable device, like an iPhone, iPad, or MacBook Pro. Worst of all, that machine has not been updated since – wait for it – 2013. It’s completely outdated now. And its future is pretty unclear. Apple seems to focus more and more on “what 80% of users” want. I heard reports of many power users that start to look elsewhere, as Apple simply does not provide anymore what they need. It’s depressing. 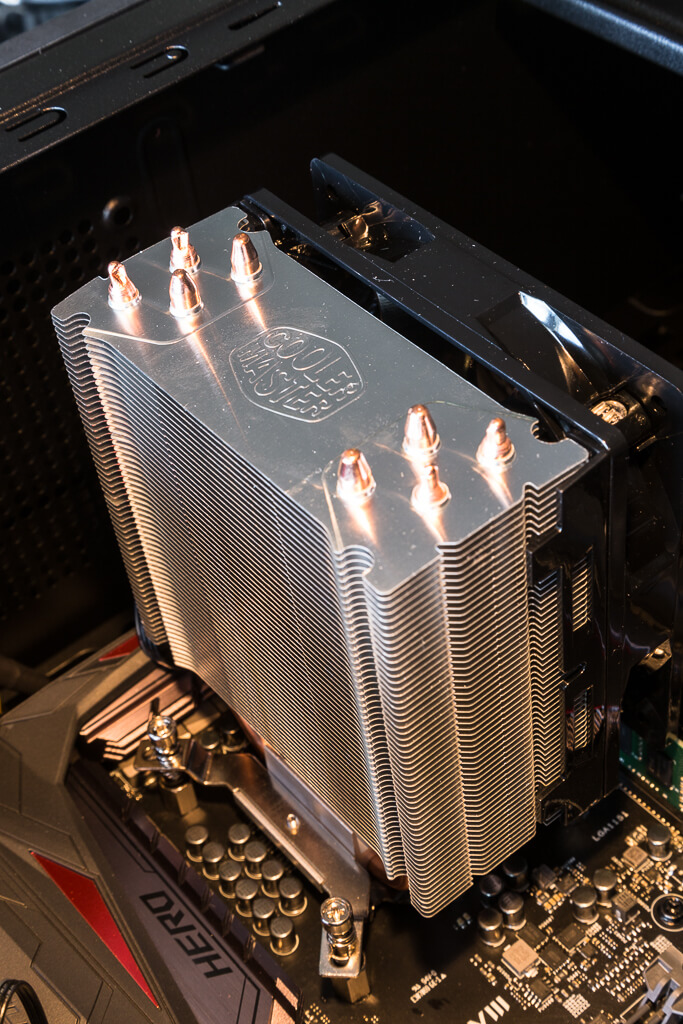 Looking elsewhere? There’s Linux, but for desktop applications? Not really. Which leaves Microsoft Windows. The Dark Side. Since I started to look into the topic – and I now know more about CPU cooling, thermal limits, graphics cards, and stuff than I ever cared to before – , I have discovered that there is a vibrant market for components to build powerful Windows PCs. And no, it’s not household-name type vendors like HP or Dell here, it’s companies like Corsair, NZXT, CoolerMaster, MSI, ASUS, SilverStone, or Phantek. I didn’t care, Macs just worked… It’s easy to purchase the components and assembly exactly the computer you want. The only disadvantage: it runs Windows!

As the topic of this post is cooling, let’s look at what high power cooling really means. Look at the CPU air cooler depicted on the left. For reference, it’s about 16cm high. It has a fan attached to the right. There are even easy to install water coolers. 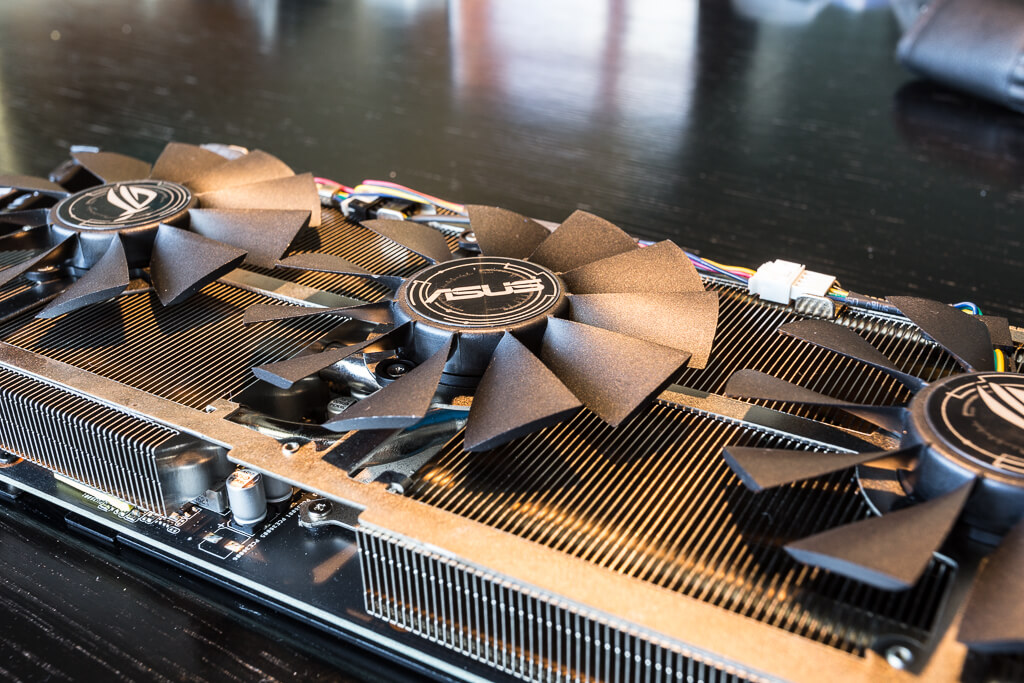 Or the graphics card on the right, with its massive heat sink and three fans. That’s only for the graphics processor! It’s about 30cm long.

To be clear, I am aware that these are components which are way out of reach for any notebook computer regarding performance. Different classes. It’s just to demonstrate that cooling requires space for heat sinks and massive air flows, which notebooks will never have.

The conclusions? When I get my MacBook Pro back, I must not push it anymore so hard. Use it for reading e-mail, writing blog posts, and the like. Some photo development and correction would be OK as well, I guess. I do operate within specs, but the thermal design sadly is not good enough to meet them for graphics-intense workloads. I don’t know if newer MacBook Pro models are more stable thermally, but given that they are even thinner, I doubt it, especially in tropical climate. For a real graphics workhorse? I don’t think that Apple will announce some cheese-grater class Mac anymore, given their recent direction. If they do, it would be a huge surprise, not just for me. Hence, I need to look elsewhere. See above.