For the record, we’re at over 4.2 million reported Covid-19 cases. We’re now in influenza territory. But – the big but – the WHO figures cover a period of one year. Yes, most flu infections happen mostly in winter, but there are winter or winter-y conditions twice a year, namely in the northern and in the southern hemisphere.

The Covid-19 pandemic, however, was an onslaught of yearly flu numbers that happened within a few months, which makes a big difference. Just comparing average numbers does not tell the story of the momentary intensity. It’s one of the many things I had to learn in this context. I would word this differently today.

Recently, we get all those “smart” opinions of everyone and their dog,1 from all over the world, how all the measures were, and still are, completely exaggerated, because the mortality of Covid-19 is actually not so bad, or that a lot of the hastily prepared additional hospital beds are not even used, and so on. I am sure you have come across this kind of message.

I am afraid they are missing the point. Two major points, actually.

Here’s the scenario. It’s February, and you’re responsible for a country, a state, a region, a community, or just a retirement home for the elderly. Whatever your scope, you are responsible. Not just uttering clever opinions, making YouTube videos, or writing blog posts like this one. And you take your responsibility seriously, as in, you care for the people, not just the numbers potentially impacting your re-election chances. From China, later also from Italy, or New York, you get incomplete and uncertain, often even contradicting information, changing rapidly from day to day. In any case, it looks potentially really dangerous. You have no idea how quickly the disease will spread, how sick the patients will get, and how many will die. You don’t know how much, and what kind of, support you will get from outside. You are not sure how your medical facilities will hold up when faced with an onslaught of infections.

But you have to make decisions today, right now. Remember, you’re responsible. Of course your counter-measures, in particular the pro-active ones, might turn out to be over the top – when looking back. That’s the very nature of emergency measures – but they give you the time and opportunity to think, observe and analyse, and then put more targeted measures in place. Yes, you can take the opposite stance, wait and see, and this approach might even turn out to be the right one at the end. But right now, in February, at the beginning of a potential catastrophe, this is a gamble.

Now, with the knowledge and data we have today, many measures appear too strict. Yes, hospital beds remained unused as of now, to remain with that example, at least in certain countries. Which brings me to the second point.

The success of the measures is actually measured in the number of unused beds – empty hospital beds are a Good Thing. They show that the strict, “excessive” measures have worked. Or potentially worked. Who can tell right now, still so early in the process of handling the pandemic, and potentially before we have a second wave of infections with loosening the emergency measures.

If you’re worried about the emergency measures being excessive, what do you tell the overworked and badly protected medical personnel, who had to keep patients in the hospital hallways (Italy), or had to store dead bodies in refrigerator trucks in the hospital parking lot (USA)?

Hence I think is disingenuous to slam the responsible people now, with the benefit of today’s hindsight. And also comparing all those average case numbers of the different common and known diseases or accidents with the Covid-19 ones. Health care systems are designed and built to run more or less at full capacity to cope with all these common health issues. No hospital will keep, say, 20 percent of the beds and facilities empty, but maintained and ready for such a pandemic, if they have to turn a profit, or at least run at cost.

I remember to have read an article back in the beginning of March. The author’s major point was that if the measures work, they will seem excessive in hindsight – exactly because the outcome was not as bad as feared. You can’t win this one.

Sweden had chosen a different path, with no lockdowns, and keeping their shops open. I listened to an interview with a Swedish doctor the other day, and he admitted that they have too many deaths among the elderly.

He also reported that most of the residents of Sweden adhere to strict protection rules on a voluntary basis. In his opinion this responsible behaviour on a personal basis is actually motivated by not mandating lockdowns, but by appealing to the responsibilities of each citizen individually. Which is a good sign for a society.

On the other hand, check out the recent case figures for Sweden, as they start to become more worrisome. Something to keep an eye on in the coming weeks. I really – and I mean really – hope for their success, as it would be a success for a mature, responsible society of the kind I envision for all of us in the future.

The State of Things

Here are the current figures for Mauritius. The curves resemble the ones from successful countries such as Austria or Australia. 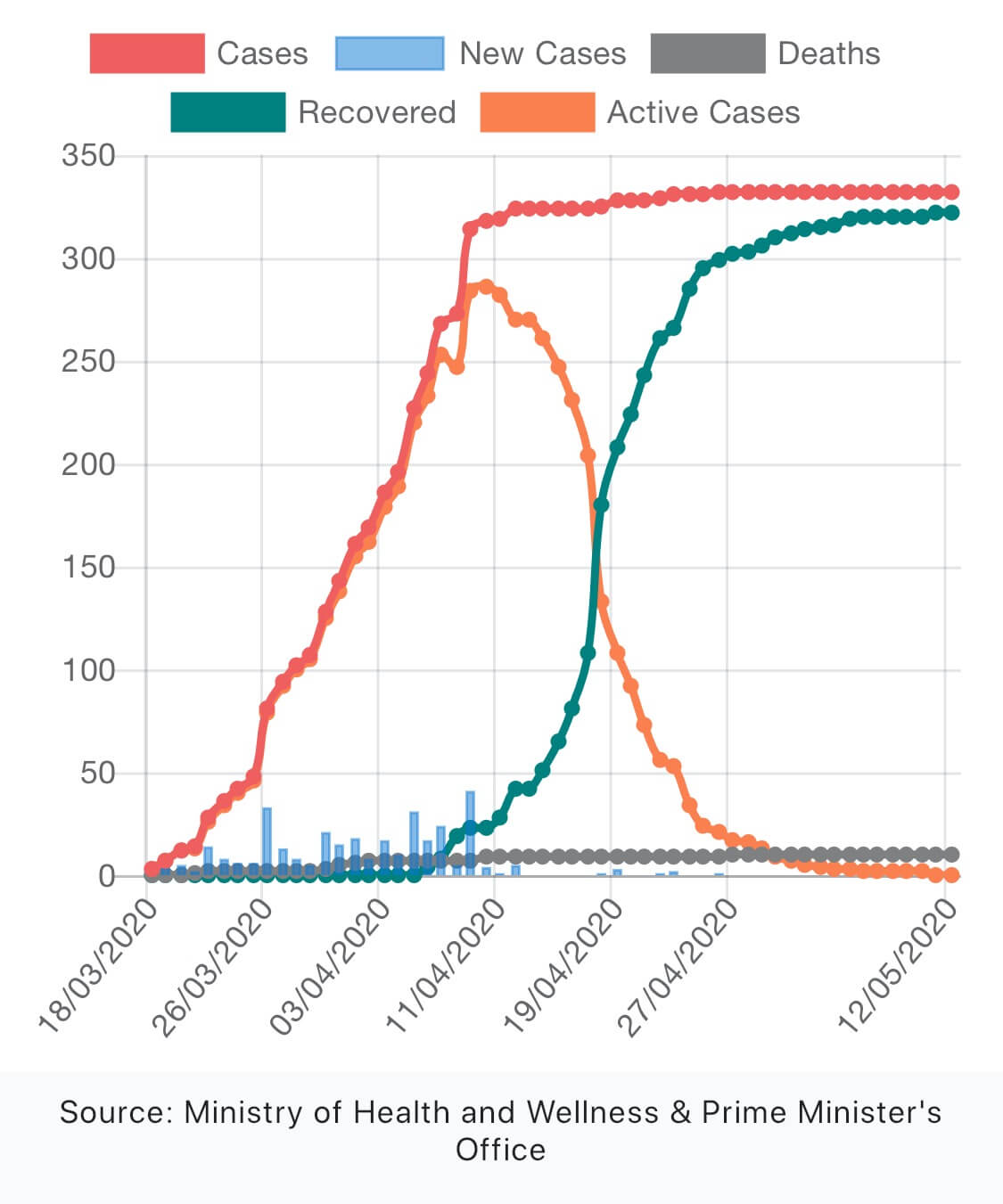 We still are under a pretty strict lockdown, but there’s a stepwise opening starting now.