We are on our way into winter again. May tends to be a beautiful month, temperatures down to 25 to 27 degrees, lots of sunny days. Again and again, I am surprised how a change of a few degrees feels so different. At 30 degrees it’s warm, and 33 hot, and at 25 I have to put on socks, and pull out the thicker bed cover from the closet. And if I don’t heed the last point, I easily catch a cold, as I did last week, especially if it’s a bit windy at night. Ayo. Getting better, though. 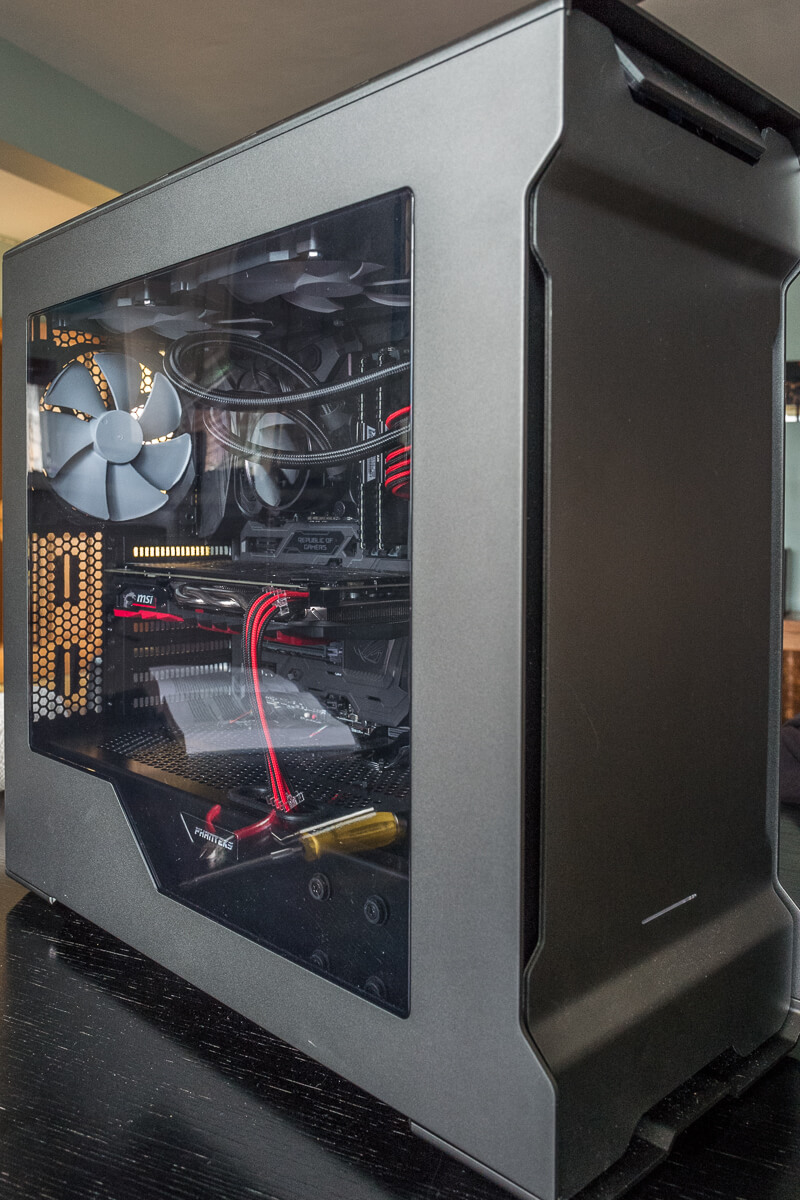 During the past weeks, I have been tinkering. In particular, I have assembled a PC. Yes, yes, I know. But not just any PC, not a “business PC”. A beefy PC suitable for graphics and video work, and gaming. I had never before built such a thing, and had no idea. I mean, how can you even know what you want, what your requirements are, if you don’t know what’s out there, what components are available. So I spent lots of time on-line to learn and find out. Being an engineer, who has created both hardware and software back in the day, helps, of course. Nevertheless, I spent days and weeks to learn and specify what my requirements mean, technically, and how they translate into components that I can purchase.

Purchasing high-end PC components here on the island turned out to be yet another journey. If you’re living in Europe, or the US, that is straight forward, there is a gazillion on-line shops. On a small island in the middle of the Indian Ocean, not so much. The shops in Europe and the US won’t ship to Mauritius. I finally found a tiny shop here – basically a guy – with good connections to European partners, which could deliver all I wanted, and even the exact products I wanted. For some time, before I found that guy, I thought I’d need to adjust my needs to the availability of components, or bring the good stuff over myself from a visit to Europe.

Prices, however – don’t ask. Talk about a tropical island tax. 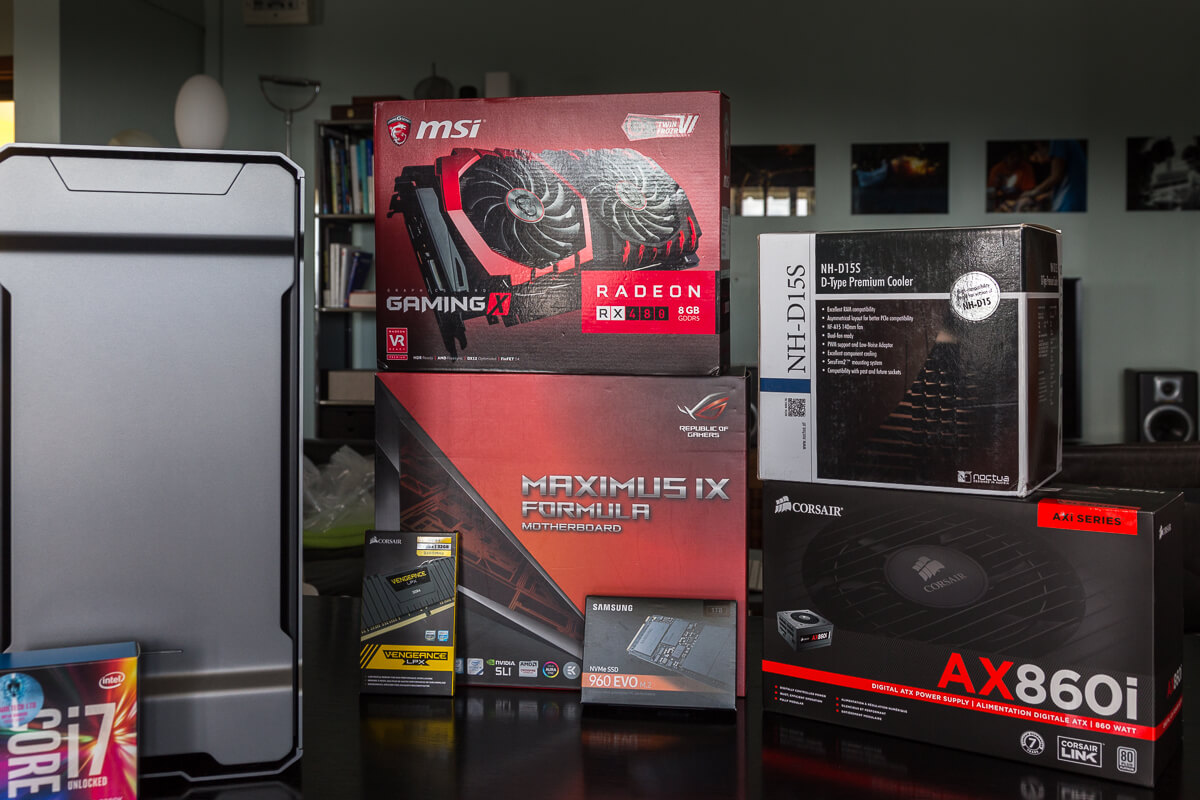 Bottom line, you need an astonishingly small set of components: a motherboard, a processor (CPU), a graphics card, memory (RAM), storage (“disk”), a CPU cooler, a power supply, and a chassis. Plus the Windows operating system. A motherboard – which is a weird term if you think about it without the techie tin-foil hat on – is the basic electronics board that connects all the parts, that makes them to be, and act as, a PC, and not, say, a video console. 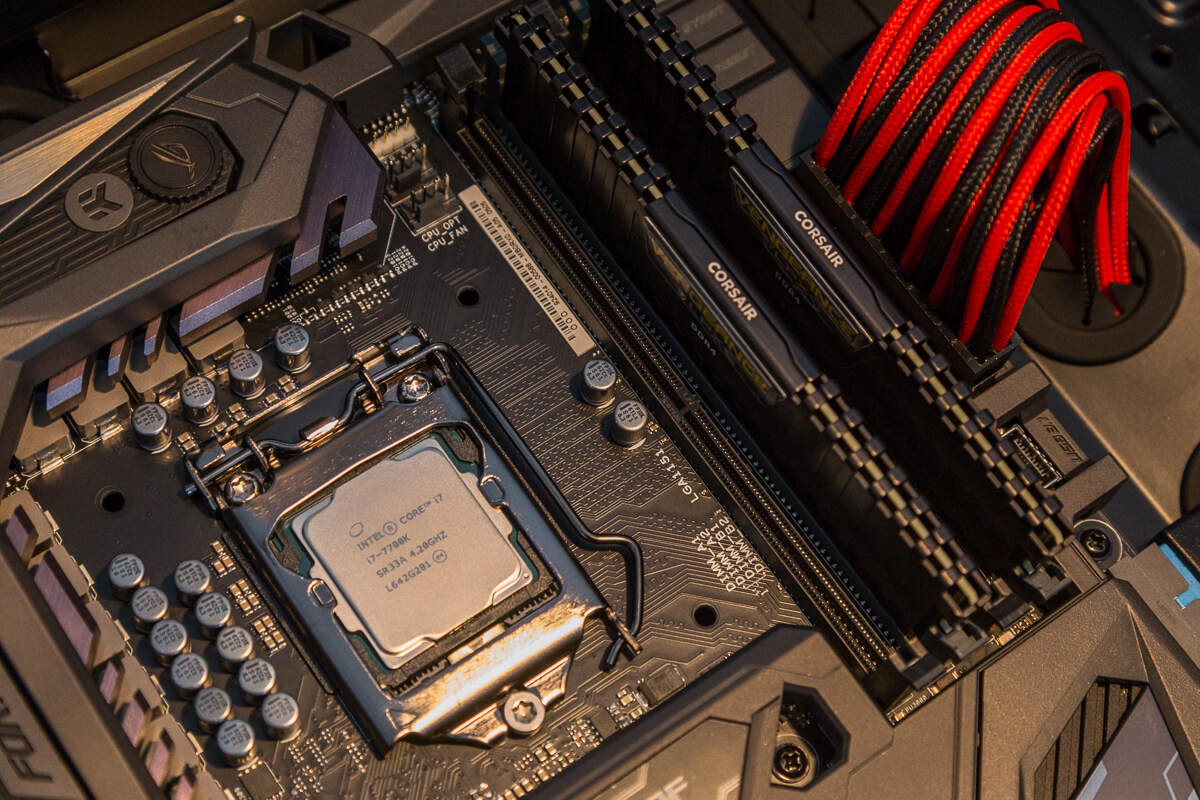 After receiving all my parts and components, delivered to my home by said guy from the small shop – his father was driving the delivery truck! – on a Sunday morning, I set out to assemble the machinery. I really, really enjoyed it! It reminded my of the days when I did real engineering work, not the ever-so-chatty, often BS-filled work in “enterprise IT” that made me lose my motivation for my work at the end.

Then, big moment, flipping the switch – and the thing booted into the firmware (low-level software) on the motherboard! Yay. Thereafter, installing Windows is pretty easy these days, even without a CD or DVD drive. Thanks, Microsoft. (I mean it, no sarcasm here.)

Thereafter, the testing starts. More tinkering! Sure, it’s nice to experience that all basically works, Windows and all, but this is supposed to be a high-performing machine, so you really, really want to make sure it also works under high load and at its limits. As described, this is mostly about thermal stability and thus cooling.

Luckily, there are arsenals of tools available for Windows for that kind of testing, both to put insane work loads and stress on the processor and the graphics card, but also to monitor what’s happening when you do. So I set up my test lab… 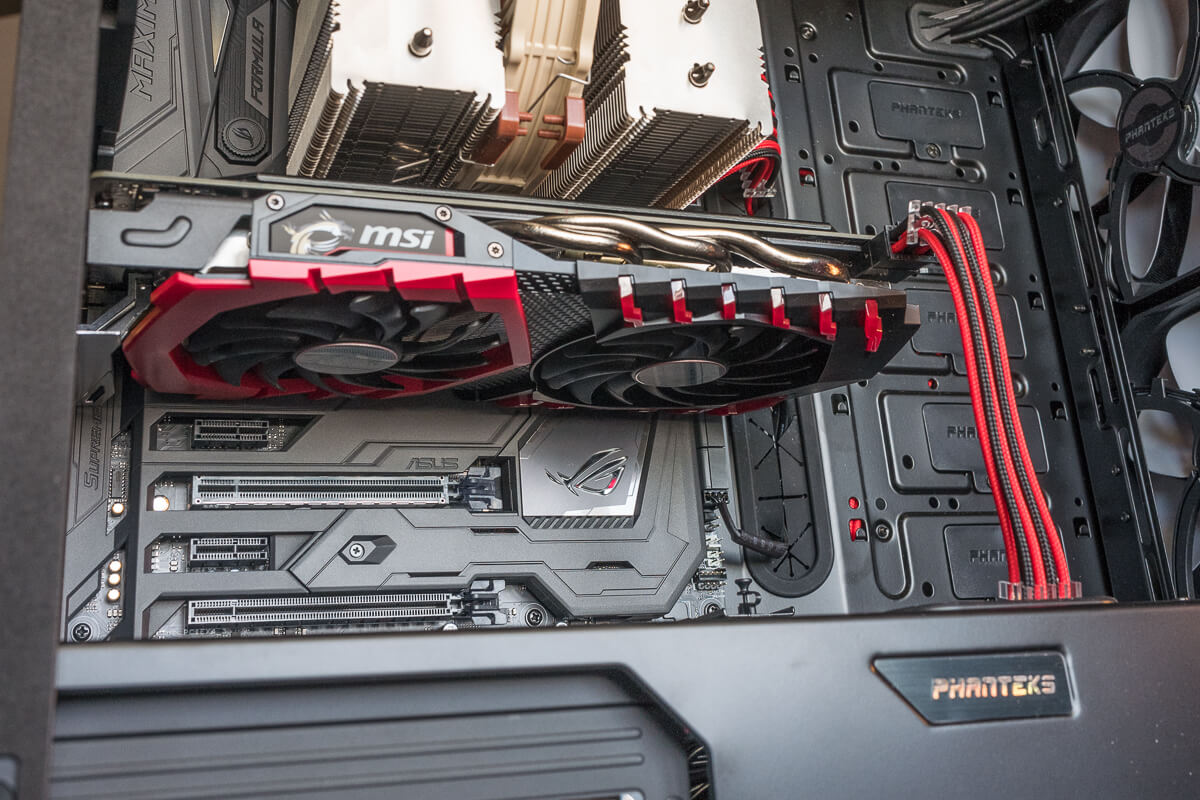 The graphics cards with the graphics processor (GPU) – it’s the board with the “msi” brand in the picture – are engineered in a way that they can look after themselves, more or less. They come with heat sinks and their own fans, and are autonomous in that regard, using firmware-based control software to adjust the fan speed to their cooling needs . Of course, if you have too much heat inside the case, they would reach and possibly exceed their thermal limits, no technology can work around the laws of thermodynamics. Hence the chassis itself also needs fans to pull in cool air, and push out the hot one. It’s a good idea to keep an eye on the GPU temperatures also when stress testing the main processor, the CPU.

Which brings me to the CPU cooling. Just a chip in a metal casing, and the cooling is completely up to the PC manufacturer, or in my case, to me. I had purchased two variants of CPU coolers, an air cooler, and a liquid cooler, to be able to collect experience with both, to use grand words, or simply to – you guessed it – tinker some more. :) 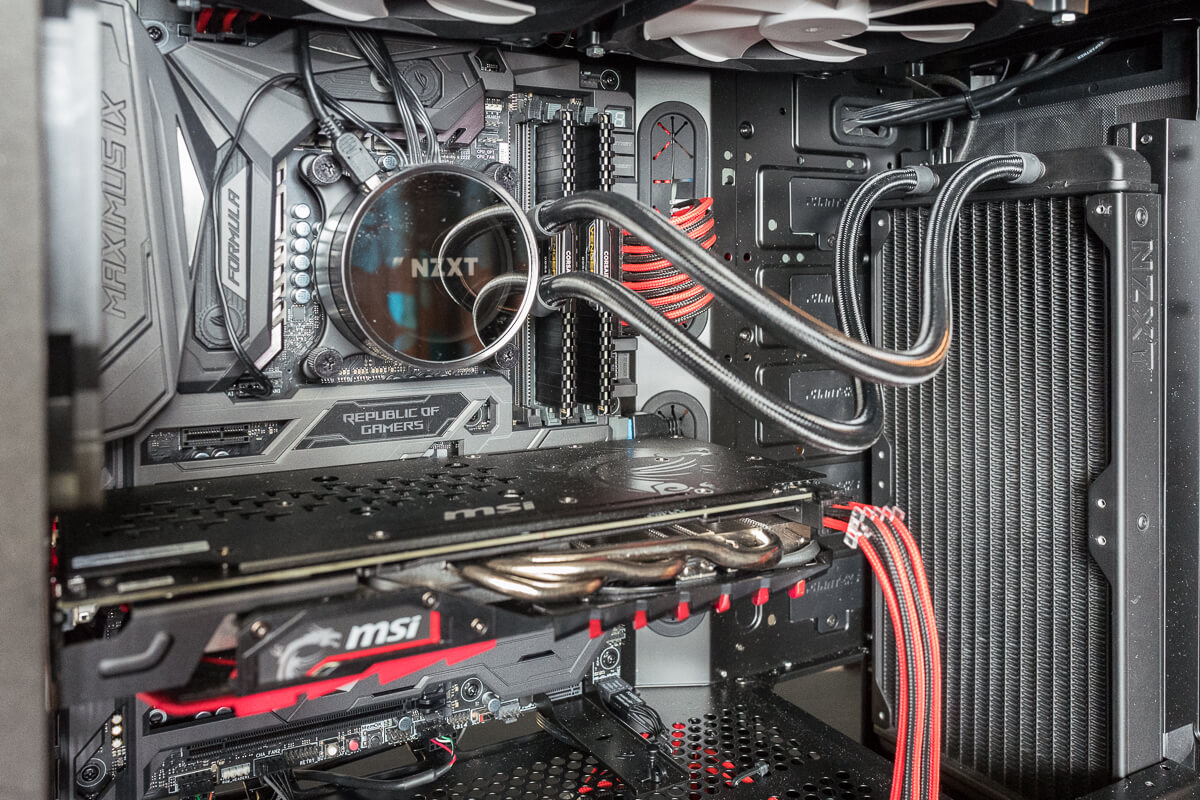 As the picture shows, the liquid cooler consists of a pump with a heat-conducting block that sits on top of the CPU, a radiator that serves to cool down the liquid that gets pumped through it, and the necessary tubing. The radiator has its own fans. It looks, and works, like small version of a radiator you also find in cars. Pump and fan speed need to be adjusted to the actual heat produced by the CPU.

Of course, they could run a full speed all the time – as could all fans, also the ones on the graphics card and the chassis –, but here another requirement comes into play: the PC must be as quiet as possible, whenever possible. It’s OK if the fans spin up under heavy load, but otherwise you don’t want to hear them. Hence the load, and thus heat, based control mechanisms for pump and fans, which you also find for the air cooler, described next. 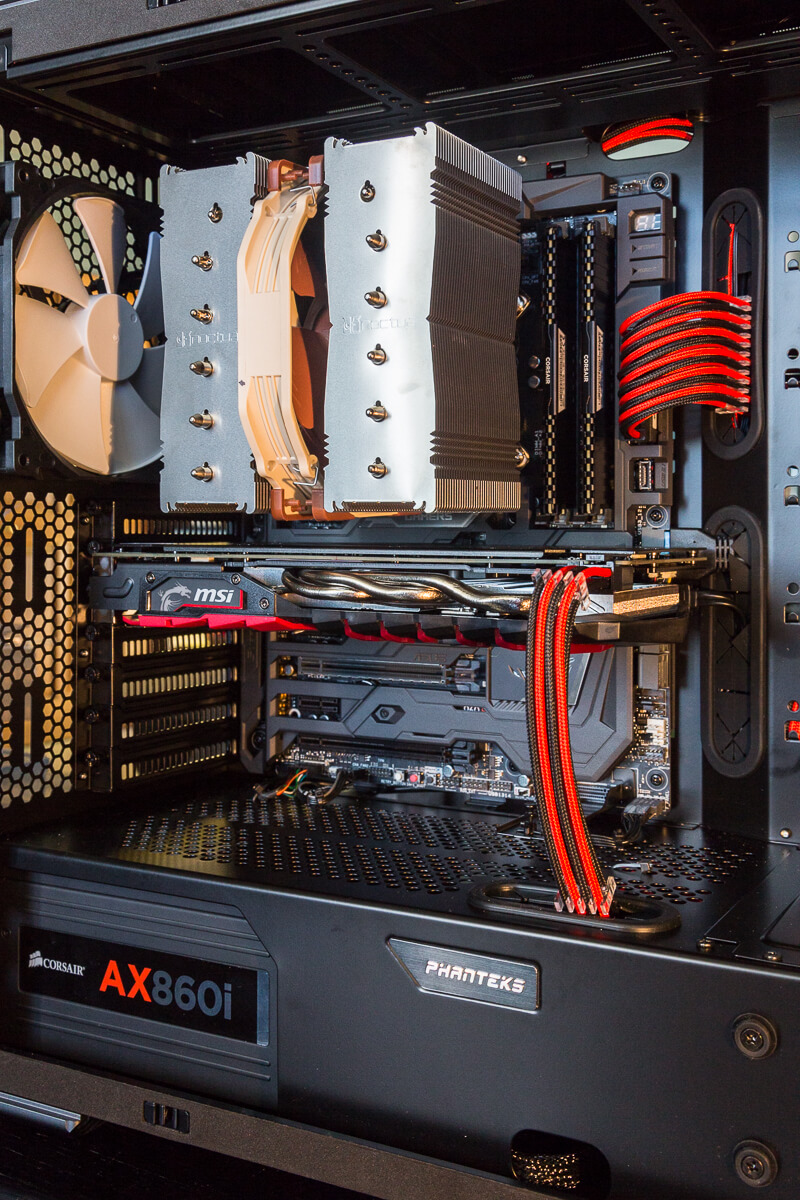 The air cooler, on the other hand, is simply an elaborate heat sink, which transports the heat away from the CPU using a metal plate sitting on its top, heat pipes, and stacks of metal lamellae, which are cooled by a fan, which sits between the two lamella stacks with this cooler.

It’s a bigger version of the cooling found on the graphics card. It’s a very simple construction, in principle, but I think to make it effective and efficient requires a lot of know-how and experience by the manufacturer.

What I really love is that this machine is under my full control. The firmware of the motherboard and the graphics card allows me to dig in, and adjust and tweak nearly every aspect and parameter. I can change clock frequencies, even single voltages of the CPU, the GPU, and the RAM. I can adjust temperature control curves. And so on. It’s me who decides if I want to operate the PC at its thermal limits, even beyond the specifications of the single components, and find the balance between performance, stability, and fan noise that suits me best. I can replace and upgrade parts, if I want.

I didn’t expect that, but tinkering with my new PC and its set-up has brought back good feelings – and memories – about what I once was, a real engineer.